A new methodology for measurement of lung vibrations

In what appears to be the first step towards a radiation-free, non-invasive technology, Vibration Response Imaging (VRI) has arrived. VRITM, an innovative technology developed by the Israel-based company, Deep Breeze Ltd, can create images of the lungs based on the sound of air moving in and out of the passageways of the lungs, thereby preventing exposure to radiation in diagnosis.

In the hands of a trained physician, the stethoscope has been an excellent tool to assess the air moving through a patient’s lung. But its usefulness is limited due to the range of audible frequencies as well as outside interferences. The VRIXP™ is a unique new lung imaging system developed by Deep Breeze in Israel. Based on the science of Vibration Response Imaging (VRI) technology, the VRIXP™ produces dynamic lung images at the bedside without the use of radiation.

The VRIXP™ is a portable system that uses an array of 42 multi-use transducers, which are placed on a patient’s back. The array is used to measure the vibrations generated from the acoustic energy developed as air passes through the lungs. The data for producing an image is acquired in seconds, it is a quick and easy procedure performed by a technician, much like an ECG. Along with producing an image, the ultimate goal is to correlate that image with a numerical scale namely Quantitative Lung Data (QLD).

The first target of the VRIXP™ system will be the monitoring of lung sounds. This will allow physicians to detect what is going on in a patient’s body and aid in evaluating the outcomes of procedures. Future applications include the diagnosis and management of asthma, lung cancer, lung transplants, pneumonia, COPD, and the ICU management of mechanical ventilators. In the ICU setting, physicians will have an easy-to-use technology to assist them in determining the lungs’ condition, response to therapy and to evaluate optimum ventilation settings. This should result in better outcomes by assisting the physician in the reduction of ventilator-related pathologies. This will also allow patients to be weaned off a ventilator more quickly—a key factor in improving outcomes for ventilated patients.

As with any technology used on an inpatient, the cost per use is important due to the capitated payment structure most hospitals face. Along with the system’s ability to offer a unique, safe and new technology for lung assessment, the VRIXP™ also has a very attractive cost per use. This is due to the reusable sensor array and the limited labour required. Based on 1,000 tests per year, a facility should expect to see costs of approximately US$24 per patient. Lower use applications such as long term monitoring would see costs of US$80 based on 200 tests per year over a five-year period. The system is currently selling for US$50,000 in Europe.

Lung disease is the third most common reason for hospitalisation in the US alone. Lungs are an internal organ but are constantly exposed to the outside environment. Because of this, they are susceptible to multiple forms of disease. Over 35 million Americans are living with chronic lung diseases such as asthma, emphysema and chronic bronchitis. Each year around 350,000 die from these diseases. These numbers will continue to grow as the population ages and environmental factors come into play more often.

Lung disease is also very costly to treat. It costs Americans US$81.6 billion in direct healthcare expenditures plus US$76 billion in indirect costs. These combined factors make lung treatment and diagnosis of lung disease a major focus of researchers. Some of the most common lung diseases are COPD, pneumonia and chronic asthma. These diseases account for over 750,000 hospitalisations each year. COPD is most common in patients over 47 years of age and treatment is reimbursed by a combination of Medicare and private insurance. The most serious and costly cases involve the end stages of the diseases, which is more common in Medicare patients. The National Institute of Health (NIH) estimates that the direct cost of treating COPD alone is US$18 billion a year. This makes it over 2.5 times more expensive to treat than all other diseases affecting hospitalised patients. One reasons for this high cost is the expense of the mechanical ventilators required to treat the latter stages of the disease. Not including critical care cost, the ventilator therapy alone expenditures start at US$325 per day. This makes the reduction of ventilator use a major focus of both healthcare providers and payers. Another potential market for the VRIXP™ system is the assessment and diagnosis of lung diseases. Asthma alone affects 5-10% of the US population. This equates to an estimated 14-15 million people in the US, including five million children. Asthma is also responsible for over 1.8 million emergency room visits and 500,000 hospitalisations annually. It is estimated that asthma alone costs the US economy over US$20 billion a year in both lost of productivity and treatment. 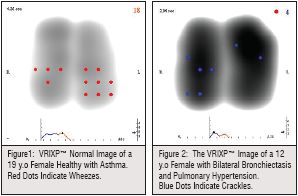 The system is designed to be portable and easy to use. This will allow it to be used in multiple settings by a nurse, technician or physician. As with an ECG, a physician will do the interpretation. The procedure takes approximately five to ten minutes including preparing the patient, placing the sensor array on the patient’s back, and reviewing the image. The actual recording takes approximately 12 seconds. Once the array is placed over the patient’s lungs, the transducers convert the sound data to an electrical signal. This is in turn digitised and converted into a dynamic image. This is a simple process that offers real-time images of lung function and can be done in virtually any setting without exposing the patient to radiation.

VRIXP™ images of lung pathology: Lung tumour image results in an asymmetrical appearance and reduced VR and disturbed dynamics in the tumour area. Pleural fluid results in reduced meniscus shape in the lower lobes and absence of VR in the area of the pleural fluid.

Patients having various lung pathologies such as asthma and bronchiectasis, differed from normal images in symmetry, intensity and time sequence. In asthma patients the VRIXP™ image showed an asymmetrical vibration response distribution between lungs and lung regions (Figure 1). In 5 bronchiectasis patients the VRI™ revealed disturbed VR which affected the time sequence and symmetry (Figure 2).

Following Single Lung Transplantation, most of the ventilation and perfusion shifts to the transplanted side. A routine ventilation and perfusion (V/Q) scan is performed periodically to asses the graft function. In a well functioning graft, following single lung transplantation, most of the ventilation (V) and perfusion (Q) shifts to the transplanted side (Figure 3a). Chest auscultation usually discloses a difference between the transplanted and non-transplanted lungs; however, no quantitative or regional assessment can be done by the physical examination. The VRIXP™ offers a quantification of regional assessment lung function or Quantitative Lung Data (QLD) function in post lung transplantation patients (Figure 4b and c). Vibration energy collected throughout the breathing cycle can be quantified for any lung region by integrating the vibration energy over the 40 sensors of the V-Array.

VRIXP™ provides a better understanding of lung function throughout the respiratory cycle, for improved diagnosis of lung condition. With the Quantitative Lung Data function of VRIXP™, the clinician can obtain immediately the regional assessment of right and left lung function, as the imaging modality quantifies the vibration distribution automatically during the procedure. The VRIXP™ also has the capability to visualise the location and distribution on the VRIXP™ image of the crackles and wheezes should it be recognised at any time throughout the respiratory cycle. The quick and efficient VRIXP™ procedure may be performed repeatedly for assessment and continued monitoring of lung status, providing instant results in any facility. 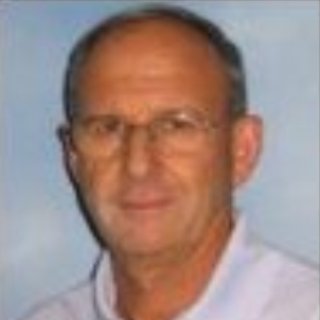