India requires a better emergency medical service to meet the growing number of emergencies. What exists currently in the form of fragmented services across the country falls way short of meeting the requirement.

It is terms like ‘The Golden Hour’ and the ‘Platinum Ten Minutes’ that typify the importance of Emergency Medical Services (EMS) all over the world. It is a well-accepted fact that a patient who receives basic care from trained professionals and is transported to the nearest healthcare facility within 15-20 minutes of an emergency has the greatest chance of survival. EMS is an essential part of the overall healthcare system as it saves lives by providing care immediately. It’s this recognition that has led to research and development in EMS. Over the years several advancements have been made and research is underway to create services that provide medical assistance to patients at the earliest. However, the state of EMS varies drastically from developed to developing countries like India. In spite of the development in the healthcare sector over the past decade, India is yet to create a single, comprehensive EMS that can be accessed throughout the country. 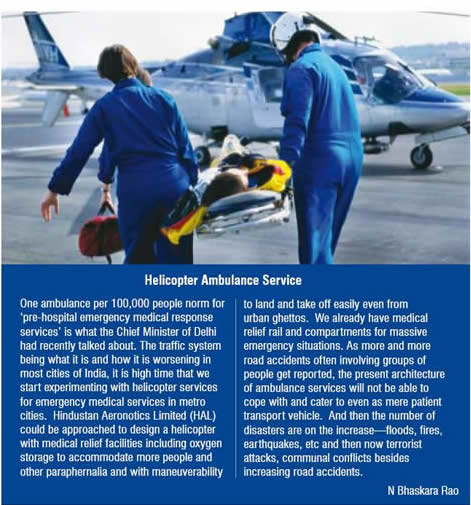 Emergencies typically occur in cases like road accidents, cardiac problems, convulsions and so on. Trained technicians or paramedics provide first aid to the patient i.e. pre-hospital care and shift the patient to an appropriate facility. EMS can be provided in two forms—treatment to in-patients and pre-hospital services. Pre-hospital medical services include ambulatory services, transportation of the patients to or from places of treatment and acute medical care (also called first aid). Ambulance services were largely unregulated prior to the 1970s. But over the last 2-3 decades, a largely regulated system has emerged around the world.

Earlier, emergency services were being provided only with the means of road transport through hammocks and automobile. In 1972, a modern emergency medical helicopter transport—air ambulance was introduced in the US. Later, more standards were formed to make services better. India also has a helicopter ambulance service available in the metros and is expanding it to the rural areas. 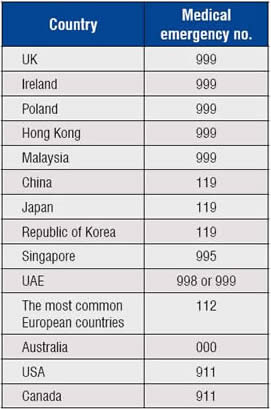 As compared to developed countries with proper emergency systems in place, there is no single system which could play amajor role in managing emergency medical services in India. There is a fragmented system in place to attend the emergencies in the country. 102 is the emergency telephone number for ambulance in parts of India. There aredifferent emergency numbers in India’s 28 states and seven Union Territories. Hospitals in the country provide different telephone numbers for ambulance services. Clearly, India is in need for proper emergency medical service that can be accessed from anywhere in the country. The existing fragmented system falls terribly short of meeting the demand.

Trauma continues to be one of the major causes of death in India. To avoid preventable deaths and disabilities, India has planned to have a common effective system that could provide emergency care with equity of access. In a bid to address this problem, The Centralised Accidents and Trauma Services (CATS) was set up by the Delhi Government in the early 1990s. This service was later expanded throughout the country. Unfortunately, it didn’t succeed despite having a toll free number (102) that was made available through various media.

More recently, NGOs and hospitals have come forward to provide their own EMSs. There have been considerable efforts by states across India to develop emergency services. Organisations like Emergency Management and Research Institute (EMRI) and American Association of Physicians of Indian Origin (AAPI)’s EMS are banned by corporates. EMRI is an exception in the otherwise struggling EMS system.

EMRI was founded in 2005. To begin with, its operations were limited to Hyderabad and Andhra Pradesh with a vision of responding to 30 million emergencies and saving 1 million lives a year. EMRI handles medical, police and fire emergencies through its 108 emergency service. Satyam is the technology partner of EMRI. EMRI has also entered into PPP with Indian Emergency Number Authority, National Emergency Number Association, American Association of Physicians of Indian Origin (AAPI), Shock Trauma Centre, Stanford University USA, Singapore Health Services, City of Austin in Texas, USA and Government of Andhra Pradesh.

EMRI also comprises a research institute, which does medical research, systems research and operations research. Through this, EMRI provides research papers for prevention and management of emergencies. EMRI’s other services includes free medical advice on phone on another toll free number 104 with access to more than 200 medical doctors and several more paramedics. It has entered into a partnership with Stanford Hospital, the School of Medicine for training 150 paramedics and 30 paramedic instructors over a two-year period in India. Though a positive, this is unlikely to meet the demand for paramedics in the country. “So far neither of these two services in Mumbai (AAPI) or Hyderabad (EMRI) have the kind of human resources and massive training programmes needed”, concurs Dr N Bhaskara Rao, Chairman, Centre for Media Studies, New Delhi.

In 2007, with the extension of Ambulance Access for All (AAA)’s services, American Association of Physicians of Indian Origin (AAPI) founded Emergency Medical Service (EMS) for Mumbai. AAPI has collaborated with the Confederation of Indian Industries (CII) and signed an MoU to endorse the growth of the healthcare sector in India, especially in rural areas. This agreement is to provide knowledge and technology transfer and provide EMSs to develop healthcare facilities in India.

Another such facility, Life Support Ambulance Service (LSAS) operating in Mumbai for three years in association with London Ambulance Service, UK, has now made inroads into Kerala and has 500 ambulances that can be reached on a toll free number 1298.

But these examples are far and few in a largely fragmented system. The lack of a common emergency number across the country is a major hurdle in creating a reliable emergency service. The fact that there isn’t clarity in the Ministry of Health about the importance of a common EMS does not help either. Says Dr Rao, “The Ministry does not have basic data on ambulances for emergency medical services in the country. This is despite the state-wise studies on ‘health infrastructure’ that were conducted recently.” Clearly, there is an urgent need to appraise the situation and implement corrective measures that can help put in place the required infrastructure as soon as possible.

In spite of the work going on in the area of EMS, the question still remains: is it meeting the requirements? The answer is no. Though there has been a considerable improvement in emergency services in India, but there is still a long way to go before a comprehensive EMS is implemented across the country. “Available emergency services are not sufficient to meet the demand as one ambulance is needed to cover a population of 50,000 to 100,000,” says Mr Venkat Changavalli, CEO, EMRI. Still numerous deficiencies exist in the emergency services across the country. “India should have far more accessible and reliable emergency medical services irrespective of geographical factors,” says Dr Rao.

Another important component missing in the current system, and one that will be needed in the long-run, is a body to regulate the EMS in the country. “LSAS in Mumbai claims that it had saved 22,000 lives in three years while EMRI in Hyderabad claims saving 55,000 lives in one year,” says Dr Rao, but there is no way to validate these claims and introduce corrective measures.

Awareness of the available services and preparedness are mandatory among the general public for the success of an EMS service. People also need to take initiative in knowing about the services being provided by available EMS. Indeed, an EMS that people are not aware of is as good as non-existent. One of the reasons for the success of EMRI is that 108 is widely recognised and has a great recall among citizens. “People’s participation is as important as blood donation and such cooperation is an important aspect of emergency medical relief service,” says Dr Rao. In 2006, American Academy for Emergency Medicine in India (AAEMI) made efforts to educate, impart knowledge and expertise to emergency care workers in Indian hospitals. It was aimed to increase the awareness and importance of Emergency Medicine. But this and other similar programmes are restricted to a few regions. Thus arose a need for an awareness creation programme across the nation that filled this gap.

The demand for legislation for EMS has been rising steadily in India. Supporters of such legislation opine that it would mandate a common access number, formation of an EMS council, trained paramedics, gradation of ambulance and hospitals, network of hospitals and define physical and human resources needed for the service. This could help save lives by making access easy for all the patients. Methods, technology, personal skills need to be standardised with formation of legislation in emergency services to provide protection for the providers.

Associations like Society of Emergency Medicine-India (SEMI) and American Association of Physicians of Indian Origin (AAPI) have submitted proposals for EMS legislation to the Central Government and State Government of Gujarat, Maharashtra and Andhra Pradesh. A word of caution comes from Dr Rao as he says “making emergency medical service legally compulsory without ground level preparedness will not be enough.” He adds that people need to be aware of their responsibilities towards fellow citizens—insist on and be aware of the best emergency service available.

The importance of a reliable EMS cannot be overemphasised, especially in India where the government has the responsibility of caring for a majority of the population. It can be argued that a nation of a billion people has been deprived of a decent EMS for too long now and it is high time the government takes definitive action. The success of a few services is evident enough of the need for EMS and what it will take to ensure that it works as expected. In a healthcare system that is sprouting and experiencing the benefits of involving private players, a public-private partnership framework could be the right way forward for policy-makers. At a time when the emphasis on preventing damage is greater than ever, the provision of pre-hospital care will be the key to ensure that lives are not lost due to avoidable circumstances. 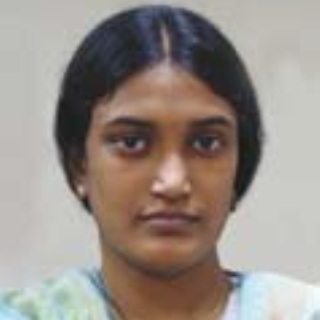