Are we really there?

Deployment of Smart Home Technologies (SHT) will in the coming decade, cause a paradigm shift particularly in delivery of geriatric rehabiliation. This article will critically review the practical utility of SHT from a clinician's perspective.. Translating technical computational theoretical conceptual success to meaningful clinical impact is another story. Understanding behaviour modification and culturally sensitive technology acceptance is often forgotten by top class enthusiastic passionate technologists and computer geeks . A thorough and systematic evaluation from the beneficiary’s perspective is required from a tech savy amicus curae, prior to integration in clinical care. Like other disruptive technologies in the past, the potential of SHT for causing a great impact should not be underestimated

Deployment of Smart Home Technologies (SHT) for remote healthcare is already causing a paradigm shift. However, achieving technical success is not the same as demonstrating a clinical difference in healthcare outcomes. Technology acceptance from the beneficiary’s perspective is essential. SHT connotes excitement often accompanied with hype and unbelievable expectations. Like other disruptive technologies, the potential of SHT to cause a great impact should not be underestimated. Evidence-based, thorough, and systematic evaluation is required. 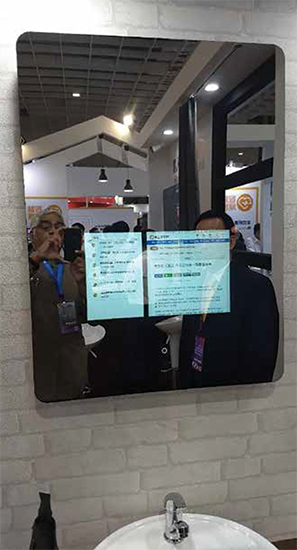 Though India-centric, this introduction could be extrapolated to many other countries. The traditional joint family ecosystem prevalent in India for centuries is slowly disintegrating, exposing the vulnerability of elders. The author and his family were looking after their parents even when the latter were 84 and 94 years of age. Four generations living under one roof, in the authors’ opinion, was a win-win situation for everyone. There was an excellent quality of life for all. No one felt the absence of smart homes and even the necessity for ‘rehabilitation’. However, the world today is totally different. A report by the Confederation of Indian Industries (CII) suggested that India’s elderly population will grow to 158 million by 2025. By the end of the century, seniors would constitute 34 per cent of the total population. With investment from private sector entities, the senior care segment could emerge as a sunrise industry. India has around 100 million elderly at present. This may increase to 323 million by 2050, constituting 20 per cent of the population.. As of 2017, 92.4 per cent of the elderly in India was physically mobile, implying that they could manage most of their day-to-day responsibilities. only 5.5 per cent were confined to their homes. Money is not the only concern for India’s elderly. A survey by HelpAge India estimates that 6 per cent of senior citizens in India live alone. Loneliness is a problem that cuts across classes and is a challenge in cities as well. 10-20 per cent of senior citizens in India are probably suffering from loneliness, a condition likely to be exacerbated by the current curbs on movement and contact due to the pandemic

Assistive robots have been used to power wheelchairs, prosthetic limb controls and home automation systems. Technology readiness for smart homes and home health-monitoring technologies is evolving. Placement in a care facility, especially against an individual’s wishes, has been associated with depression, social isolation and greater dependency in completion of self-care tasks. Older adults (almost 85 per cent) prefer to obtain care in their homes rather than a healthcare institution. Elderly, handicapped patients and those with locomotion difficulties particularly when living alone can benefit from smart homes. Costs for elderly care in smart homes range from US$ 900 to over US$ 5,000 per month. With increasing use costs will come down. Initial studies indicate that staying at home-or ageing in place, as it is called—results in better health outcomes than moving to a care facility, especially when cognition and depression is the problem.

The technology acceptance model (TAM) is an information systems theory that models how users accept and use a technology. The actual system use is the end-point where people use the technology. Behavioural intention is a factor that leads people to use the technology. This is influenced by attitude, which is the general impression of the technology. When users are presented with a new technology, several factors influence their decision about how and when, they will use it. These include Perceived Usefulness (PU) or “the degree to which a person believes that using a particular aid would enhance his/her efficiency”. Perceived ease-of-use (PEOU) is "the degree to which a person believes that using a particular system would be free from effort”. If the technology is easy to use, then it gets widely accepted. Perceptions are individualistic, depending on age, gender, circumstances, and time to device use. People over 65 generally use fewer new technologies—including the Internet, smartphones, and other digital devices—and use them less frequently than younger people. Older, less educated, and less affluent people, as well as people with disabilities, appear to use them even less often. 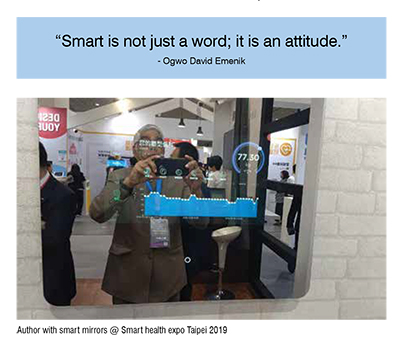 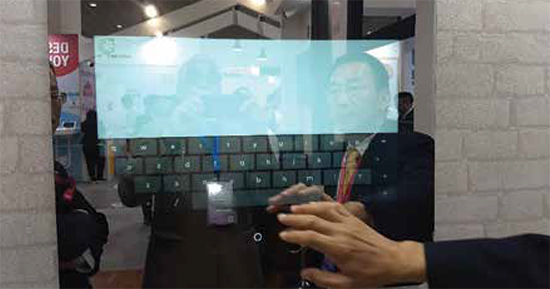 A smart home is a convenient home setup where appliances and devices can be automatically controlled remotely with an internet connection, using a smart phone or other networked device. Smart home technology for the elderly needs to specifically cover safety, health, physical activity, social engagement and  leisure. Smart locks, smart lighting, apps and gadgets for entertainment and communication, motion sensors and alerts, audioenabled devices, medication reminders and other technology-enabled wellness tools form a smart home. Smart locks can be programmed to grant access only to authorised personnel. Door cameras and smart locks can be customised to allow individuals with mild impairments to be independent for longer periods.  Smart homes increase domestic comfort, convenience, security and leisure, reducing energy use through optimised home energy management. Cost-effective automation, physical and psychological support promote independence. Acceptance is a key issue. Numerous initiatives worldwide have been developed to explore the use of motion sensors, radio frequency sensors, video cameras, wearable devices and other applications that target older adults. Majority of identified projects include technologies for functional monitoring (such as bed sensors, activity/motion sensors, and gait monitors).

A robot is an autonomous machine capable of sensing its environment, carrying out computations to make decisions and performing actions in the real world. Many are complicated, from an engineering and a usability point of view. If unpredicted conditions occur the robot cannot adapt as most cannot think for themselves. Telepresence robots are used to consult with patients and for patients to connect with remote family members. Robot pets have the potential to address loneliness and improve cognition in the elderly. A cuddly seal, one of the first therapeutic interactive pets, originally selling for about US 5,000, is intended for use in elder-care facilities.

Humanoid and pet robots, such as NAO and PARO, produce improvements in cognition. Exploding elderly populations of affluent countries is resulting in increasing numbers of agerelated cognitive decline. Deep Learning and related technologies are positively impacting robot cognitive training for those experiencing age-related cognitive decline. Human robot interaction with highly patient-centred cognitive training will play an important role. Robots are increasingly being used in neuro-rehabilitation. These devices can assist in practicing upper or lower limb movements and motor relearning, and in developing proprioception, cognitive functions and attention. The emphasis is on high repetition, interactive and personalised therapy. Most of the devices make it possible to exercise in a virtual environment. It is easier to introduce virtual reality than practicing in a real environment. AI in robots should give further options. Robots are not simply supplementary therapists reducing human efforts when executing dull and exhausting exercises

Sexbots are a delicate subject to discuss. There are many moral and ethical concerns regarding these machines, especially as robots become smarter. Nevertheless, within the rehabilitation patient population, there are many people who have limited abilities and limited opportunities to fulfil their sexual needs. For this group, sexbots have potential to significantly improve quality of life and overall happiness. In the past few years, sexbots have become more sophisticated. Roxxxy was introduced in 2010 for approximately US$5,000 and featured a variety of options. Harmony became available in 2017 for approximately US$12,000 and has some limited conversational abilities.

Smart toilets are likely to play an increasingly important role in smart homes. Sugar levels in urine, body weight, temperature and hormone levels are detected and data transmitted automatically to computers and doctors. Changes in urine flow could indicate a prostate or bladder problem. A toilet seat developed by Rochester Institute of Technology had sensors to measure blood oxygenation levels, heart rate, and blood pressure Automated analysis of human feces could be beneficial detecting markers of various diseases. The toilet also can measure number of white blood cells and types of protein in urine.

Mirrors are an integral part of our daily life. The ability to display information makes a mirror “smart”. Smart mirror technology is now being used to predict and to monitor aspects of health and disease. A combination of intelligent hardware and software could identify subtle, yet clinically relevant changes in physique and appearance. A smart mirror could record and evaluate body position and motion to identify posture and movement issues, and offer feedback for corrective actions. These devices embed multimodal sensors — multiple cameras, motion detection, lasers, microphones, speakers — as well as software based on artificial intelligence (AI). This ensures communication with multiple sources of data, linking them to other smart products and the cloud. This enables non-invasive unobtrusive physiological measurements, creating interactive capabilities based on tracking and recognising gestures. Cameras embedded in the bathroom mirror or elsewhere in the home could help to more passively predict health issues before they manifest

Smart Homes and Geriatric Rehabilitation: A peep into the future

Smart cities have a proliferation of different types of sensors spread across with high bandwidth communication infrastructures, providing unlimited network connectivity. Smart cities infrastructure is being leveraged to provide a smart healthcare system. In the future Smart Homes will talk to the smart city's infrastructure to provide contextualised health related recommendations and suggestions. This will involve use of computer vision, natural language processing, speech recognition, network planning, machine learning and data science. Smart Homes presuppose interoperability among the world’s leading vendors. Amazon, Apple, and Google have agreed to create an opensource standard for internet-connected home products, such as smart speakers. They will work with Zigbee Alliance, an association of companies working on open IoT standards, plus Samsung, Ikea, and other major players in the sector. The companies have set up a working group, called project “Connected Home over IP" (or CHIP), which will meet, discuss, and hopefully agree on a set of standards. If adopted by all the major players, this standard could kick start adoption of smart home technology. An open ecosystem, better security standards, and the rollout of 5G could be a winning combination to push smart homes into the mainstream . Maintaining mobility is fundamental to independent living and quality of life of older people. Assisted technology in geriatric care and rehabilitation will include use of robots and telehealth. The “new aged” will have more purchasing power and higher levels of familiarity with technology. Expectations will be higher. Being more fit, active, mobile, safe, connected, independent and self-reliant with an excellent quality of life will be the new mantra. Avoiding ‘getting old’ would even be regarded as an option. Geography independent, access to cost effective mobile broadband services will be deemed a constitutional right. A rapidly emerging ‘smart homes’ movement could occur worldwide. Establishing the validity, efficacy, practicality and cost of smart homes technologies and proof that it does indeed make a difference will be required

Popularity of smart homes hinges on understanding who will use it and how it will help them. Technology should be viewed as a tool to achieve an end not an end by itself. As a septuagenarian belonging to the BC (Before Computers not Before Covid-19!) era the author though a technology buff is able to  understand the necessity for getting into the minds of the end user. “Customer delight” is not just a cliché used as marketing ploy. The solution should not go in search of a problem, we need to develop tools to address specific problems never forgetting that the world has turned upside down and that the present day octogenarians have come from another planet! 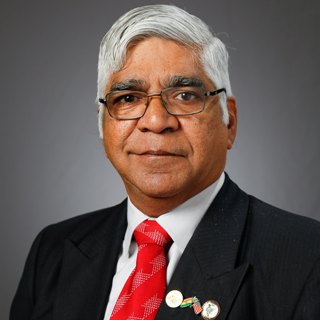