We caught up with Professor Sylvia Haas, the grand doyenne of Novel Oral Anticoagulants (NOACs), after one of her presentations at the APSC 2018 Congress in Taipei. Prof Haas has been involved in the research and development of direct factor Xa inhibitor NOACs for more than 25 years. In that time she has been a co-developer of several NOACs including rivaraxoban (marketed as Xarelto) the most widely used NOAC today.

We caught up with Professor Sylvia Haas, the grand doyenne of Novel Oral Anticoagulants (NOACs), after one of her presentations at the APSC 2018 Congress in Taipei. Prof Haas has been involved in the research and development of direct factor Xa inhibitor NOACs for more than 25 years. In that time she has been a co-developer of several NOACs including rivaraxoban (marketed as Xarelto) the most widely used NOAC today.

During her presentation Prof Haas pointed out that although the use of NOACs for stroke prevention has increased in Asia it still lags behind that of Europe and the United States, potentially putting millions of patients at greater risk of stroke than they need be. She also noted that doctors in Asia have a tendency to prescribe lower doses of NOACs than those stipulated in seminal guidelines such as the European Society of Cardiology (ESC) 2016 Guidelines for the management of atrial fibrillation and the 2017 consensus of the Asia Pacific Heart Rhythm Society (APHRS) on stroke prevention in atrial fibrillation.

We took the opportunity to ask her what doctors should take into consideration when prescribing NOACs.

What are the key considerations when choosing a NOAC for AF patients in stroke prevention?

Prof. Haas: When choosing a NOAC for AF stoke prevention it is crucial to consider the pivotal phase three trials and to understand how they were developed and then to compare those with feedback from phase four studies of registry analysis. The main focus in this regard should be on the prospective studies. Of course we also have retrospective data analysis which can also be used to inform our decision-making but my main concern with retrospective studies is that we often don’t have all the relevant information. For instance we know what dose was proscribed but we don’t know how the medication was taken. Was it a once per day dose or a twice per day dose, and what was compliance like across 500 patients? We know from experience that compliance rates, adherence and persistence, are much higher with once per day dosing so if this information is missing from a retrospective study it could affect the accuracy of the results. That’s why I prefer to base my decisions on prospective real world data.

Next of course we must consider the individual patient’s characteristics, and particularly kidney function; measuring kidney function is very important. If there is impaired kidney function it makes the decision quite clear that we should not use a drug that is mainly eliminated via the kidneys and should instead go for one of the Xa inhibitors which are much more benign for renally-compromised patients. Now among the Xa inhibitor NOACs we have different dosing recommendations but I am very convinced that the evidence for one Xa inhibitor, in this case rivaroxaban, is addressed in the pivotal trial, the ROCKET AF study, where all patients with a creatinine clearance below 50 (CrCl15–49 mL/minute) were assigned to a lower 15mg dose (1) and this was followed up by the J-ROCKET AF study (2). The evidence from these trials makes it very clear to me how to treat a patient and also demonstrates the importance of prospective studies for informing our treatment decisions.

Would you also take into account body age, weight, and frailty as well as creatinine clearance; might those also be reasons to consider a lower dosage?

Prof Haas: That’s an excellent question. That is something that is intuitively done by many doctors. But I would go back to the pivotal trials and the sub group analysis like those from ROCKET AF pointing to the fact that elderly patients have higher risk of both stroke and bleeding but the standard 20mg dose of rivaroxaban performed very well in both groups, so age would not be a major factor in my choice of dose.

We don’t have a specific sub group analysis for low body weight but low body weight often associated with reduced kidney function, particularly in females so some doctors intuitively prescribe lower doses for tiny ladies however I would always recommend testing renal function and then if we see it is impaired we know we have a clear indication from the ROCKET studies for the reduced dose. However, what we see from subsequent phase four studies is far too many patients are missing creatinine clearance values and this indicates that doctors are making dosing decision intuitively but we should discourage this and encourage doctors to primarily stay with the labelling. This is because we also saw that the patients that received the lower doses also had more concomitant comorbidities and may even have higher bleeding risks. Also in the real world XANTUS study, it was seen that the patients receiving 15mg rivaroxaban had higher incidence of bleeding because they had more concomitant medication and more comorbidities. So I think we have clear guidance that measuring kidney function should be the number one reason for considering a lower dosage NOAC before considering other patientrelated factors because the bottom line taken from the many patients included in phase four studies is that for patients with creatinine clearance above 50 we do not expect to see higher bleeding rates with the 20mg dose.

Is there any evidence that higher doses of NOACs significantly increase the risk of bleeding?

Prof Haas: From what we have seen bleeding risk is not exclusively correlated with the dose of any anticoagulant. Rather it is the patient who is driving the bleeding risk more than the dose of an anticoagulant. We have not seen a distinct difference between the higher and lower doses, it is the CHADS2, CHADSVAC scores that primarily drive the bleeding risk. Other factors to consider are the manageable risk factors such as hypertension and other comorbidities, concomitant medications, and alcohol consumption.

Are some NOACs safer than others for patients with renal impairment?

Prof Haas: We should separate the IIa inhibitors that target the enzyme thrombin from the Xa inhibitors which act directly upon Factor X in the coagulation cascade because the IIa direct thrombin inhibitors (DTIs) like dabigatran are mainly excreted via the kidneys up to 80 per cent of circulating dabigatran is excreted, unchanged, by the kidneys. Therefore, any reduction in renal function can affect the plasma concentration of the medicine.

However, within the Xa inhibitors we only have one, rivaroxaban 15mg, which has a clear recommendation based on renal function and on which we have clear data; so I would stick with that. 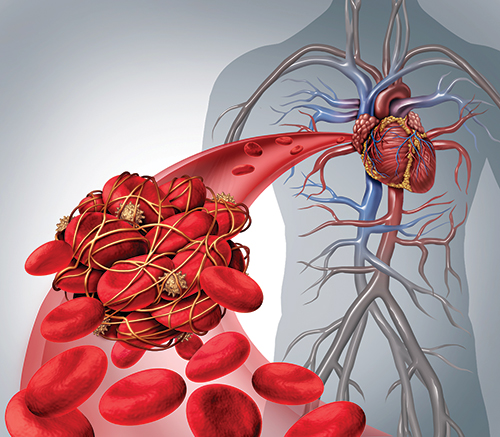 What are your experiences with rivaroxaban in terms of its effectiveness in stroke prevention and bleeding rates in low risk and high risk patients?

Prof Haas: We have so much real world information now supporting the safety and efficacy of rivaroxaban for both high and low risk patients. What we have seen in the studies is that it is the patient characteristics driving the risk, and not just for stroke but also for bleeding. There is a sub group analysis from the XANTUS study which is not fully published yet but was presented as a poster at last year’s ESC (European Society of cardiology) Congress in Barcelona which brought the patient characteristics from ROCKET AF and XANTUS together. ROCKET is a high risk patient population, they needed to have a CHADS2 score of at least 2 but the mean score for the study was 3.5 while for XANTUS there was a mean CHADS2 score of 2 but it also included some patients with higher CHADS2 scores. Using an accepted, validated statistical method we brought the high risk patients from XANTUS together with the ROCKET patients and matched the patient populations and found that the bleeding and stroke rates for both studies were similar. That tells us that it is the patient characteristics driving the risk. From these two studies we also have excellent experience and evidence for rivaroxaban for both higher and lower risk patients.

For high risk AF patients with renal impairment, what are your challenges in prescribing NOACs to prevent stroke in these patients?

Prof Haas: For me renal impairment is not a challenge for a NOAC, it’s an opportunity. Because compared to Warfarin which is not suitable for renally-impaired patients we now have the opportunity with Xa inhibitors to offer much better treatment. The evidence is clear for prescribing the lower 15mg dose rivaroxaban for stroke prevention in renally impaired NVAF patients.

Prof Haas: Yes that is something very important that came out of the sub group analysis of patients from XANTUS with modifiable risk factors. I think the number one consideration when seeing a new patient is not just to think of them as a NVAF patient but also to take into consideration any other comorbidities and in particular any concomitant medications to discover what other cofactors they might have associated with bleeding risk. For example uncontrolled hypertension, high alcohol consumption and the intake of other medications. Check if any drugs such as NSAIDs (non-steroidal antiinflammatory drugs) have been prescribed by other doctors, for arthritis for instance. Also aspirin; many NVAF patients will previously have been on aspirin and we see many patients still on it who don’t need it anymore. We have also discovered that the over-the-counter drug acetaminophen (Paracetamol) increase the bleeding risk to the same degree as NSAIDs. Fortunately acetaminophen is usually only taken sporadically for the occasional headache or whatever, unlike NSAIDs which are often taken chronically. Here in Asia there is of course also Traditional Chinese Medicine (TCM) to consider, and that is largely a black box to western medicine when it comes to interactions. So it is important to question the patient about what else they might be taking, to see if perhaps some medications can be withdrawn, and to council them on reducing manageable risks such as alcohol consumption and hypertension. That way we might be able to reduce the risk and possible even consider reducing the dose.

Sylvia Haas is an emeritus professor of medicine and former director of the Haemostasis and Thrombosis Research Group at the Institute for Experimental Oncology and Therapy Research, Technical University of Munich, a position she held for almost 30 years. An authority on the development of new antithrombotic therapies, biomarkers, and tumour-associated thrombosis, she is a respected researcher and also in charge of various integrated teaching programmes.