Obesity is a complex disorder and a major health risk factor linked to cardiovascular disease, stroke, cancer, hypertension, diabetes, and mortality. Polycystic ovary syndrome (PCOS) is an endocrinemetabolic disorder characterised by multiple hormonal imbalances, reflecting on a clinical presentation dominated by manifestations of hyperandrogenism, which generate short and long term consequences on female health. The obesity is a contributing factor in the development of PCOS. Lifestyle intervention is a non invasive form of therapy which is totally patient oriented and tailored to their abilities. Bariatric surgery has been an effective treatment for morbid obesity and with improvement of the metabolic syndrome. Bariatric surgery should be considered along with other medical and lifestyle alterations as first line therapy in PCOS women with obesity and metabolic abnormalities..

Obesity is a complex disorder and a major health risk factor linked to cardiovascular disease, stroke, cancer, hypertension, diabetes, and mortality. Large scale developmental activities and urbanisation in India have brought significant changes in lifestyle and dietary habits in the growing population. According to a World Health Organization (WHO) survey, worldwide obesity has doubled since 1980. Studies reveal obesity is killing three times as many as malnutrition. Obesity is a global burden on society which has a potential to destroy Nations medically and economically.

Disease has been defined in many numerous ways. The American Medical Association (AMA) House of Delegates 2013 have defined obesity as a disease considering the following criteria: an impairment of the normal functioning of some aspect of the body, characteristic signs or symptoms, and harm or morbidity.

Obesity is caused by an imbalance between energy intake and energy expenditure which leads to increased body fat. However, it does not account for the complex role between the Central Nervous System (CNS) and metabolically active organ systems. There is a derangement of appetite modulation with ghrelin, leptin, insulin, and peptide YY may in the obese state causing it difficult to achieve sustained weight loss.

The first description of linkage of Polycystic Ovary Syndrome (PCOS) and obesity was given in 1930. PCOS is an endocrine-metabolic disorder characterised by multiple hormonal imbalances, reflecting on a clinical presentation dominated by manifestations of hyperandrogenism, which generate short and long term consequences on female health. PCOS being a complex disorder, infertility is the most morbid complication affecting approximately 48.5 million women aged 20–44 years, with PCOS accounting for 6–15 per cent of these cases, although up to 70 per cent of women with PCOS may be undiagnosed.

The women afflicted by PCOS have a greater tendency to develop obesity, dyslipidemia, hypertension, metabolic syndrome, type 2 Diabetes Mellitus (DM2) compared to women without PCOS. Obesity worsens the condition of PCOS both reproductively and metabolically. The obesity should be addressed primarily in patients suffering from PCOS to avoid the sequelae of infertility, pregnancy complications, metabolic dysfunction.

Insulin resistance is a major feature of PCOS and is particularly prevalent in those women who are obese with 70–80 per cent demonstrating insulin resistance and compensatory hyperinsulinemia.

The Influence of Obesity on Metabolic Abnormalities in PCOS

Obesity is a contributing factor in the development of PCOS. Body Mass Index (BMI) levels correlate with both body fat and concurrent health risks. Pre-diabetes, dyslipidemia, and metabolic syndrome are the metabolic abnormalities associated with PCOS in adult women. Women with PCOS tend to have more than two to four times metabolic disturbances compared to those without PCOS. Obesity poses increased risk of developing impaired glucose tolerance in overweight, obese woman with PCOS compared to a normal weighing woman with PCOS. The incidence of dyslipidemia and metabolic syndrome also increases with increasing obesity. There are numerous studies like multicentre trial of women with PCOS found no metabolic abnormalities in women with PCOS and BMI <27.

Symptoms of PCOS with Obesity

The following fig.1.1 describes the symptoms of PCOS with obesity.

The Pathophysiology PCOS in Association with Obesity

The association of insulin resistance, hyperinsulinemia in association with obesity and PCOS is described in the following flow chart diagram (figure 1.2).

The Influence of Obesity on Reproductive Abnormalities in PCOS

The diagnostic criteria for PCOS were revised at an International Expert Conference in Rotterdam in 2003. According to the Rotterdam criteria, diagnosis of PCOS requires at least two of the three following features:

A major concern for women with PCOS is decreased fertility, which is aggravated by obesity and metabolic aberrations. 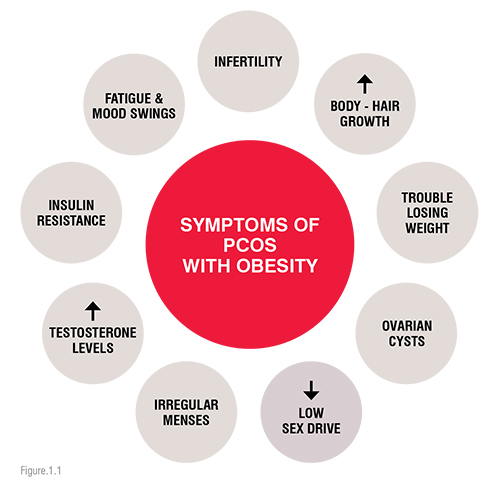 Menstrual irregularities and an ovulation are more prevalent in obese women with PCOS than in non-obese women. Studies have suggested improvement in their reproductive cycle with achievement of 5 per cent weight loss. Obese women with PCOS have difficulty for conception. In PCOS, normal physiology of folliculogenesis is disrupted in the ovarian cycle under the influence of increased androgen activity causing hyperandrogenemia.

Treatment of Obesity in PCOS Lifestyle therapy in PCOS

Lifestyle therapy in PCOS is a daunting task. Lifestyle intervention is a non invasive form of therapy which is totally patient oriented and tailored to their abilities. Lifestyle changes include exercise regime and daily calorie restriction diet plan to improve PCOS. Although there are limited studies and are not consistent with results of improvement in PCOS with dietary modification. Medical Nutrition Therapy (MNT) helps women with PCOS for adopting the lifestyle changes to prevent complications. MNT is based on an assessment of lifestyle changes that would help a patient with PCOS achieve and maintain clinical goals. The Academy of Nutrition and Dietetics’ evidencebased nutrition practice guidelines recommend the following structure for the implementation of MNT for adults with PCOS:

The diet therapy approach is beneficial for these patients suffering from PCOS for improving insulin resistance, metabolic and reproductive functions. Effects of insulin-sensitising agents in PCOS

Insulin sensitising is known to improve the symptoms of PCOS. The anti-diabetic drugs have been useful to treat the PCOS women with insulin resistance. The first study of metformin in women with PCOS was published in 1994; several studies have demonstrated a positive effect of metformin on both reproductive and metabolic aspects of PCOS.

Thiazolidinediones (TZDs) accelerate the differentiation of adipose cells and improve insulin resistance. By improving insulin resistance and indirectly reducing androgen synthesis in the ovaries, also affects the reproductive system. The ovaries can also be directly targeted with TZDs to reduce hyperandrogenemia and to stimulate ovulation. Pioglitazone is a new TZD derivative which acts after insulin binding by insulin receptors to improve the action of insulin, reduces its resistance to hormones, and inhibits glucose production in the liver. Pioglitazone has been used to treat the insulin resistance, hyperandrogenism, and ovulatory dysfunction that are characteristic of PCOS.

Effect of antiobesity drugs in PCOS

There are currently very few studies which prove the efficacy of anorexiant agents in management of PCOS. There is one FDA-approved drug for the treatment of obesity: orlistat. Orlistat works through a d by inhibiting intestinal lipase activity and thus inhibiting fat absorption. Adverse effects include steatorrhea and flatulence that are reduced with adherence to a low-fat diet and, in rare cases, hepatic damage. Nevertheless, orlistat is available in prescription strength (120 mg/meal). A study on 101 PCOS women showed orlistat combined with lifestyle changes induces substantial weight loss in PCOS. However, emphasis on lifestyle changes when combined with antiobesity agents, exert beneficial effects on the endocrine abnormalities of obese patients with PCOS and improve metabolic parameters. The emphasis should be laid on lifestyle modification before initiation of pharmacological intervention. 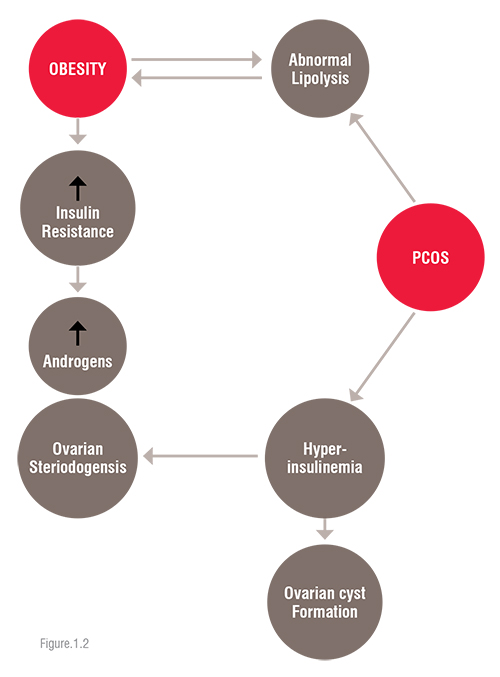 Bariatric surgery has been an effective treatment for morbid obesity and with improvement of the metabolic syndrome. With modernisation globally and the current understanding of the metabolic changes occurring in bariatric patients postoperatively, bariatric surgery has emerged as successful modality of treatment for morbidly obese women with infertility secondary to PCOS. Epidemiological studies have suggested that weight loss post bariatric surgery may increase women's chance of conception with decrease incidence of PCOS after surgery, there are very few studies assessing fertility before and after bariatric operations. At present, there is no consensus on the role of such surgery in the management of infertility and whether surgery can also be beneficial in women who have a BMI of under 40 kg/m2.

There are very few studies conducted on PCOS patients. PCOS (n=17) patients with an average age of 30 years were followed prospectively for up to 26 months after bariatric surgery (biliopancreatic diversion or LAGB). Outcomes of this study were in favour of surgical intervention in PCOS. Twelve women regained normal menstrual function and most 10 had documented spontaneous ovulation. Average weight loss was 41KG. Patients showed significant improvement in hirsutism, androgen profiles. Bariatric surgery in reproductive age women has been shown to decrease menstrual irregularities.

PCOS is a challenge in the medical fraternity since many obese PCOS women are adolescents. The prevalence of diabetes mellitus before the age of 50 is exceptionally high and estimated at 3-4 times the general population prevalence.

A holistic approach to weight loss in adolescents is very important. Almost 20 per cent of adolescents are overweight by the age of 19 years. It is very important for young women to initiate lifestyle changes through diet and exercise to prevent PCOS. Many PCOS women with obesity may develop coronary artery disease and glucose abnormalities at a very young age. Although women tend to seek medical care for menstrual irregularities and hirsutism, this is an opportunity for testing, education and risk prevention of metabolic abnormalities. Bariatric surgery is a powerful tool that should not be overlooked simply because a woman is young or presents with PCOS and metabolic abnormalities. Bariatric surgery has both short and long term risks, the potential benefits may be greater in these PCOS women than in older women who are already more advanced with respect to vascular disease. 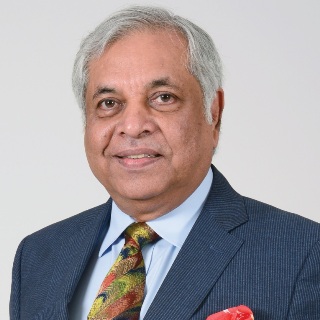