A large series of randomised controlled trials conducted all around the world have confirmed clearly the advantages of endoscopic inguinal hernia repair compared to the open technique in terms of operative complication, discomfort, analgesic use and return to work.

The initial enthusiasm for endoscopic herniorrhaphy was driven by dissatisfaction with the pain, disability and recurrence following traditional anterior hernia repairs. The first endoscopic approach to the problem of groin hernia is credited to Ger who intraabdominally stapled the neck of a hernial sac in 1982. Schwartz in 1990 described a plug repair. Arregui had described the transperitoneal repair whereas Mckernan and Phillips developed the totally extraperitoneal repair. The intraperitoneal onlay mesh repair was developed by Franklin and Rosenthal.1

Over the past decade, endoscopic hernia repair has changed from an operation in evolution to several well-defined techniques of transperitoneal or totally extraperitoneal approaches. Almost all endoscopic repairs are now based on the principle of Stoppa’s repair. All accomplish a posterior reinforcement of the myopectineal orifice of Fruchaud with prosthetic material thus taking care of existing and potential hernial sites (direct, indirect and femoral).2 Effectiveness of this type of repair has been well-established by the open operation of Nyhus and Stoppa. The endoscopic approach mimics this and can be considered as a new method of performing an old established open operation.

The anatomy of the inguinal region is one of the most difficult to master and it needs to be relearned before embarking on endoscopic repair as the approach to the hernia is from inside out, which is just the opposite of what one learns in the anatomy class, i.e. outside in. Hence, an overview.
The inguinal region is a bridge between the abdomen and the thigh, allowing necessary structures to traverse from one anatomical region to the other while maintaining the sanctity of each region. Transmission of these structures creates potentially weak spots in the otherwise uninterrupted three-layered abdominal wall resulting in inguinal and femoral hernias.

Endoscopic TEP hernia repair is performed in the preperitoneal space of Nyhus, which is a potential space created between the fascia transversalis above and the peritoneum below. The lateral extent is from one Anterior Superior Iliac Spine (ASIS) to the other. This also includes the retropubic space of Retzius and Bogros. The region, which marks the inguinal and femoral hernias, lies within a quadrangle known as myopectineal orifice of Fruchaud (Figure 1) which is bound medially by lateral border of rectus abdominis, laterally by iliopsoas, superiorly by conjoint tendon and inferiorly by the pectin pubis. The lateral limit of the visible pubic bone marks the site of Cooper ligament (pectineal ligament), which extends along the superior pubic ramus lateral to the pubic tubercle. The iliopubic tract (analogue to the inguinal ligament) extends from the Cooper ligament to the ASIS dividing the myopectineal orifice into superior and inferior compartments. The superior compartment has the inferior epigastric artery which divides the inguinal hernias into direct (medial) and Indirect (lateral). Below the iliopubic tract lie the external iliac vessels. The medial most compartment of the femoral sheath houses the femoral canal which is a potential space occupied by a femoral hernia.

Endoscopic repair requires exposure of the entire myopectineal orifice, from the midline to the ASIS, so as to cover all the potential sites of hernias with a single large mesh. 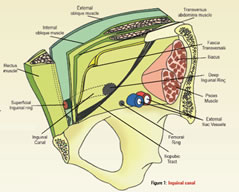 Endoscopic hernia repair is the procedure of choice in patients with bilateral and recurrent hernias.
Anterior repair of a recurrent hernia is a technically demanding operation and is associated with a much higher risk of regional nerve injury and testicular ischemia. Endoscopic herniorrhaphy provides a posterior approach so that the previously dissected tissue is avoided, thereby reducing the chance of regional nerve injury and vascular compromise of the testis.2 Bilateral inguinal hernias are an ideal indication for endoscopic repairs. The ability to avoid bilateral inguinal incisions, dissection and postoperative disability is a significant advantage that should not be minimised.2 Laparoscopic hernia repair is performed for primary unilateral hernia as well.

Figure 2: OT layout for TEP Here we undertake to describe the technique of TEP in brief followed at our institute. The patient is positioned in supine position with the surgeon and the assistant standing as shown in (Figure.2). Repair can be done in either regional or general anaesthesia. Extraperitoneal access is achieved through an infraumbilical 12 mm transverse incision. After incising the rectus sheath, a space is created between the rectus muscle and posterior rectus sheath. We use our indigenous balloon prepared using two fingerstalls of a size 7.5 latex surgical glove for preperitoneal dissection. A 10 mm Hasson cannula is introduced in the preperitoneal tunnel. Two working ports are placed in the preperitoneal space in the midline (Figure 3,4). Dissection of the extraperitoneal space begins in the midline. The aim is to identify the pubic bone. Dissection then proceeds inferiorly and laterally and the Cooper’s ligament is identified. The direct hernial sac is visible immediately and is reduced by traction on the peritoneal extrusion and counter traction on the abdominal wall. The anatomical landmarks that would now become visible are Cooper’s ligament, iliopubic tract, femoral ring and the inferior epigastric vessels.

An indirect hernial sac is identified as a white glistening structure lying anterolateral to the cord. An incomplete sac is dissected off the cord and completely reduced. No attempt should be made to reduce a complete sac as excessive traction causes severe postoperative testicular oedema and pain. Such a sac should be separated from the cord, transected and ligated using a catgut endoloop. Complete reduction of the peritoneal extrusion is ensured by stripping the peritoneum over the cord till it is no more visible proximally. Adequate space has to be created lateral to the cord structures as the lateral extent of the mesh would lie in this space. The inferior extent of dissection in this space is the psoas muscle.

The minimum size of the polypropylene mesh to be used on either side should not be less than 15 x 12 cm. The mesh is laid from the midline and extended over the cord structures till the lateral abdominal wall. The free margin of the mesh is pushed into the retropubic space medially and lies over the psoas muscle laterally. The mesh is then fixed at two places – the pubic bone and Cooper ligament using a 5mm fixation device, Protack TM (Autosuture). No fixation should be done laterally for fear of cutaneous nerve entrapment. The mesh is then unrolled to lie within the extraperitoneal space and CO2 is exsufflated ensuring that none of the edges of the mesh is partially rolled as this may lead to further rolling and the likelihood of future recurrence.

The relative contraindications based on the experience of the surgeons are obstructed hernia, complete irreducible hernia, patients who are obese and those with a history of previous lower abdominal surgery.

The TAPP method is simpler to learn and therefore more frequently performed. However, we do not agree in principle to a transabdominal approach routinely for groin hernia repair as it necessitates violation of the peritoneal cavity. For over a decade we have been following the TEP technique for repair of groin hernias and a TAPP repair is performed only in patients who have had extensive lower abdominal surgery. In a study by Sergio Roll et al from Brazil comparing TAPP and TEP, it was observed that TEP repair was associated with the lowest risk of intraoperative and postoperative complication related to the male genitalia. Similarly, a study by Felix et al. has shown that TEP has fewer complications and equivalent if not superior recurrence rates.4

The TEP repairs began at a time when Lichtenstein repair had become the standard of care with reported recurrence rates of less than 1%. The advantages of laparoscopic repair over open repair are:
1) Reduced postoperative incisional pain and disability
2) The greater availability of space by the extraperitoneal approach facilitates the insertion of a much bigger mesh as compared to a smaller mesh when performing an open repair
3) In recurrent hernia, the dissection proceeds through a virgin area which was not previously operated upon thus reducing the chances of nerve injury and vascular injury
4) The entire myopectineal orifice can be inspected bilaterally and repaired. The reported incidence of a contra lateral hernia in a patient presenting clinically with a unilateral hernia is up to 50%.5 TEP approach presents a major advantage in this regard as both sides can be repaired with the same approach

A large series of randomised controlled trials conducted all around the world have confirmed clearly the advantages of endoscopic inguinal hernia repair compared to the open technique in terms of operative complication, discomfort, analgesic use and return to work. In a study by Liem et al, using a validated quality of life measurement instrument, the endoscopic patient group was found to have a significantly improved quality of life at 1 and 6 weeks after surgery.6

Primary inguinal hernia is a heterogeneous disease which with the increasing age of the patient, shows a rising incidence and also a tendency to bilaterality. The optimal surgical approach must be selected individually. Though no true gold standard exists, the TEP procedure is the main pillar of operative treatment which synergises the advantages of minimal access surgery, tension free mesh repair and the Stoppa’s repair.