Devices for the Failing Heart

The future is here

Mechanical circulatory support is an important adjunct to the management of patients with advanced heart failure. Technology advances in this area have improved overall survival. The challenge for clinicians is to translate the clinical evidence into selection of the most appropriate device that will provide benefit for an individual patient.

Mechanical Circulatory Support (MCS) is an important adjunct to the management of patients with severe heart failure. Because the number of donor hearts available for transplantation is limited, the use of MCS is growing as a valid alternative to save the lives of patients who are facing death.1

There is substantial evidence that MCS is able to revert the cascade of pathophysiologic events observed in patients with advanced heart failure. Although there are established protocols to assess ventricular
recovery post-MCS, there is still no parameter available that allows estimation of how long the improved cardiac function will persist.

Let us have a look at the current clinically available mechanical support devices, their indications for use and the specific advantages and disadvantages associated with each device.

Patients who present a cardiogenic shock after an AMI are excellent candidates for either short- or long-term mechanical support because they have not developed the systemic organ dysfunction seen with chronic end-stage heart failure and have the potential for myocardial recovery.

Patients with post-surgical shock can be divided into 1) Those with pre-existing ventricular dysfunction and therefore a low chance of recovery and 2) Those who had normal ventricular function before surgery and may recover with short-term support.

An Abiomed BVS 5000 may be the most appropriate choice for the patient with previously normal cardiac function while immediate use of an implantable left ventricular assist device (LVAD) may be the wisest choice in patients with pre-existing severe myocardial dysfunction.3,4 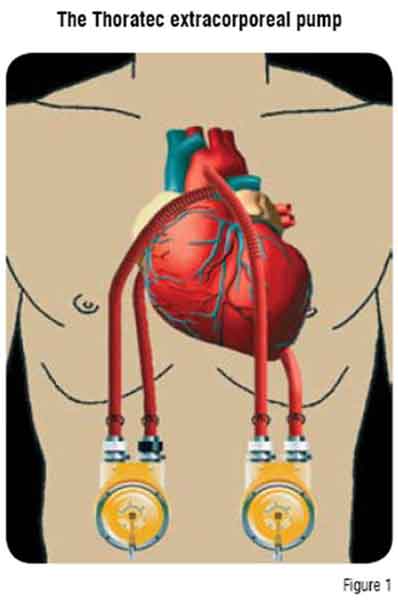 Acute myocarditis is another common indication for cardiac mechanical support. Short-term support is indicated in patients with persistent hemodynamic instability despite maximal medical therapy. Failure to demonstrate adequate myocardial recovery should prompt evaluation for conversion to a long-term device.

Decompensation of chronic heart failure is the most common indication for long-term MCS.

Goals of mechanical circulatory support
The majority of experience with MCS has occurred in patients supported temporarily as a bridge to transplantation.

One important observation during the bridge-to-transplant experience was that some hearts recovered sufficient function to have the device removed. Given the shortage of donor organs, all patients undergoing MCS should be systematically evaluated for evidence of myocardial recovery. The bridge-to-recovery will be most successful in patients with post-surgical cardiac failure, acute myocarditis and AMI who have a high chance for cardiac improvement in accordance with the nature of their diseases.

The use of LVADs as an alternative to heart transplantation (destination therapy) has demonstrated significant survival benefits in these patients.5,6

Extracorporeal devices include the Abiomed BVS 5000 and Thoratec, which are both capable of biventricular assistance. Implantable devices designed for left ventricular support are the Novacor N1000PC, the HeartMate Pneumatic and the Vented Electric LVADs.

Thoratec
The Thoratec paracorporeal pump is a pneumatically driven, polyurethane sac designed for long-term use (Figure 1). The Thoratec VAD system is indicated as a bridge to transplantation and a bridge to recovery.
The pump is positioned on the external abdominal wall with cannulae tunnelled subcostally into the mediastinum. The Thoratec VAD provides uni- or bi-ventricular support.8 These cannulae are connected to an external pump (one for each ventricle), consisting of a rigid housing chamber containing a polyurethane blood sac. An external drive console sends pressurised air to the pump, compressing the blood sac and ejecting blood through mechanical valves.

The external position of the pump allows device exchange in cases of malfunction, thrombus or infection. Furthermore, this also enables use in patients who are poor candidates for implantable devices. Patients require systemic anticoagulation for the duration of the Thoratec VAD implantation.

Intracorporeal devices
HeartMate
The HeartMate LVAD is implanted in a preperitoneal pocket, anterior to the posterior rectus sheath and just below the left costal margin (Figure 2). The inflow cannula is connected to the apex of the left ventricle and the outflow cannula is anastomosed to the ascending aorta. There are two types of HeartMate devices. The Implantable Pneumatic LVAD (IP-LVAD) is powered and controlled by an external pneumatic drive console that rests on a wheeled cart. The Vented Electric LVAD (VE-LVAD) contains an electric motor within the blood pump housing. It receives external power and control signals from an external microprocessor via a vented drive-line. Both systems have porcine valves and textured blood-contacting surfaces that become covered by a ‘pseudoneointimal’ layer. This results in a very low incidence of thromboembolic events and, therefore, patients do not require systemic anticoagulation. 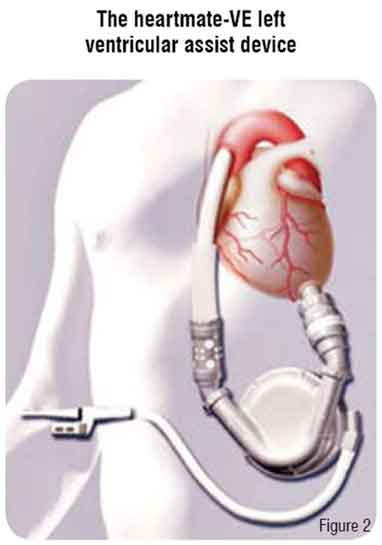 Insertion of the HeartMate is difficult in patients with a body surface area less than 1.5 m2 due to anatomical constraints. The major complications occur early and include haemorrhage and right heart failure. Infection remains a common complication (30-50 per cent) with prolonged use and is the biggest impediment to long-term success.

The Novacor shares many similarities with the HeartMate system including an external drive system with a portable power pack option. The device is implanted via sternotomy with an inflow conduit to the left ventricular apex and an outflow conduit to the ascending aorta. The pump itself is positioned in an abdominal subfascial plane or intraperitoneally with the tunnelled drive-line exiting the abdominal wall. A console or portable system regulates the pumping rate. The Novacor LVAD device requires systemic anticoagulation to prevent thromboembolism (risk 5-7 per cent). The incidence of primary device failure is very rare.10

CardioWest Total Artificial Heart (TAH)
The CardioWest is currently the only total artificial heart approved for use in the US under an FDA investigational device exemption (Figure 3). This device is pneumatically driven and implanted in the orthotopic position. The pump consists of a rigid pump housing that contains dual spherical polyurethane chambers. The dual ventricular chambers are anastomosed to native atrial cuffs and the outflow conduit is anastomosed to the great vessels. Dual pneumatic drive-lines exit transcutaneously to a console control system which monitors pump pressures and performance. Antiplatelet and systemic anticoagulation are needed.11,12 This device is used as bridge-to-transplant in patients with biventricular failure. 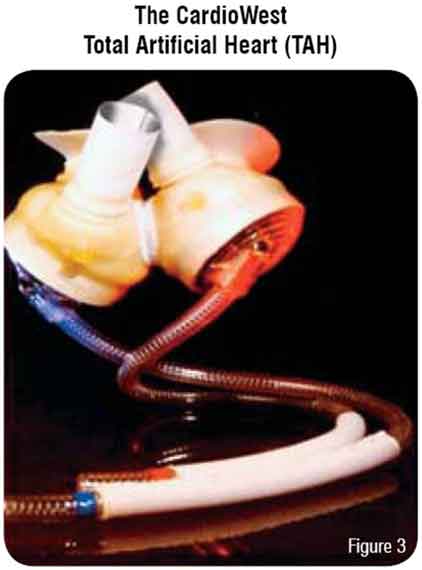 AbioCor TAH
The AbioCor TAH is the first fully implantable replacement heart. It has been approved by the FDA as an investigational new device to be tested on selected patients.13,14 The AbioCor consists of an internal thoracic unit, an internal rechargeable battery, an internal miniaturized electronics package and an external battery pack. The thoracic unit is equipped with an internal motor that is able to move blood through the lungs and the rest of the body. The use of transcutaneous energy transmission eliminates the need for the patient to be immobilised permanently by tubes or wires connected to an external power source thus possibly reducing risk of infections.
Devices in clinical trials include the Heartmate II, the Micromed DeBakey VAD, and the Jarvik 2000 (Figure 4). The DeBakey pump has already been successfully implanted in a small number of patients in Europe.15,16 The Heartmate II and the Jarvik 2000 have also been successfully implanted in humans.17,18 Unfortunately, there are few options or backup mechanisms other than replacement. Additionally, since these devices do not have valves, if a malfunction occurs the patient may develop the equivalent of wide-open aortic insufficiency.

Short-term support provided by centrifugal pumps has been shown to be a safe and simple cardiac support system with an overall wean rate of 50 to 60 per cent and a survival to discharge rate of 25 to 40 per cent.19,20,21 The use of short-term devices in selected high-risk patients as a bridge to long-term devices has shown survival rates no significantly different from the survival rate after long-term support alone.22
Successful transplantation is accomplished in 60 to 65 per cent of patients who received a long-term device. Between 28 to 38 per cent of all supported patients are discharged from hospital and managed as outpatients. Patients with LVAD have a higher survival to transplantation rate than the non-LVAD patients.23
CardioWest TAH provided a survival to transplantation rate of 75 per cent and a survival rate post-transplant >80 per cent There are limited published data regarding axial flow pumps, AbioCor TAH, and other LVADs; however, early results have shown safety, efficacy and reliability.

Device Selection
Device selection depends not only on specific patient characteristics and the etiology of the patient’s heart failure, but also on device characteristics, device availability and the experience of the surgical team.24
Patients in profound post-surgical cardiogenic shock require support to avoid permanent end-organ dysfunction and increase their chances of survival. The preferred devices are the Abiomed BVS 5000 and Thoratec device. These devices may provide full biventricular support re-establishing near normal haemodynamics while awaiting myocardial recovery. If prolonged support is expected, conversion to a longer-term device such as an implantable LVAD or TAH should be considered. The Thoratec device has the advantage of providing long-term, extracorporeal support.

Device selection for long-term support is much more complicated and often is subjective and based on the surgeons experience and bias. For smaller patients (BSA <1.5m2), the Thoratec device and eventually a continuous flow pump are the only options. For the larger patient, all devices are potential options. Most frequently an implantable LVAD is used but the CardioWest is useful for severe biventricular failure.

Summary
Mechanical circulatory systems have been shown to be an effective short-term therapy as a bridge to transplantation and as permanent cardiac support. The technological and human resources required to implement a mechanical assist device programme represent major limitations. Unfortunately, this technology is currently used only in dedicated centres.

The next generation of mechanical assist devices will provide hope for the burgeoning number of patients with end-stage heart failure, regardless of their eligibility for transplantation.

Diego Delgado is an Assistant Professor in the Division of Cardiology and Transplantation at the Toronto General Hospital, Canada. His interests are immunologic aspects of heart failure and transplantation. He is the Past-Chair of the Canadian Cardiac Transplant Group. He is the Vice-President of the Interamerican Society of Cardiology.