Nanotechnology has all the potential to become a disruptive and revolutionary technology in terms of its healthcare application. However, there are a few ethical concerns which need to be sorted out before its wide-spread use in healthcare.

Nanotechnology, or the science of the small, has become the buzzword of academic and industrial circles, which has diversified across various verticals such as healthcare, aerospace, defense, materials and many more. The beginnings of nanotechnology could be attributed to Sir Richard Feynman who in his landmark lecture titled ‘There is Plenty of Room at the Bottom’ envisioned the possibilities of manipulating nanoparticles essentially of atomic scale to modify and enhance the properties of materials that are in use today. Studies in the field have shown that the constituent particles of nanoscience—namely fullerenes, dendrimers and Carbon Nanotubes (CNTs)—are the fundamental building blocks of nanotechnology. Further, the change of physical properties at the atomic level that typically behave differently when viewed at the macrolevel, beckons the possibility of developing novel materials with unique properties. Owing to these changes, these nanomaterials could find use across an array of applications.

The word ‘nano’ is being synonymously used with innovation in every domain and the healthcare and life sciences domain is no different. The cardinally important application of nanotechnology is in the field of materials; biomaterials to be more specific. But since the application of biomaterials is in variegated medical applications, the penetration of nanotechnology is seen in a myriad of uses in the medical device realm.

The main reason behind the hype of nanotechnology, in the biotechnology and medical realms, is due to the basic nanometer size of its material particles. The nanometer size, allows the particles to be accouter in heterogeneous biotechnological / diagnostic device applications because the miniscule size allows the nanoparticle to be used in situations where a penetrating skin barrier is needed. Further, due to the nano size, the particles can be coated or attached to individual molecules and used to target specific molecules within the human body. Facilitating the research and commercial focus on nanotechnology is the fact that an assortment of nanoparticles, due to their submolecular size, exhibit variegated properties of molecular interaction. One such property is ‘self-assembly,’ which is primarily exhibited by carbon CNTs, graphite nanoparticles and organic fullerene particles. The property of self-assembly allows the particles when excited using a chemical or electromagnetic means to form a spherical or rod-shaped assembly of particles due to atomic forces such as van der Waals forces and so on.

Some of the key properties of nanoparticles and how it helps in unlocking potential applications in medical field is depicted in Figure 1. 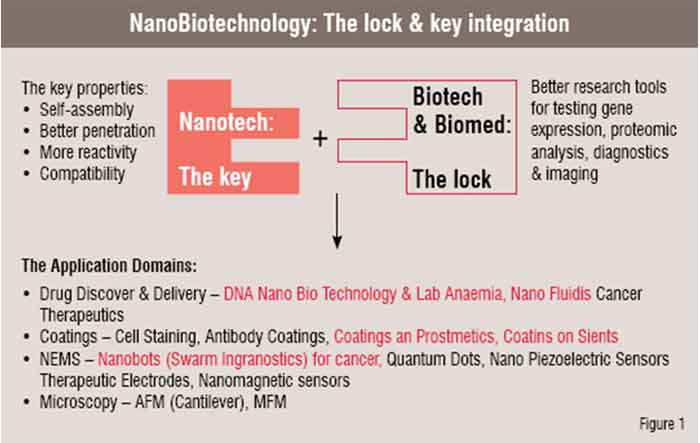 Key Unique Selling Prices (USP) are generated through the application of nanotechnology in most technology / product domains. Conventional technologies can be developed into variegated applications based on the unique properties rendering unique selling price or unique value propositions. Examples of such devices would be:

Application: Nano targeted drug delivery and nanorobotics
USP:
• Nanoscale sizes result in easier penetration and aids in targeting diseased cancerous cells of micrometer sizes for delivery of medicines
• More reactivity due to more surface area results in more accurate sensing of the diseased region inside the body
• Self-assembly property enhances the effect as the nanoparticles will be able to home into each other’s signals towards the diseased region.

To the general population, nanotechnology is just another out-of-the-world concept while in reality it is not so. Here, it would be wise to keep in mind that nanoparticle technology, or rather nanotechnology, is not an out-of-the-box concept that has been recently used. Research performed by a Russian scientist, Mal'tseva T. A., in the late 1960s exhibited the antimicrobial facets of silver particles, where the scientist coated fabric with tiny silver particles, to render antimicrobial property to the cloth. Hence the use of miniscule metallic particles dates back to antiquated research. Further, ancient medicinal fields such as Ayurveda quintessentially made use of powdered versions of various substances as an effective cure for a myriad of ailments.

Hence, the questions that automatically haunt the mind are why there is any need to mobilise funding and resources and take a nosedive to explore nanotechnology on a large scale through a national initiative? What will be the use and impact of such an endeavour? And how will it aid in developing better solutions?

It is best to state at this point, that the intriguing part behind nanotechnology is not in its conceptualisation, but in our present day capability to create and control nanoparticles (of different materials) in vitro resulting in studying and excavation of newer properties and applications. Hence, here lies the driving force behind the need to theoretically understand, practically research, and conclusively analyse the developments in nanotechnology in depth as only through further and organised research can the truthful implications and futuristic applications of nanotechnology be achieved. But a national initiative doesn’t end the work process. It should rather serve to be the stepping stone to segregate work, take up responsibilities and bring out safe and effective applications or product innovations with technical advantages and high-end utilities. In case of some diseases, such as cancer, a national nanotechnology endeavour with a cardinal focus on biotechnology or medical applications can bring forth novel diagnostic or therapeutic kits and life-saving technologies.

Nanobiotechnology and product development are more of ‘An Evolution than Revolution’. This was the comment made by Phil Bond, the US Undersecretary of Commerce in a conference. However, on a closer look into this concept, it is found that not only nanotechnology, but most technological developments in the present day world happen through the process of necessity and evolution. In this evolution of technology, the advancements happen in a plethora of verticals, starting from materials to electronics to energy. A sudden revolution is seen when different verticals suddenly come together and integrate with each other, resulting in the development of a quite out-of-the-world technology from the present day perspective. From Frost & Sullivan's perspective, nanotechnology has all the potential to become a disruptive and revolutionary technology in terms of its healthcare application. However, this will depend on smaller and individual developments, which will eventually lead to a revolution disrupting the present world technology.

VC funding in nanobiotechnology has seen a mushroom growth since 2005. This is owing to the fact that the VCs have, in recent times, seen constructive practical healthcare applications of nano-based products enter the commercial markets. This has helped them allay their scepticism and fear of the high risks in this domain and invest more. However, there is still a huge lack of standardisation and regulatory gaps in the nanoanalytical tools and devices domain, which might make product commercialisation a big problem at a later stage.
At present the vendor and supplier bargaining power is high in this industry owing to lesser number of industry players with an effective commercial product to penetrate the market. This makes the threat of new entrants higher into this industry both as raw material suppliers and as technology or product vendors. The consumer bargaining power is also high due to alternative technologies present in the market. All these above mentioned factors make this industry extremely attractive and competitive.

With the advent of nanotechnology and introduction of new concepts based on the new technology, the field of biosensors received a boost. Much funding and capital is being invested in the development of nanobiosensors, which has promise to be a disruptive technology once it hits the commercial stage. Although they could provide a non-surgical invasive biosensing alternative, nanobiosensors have to undergo enormous development from the standpoint of biocompatibility, controlling a nanoswarm in its environment, with the capability to be replaced in case of defects.

Similarly, with the advent of nanotechnology, the field of neurostimulators, like many others, will receive a boost, since many new concepts are to be introduced and implemented. This will continue to happen as and when the excavation through research and corresponding developments in the field of nanotechnology happen. Concepts such as self-targeting brain and neuronal implants, which can invasively attach themselves at specific locations of the nervous system, providing automated in vivo neuronal therapy, now seems to be a definite possibility. Much funding and capital is being invested in the development of nanoneuroprosthetics, which will promise to be a disruptive technology once it hits the commercial stage. Although nanotechnology could provide a myriad of variegated applications, nanoparticle therapeutic devices have to undergo enormous advancements from the standpoint of biocompatibility, controlling nanoswarms in the in vivo environment, and in its capability to be replaced in case of defects.

At present, the US and Europe lead the way in applying nanotechnology for medical applications. The funding from federal governments, extensive collaborations and opportunities for spin-offs are the key reasons for the leadership of these countries in the field. Asian countries serve as hubs for contract research for American and European conglomerates. The revenue generated from such outsourcing has slowly begun to boost the Asian economy towards investing heavily in indigenous research and application.

Nanotechnology as a field does have many bioethical concerns which might work against it as a commercial product. Bioethics pertains to the ethical questions that arise in the field of medicine and biology. Disagreement exists about the proper scope for applying ethical evaluation while developing or licensing a technology for patients. Bioethics generally deals with public policy questions, which are often excessively publicised and politicised. There is a tendency among medical engineers, scientists and others involved in the development of a technology to perceive ‘bioethics’ as an attempt to derail their work and obstruct it regardless of the true intent.

Nanoparticles have emerged as a source of concern due to the possibility that they may be absorbed through the skin, or inhaled, with as yet unknown health consequences. Lab animal tests have indicated that some nanomaterials, such as carbon nanospheres and nanotubes, can cause fatal inflammation in the lungs of rodents; they can also cause organ damage in fish, and can kill ecologically important aquatic organisms and soil-dwelling
bacteria. A recent research published in Nature Nanotechnology reveals that some long strands of CNTs are as toxic as asbestos and can cause cancer. Nanoparticles can also stunt the growth of roots on several crops. A number of bodies—including the Royal Society, Britain's scientific body, and the Royal Academy of Engineering—have stated that nanoparticles could be a cause for concern.

Conclusion
The development of nano-healthcare applications is influenced directly by the policies and principles of bioethics because the end user is primarily a diseased human being who has his / her own set of values, principles, and ethics. Hence, nano-healthcare applications, especially invasive ones, have to undergo a scrutiny at the end-user level, despite all FDA approvals. A lot of turmoil is brewing as nano-healthcare applications emerge and arise because they are objects that the patients can never perceive with their own eyes. Moreover, their small size could make it impossible to replace the sensor in case of a defect. Furthermore, products such as nanobiosensors and nanobots are yet to be approved as ‘safe’ by the FDA, although huge funds are already at stake in their research.
Here lies the rift between nano-healthcare applications and bioethics, which only time and dedicated research towards maintaining patient safety can resolve.

Abhishek Dutta is a Research Analyst with the Frost & Sullivan Technical Insights team. He focusses on tracking and analysing global emerging trends and technologies pertaining to the Healthcare industry. He has authored several research studies in the medical device domain and has consulted very many top medical companies on technology/industry. He contributes to the medical device and medical imaging alerts on a regular basis.