Can they replace PET?

Functional Magnetic resonance imaging tools have now become widely available and allow viewing beyond the morphology of physiologic and pathologic tissue. Using innovative sequence design and modern MR contrast media, most methods can be easily integrated into the standard #MRI protocols and make a combined assessment in one single exam possible. Although MR is still less sensitive than PET imaging, functional MRI tools end up as a comparator using to some of the assessments, e.g. perfusion imaging or diffusion MRI, even the same modelling strategies of the imaging data are used.

While in the past, MRI was praised mainly for its superb anatomic display and tissue contrast, a number of advanced, non-enhanced and contrast-enhanced MR imaging techniques have been developed in the past years that provide new insights into the physiology of tissues and the pathophysiology, for example, of tumours. These techniques include MR-spectroscopy, perfusion MR imaging, dynamic contrast-enhanced MRI and diffusion tensor MR.

The provocative question, if these methods may one day replace PET in oncological imaging, needs to be discussed.

Today, the combined PET-CT acquisition is becoming the standard in the assessment of focal and systemic cancer. PET-CT provides a n excellent combination of morphological and metabolic imaging and identifies tumorous lesions that are at least 5mm in diameter with the uptake of e.g. fluorine-18 FDG. With the use of a combined system one has the possibility to locate those lesions with a high precision. PET-CT, however with its limited spatial resolution, fails to detect lesions smaller than 5mm reliably. Therefore, MRI could perhaps aim to compete by realising its high-resolution potential.

Whilst FDG-PET is the standard tracer method in most cancer types, alternative tracer methods with a more specific uptake are investigated and may allow for a better imaging of anti-tumour effects involving angiogenesis, apoptosis and reporter gene expression.

But if the advocates of both of these modalities view each other as rivals, how can they help each other? Instead they should answer following questions: What can functional MRI learn from PET and vice versa? How and when can MRI be used instead of PET? These questions can form key for panel discussions for the radiological community.

Proton magnetic resonance spectroscopy of Chemical Shift Imaging (CSI) is becoming a common clinical tool because it can add to the diagnostic accuracy of MR imaging. In neurooncology it has been shown that MRS, especially if combined with the later described MR perfusion, is able to increase the sensitivity and positive predictive value in the determination of the glioma grade when compared with conventional MR imaging. The use of modern scanner technology further allows to measure spectroscopic data from a single voxel. Two or three dimensional MR spectroscopy (2D or 3D CSI) help to acquire multiple small voxels which give better information about the heterogeneity of a lesion. The voxel information can be used to calculate metabolite ratios which can be colour-coded and overlayed on the anatomic images to better visualise, for example, hot spots within the tumour.

Follow-up assessment of tumours is another promising field for MR spectroscopy. Increase in size and contrast enhancement are typical findings in tumour progression but they also reflect therapy-induced changes. The same is true for postoperative changes. Magnetic Resonance Spectroscopy (MRS) provides, beside the definition of extent of changes, the metabolic fingerprint of a lesion which can be further enhanced by the analysis of the quantitative ratio of tissue metabolites such as N-acetylaspartate (NAA), creatine, choline and lactate.

Perfusion-weighted imaging (PWI) is a new tool which provides information about the hemodynamics of anatomic tissue or lesions and is mainly used in the assessment of disturbed cerebral hemodynamics, e.g. in stroke MRI. In brain tumours, the method showed benefits for three major fields: differential diagnosis, biopsy planning, and treatment monitoring. MRI can now provide quantitative information of the underlying pathological tissue with the help of PWI. It can also provide better metabolic information about brain tumour biology with the help of MRS. PWI in neurooncology is mostly performed on the basis of T2+ weighted dynamic susceptibility contrast-enhanced (DSC) MR echo-planar imaging approaches. Newer perfusion imaging approaches, which do not need extrinsic contrast media application, use the blood as intrinsic contrast media.

Dynamic Contrast-Enhanced Magnetic Resonance Imaging (DCE-MRI) describes the acquisition of serial T1 weighted images before, during and after the appearance of extracellular low-molecular weighted MR contrast media in the tissue. The resulting signal intensity measurements of the tumour reflect a composite of tumour perfusion, vessel permeability, and the extravascular-extracellular space.

DCE-MRI has been used in quite a large variety of clinical oncologic applications including body cancer detection (e.g. The DCE-MRI). It allows to measure the vascular permeability and its aberrations, while the microvascular density (MVD) describes the histopathologically partial picture of the tissue microvasculature. Furthermore, MVD is also a heterogeneous property of tumours and is limited by histopathologic sampling and are generally hotspot values. The measurement of the tumour microvascularity using the DCE-MRI method has found to be well correlated with prognostic factors such as tumour grading, angiogenic factors, e.g the vascular endothelial growth factor expression (VEGF) and with the risk of recurrence or simple survival outcome measurements.

Dealing with modern chemotherapeutic approaches, the use of DCE-MRI in follow-up studies is becoming more and more important. Since the anti-angiogenic therapies focus on the measured DCE parameters, the method may play an important role as a predictive marker.

Diffusion weighted MRI is used routinely in the assessment of cerebral infarction and infectious diseases. Both diffusion weighted and Diffusion Tensor Imaging (DTI) also play an important role in the diagnostic workup and monitoring of patients with cerebral tumours.
Another promising field is diffusion weighted imaging in the assessment of lymph node metastases. DTI is a promising new methodology which allows insight into the integrity of tissue of the brain. Lymph node imaging and prostate cancer are good examples in the description of tumour infiltration potentiality by this method. 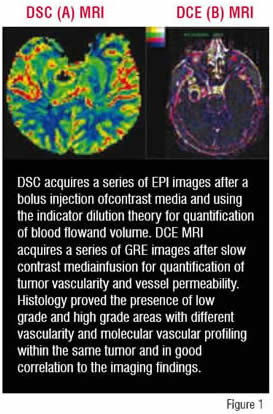 All methods can be integrated in the treatment monitoring in anti-cancer therapy. As at initiation, tumours in a pre-vascular phase are supplied by oxygen and nutrients that diffuse from pre-existing normal vessels, ischemia leads to the secretion of angiogenic factors when the tumour reaches a critical size. Angiogenic markers, such as VEGF, are responsible for the recruitment and maintenance of tumour vessels, which exhibit increased blood volume and permeability compared with normal vessels. MR-based techniques like dynamic susceptibility weighted (DSC) MRI or dynamic contrast enhanced (DCE) MRI can be used to measure the blood volume, the vascularity, the size of the vascular space within designated areas, and the behaviour of contrast within those vessels. DCE-MRI has been used in a variety of tumour entities and oncological applications including cancer detection, diagnosis, staging and assessment of treatment response. Tumour microvascular measurements by DCE and DSC-MRI have been found to correlate with prognostic factors such as tumour grade, microvessel density (MVD), and vascular endothelial growth factor expression (VEGF) and with recurrence and survival outcomes (Figure 1).

A group of researchers from the University in Munich are evaluating the role of perfusion MRI to monitor the efficacy of anti-angiogenic treatment in kidney cancer. This type of cancer has been shown to respond well to anti-angiogenic drugs. Functional measurements related to the tumour blood supply should provide a surrogate marker of whether the treatment strategy is working. This may not be obvious from measurements of the tumour size or morphology.

Work to standardise and to quantify diffusion and perfusion MRI procedures is just beginning. This will be most essential if multi-centric trials are to be conducted to be used for follow-up assessments and in clinical trials. However, it should be taken into account that for absolute quantification both diffusion and perfusion MRI require specifically tuned sequences and an extensive and time-consuming post-processing. 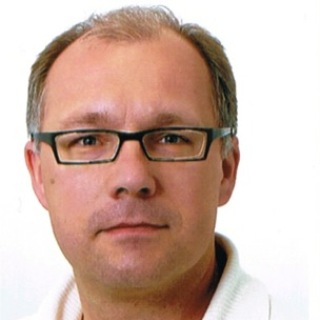