Heart failure, the burden of the current plague!

In this century Heart Failure (HF) is reaching such a spread that it can be defined as a pandemic disease, just like a plague. The prevalence of HF will increase to 3.5 per cent (2030) in the USA with an increase of health system costs to US$77.7 billion (2030). We should change health policies for HF control and management.

The plague pandemics have devastated the world through the centuries, remaining etched in history as scourges that have involved a large part of the population with high mortality rates, from the Justinian plague (541 AD) to the terrible black death (334), originated in China and spread along the great trade routes to Constantinople and then to Europe with a mortality of 60 per cent, to the modern plague of 1860. 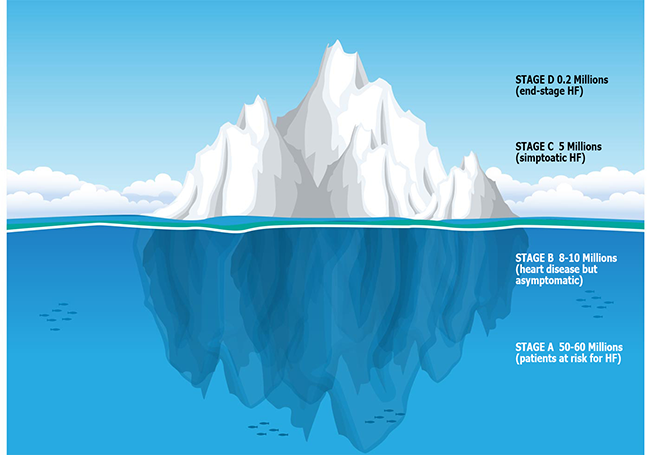 In this century, despite steady progress in terms of prevention and therapy, Heart Failure (HF) is reaching such a spread that it can be defined as a pandemic disease, just like a plague. HF is a major public health problem, with a prevalence of more than 5.2 million in the United States and more than 26 million worldwide. Incidence and prevalence reported in the medical literature vary widely, mainly because different sets of diagnostic criteria have been used. Contemporary studies estimate the overall prevalence of HF in the US population to be about 2per cent-3 [1] However, these data represent just the tip of the iceberg; in fact, in US, including also patients in stages A (patients at high risk to develop symptoms and signs of HF such as with hypertension, diabetes, coronary artery disease, family history of cardiomyopathy) and B (patients with structural heart diseases but asymptomatic), the numbers of HF dramatically rise from 5.2 million to 63.2-75.2 million, leaving as normal only a third of the entire US population [2] (Fig. 1). The incidence is 600.000 new HF cases per year in Europe and 500.000 in the USA with 1 in 5 adults over 40 years will have HF in their lifetime and 1 in 5 HF patients will die within 1 year. The patients suffering from HF have 6-9 fold increase in sudden death risk. The 3 major risk factors are age, diabetes and obesity. The prevalence of HF will increase from 2.8per cent (2010) to 3.5per cent (2030) in the USA with an increase of health system costs from US$24.7 billion (2010) to US$77.7 billion (2030). [3-5]. Heart failure inflicts both direct costs to healthcare systems and indirect costs to society through morbidity, unpaid care costs, premature mortality and lost productivity. The global economic burden of HF is very high. The overall cost of heart failure in 2012, in both direct and indirect terms, across the globe, has been evaluated [4]. Countries were categorized according to their level of economic development to investigate global patterns of spending; 197 countries were included in that analysis, covering 98.7per cent of the world's population. The overall economic cost of HF in 2012 was estimated at US$108 billion per annum. Direct costs accounted for ~60 per cent (US$65 billion) and indirect costs accounted for ~40per cent (US$43 billion) of the overall spend. Heart failure spending varied widely between high-income and middle and low-income countries. High-income countries spend a greater proportion of direct costs: a pattern reversed for middle and low-income countries. Japan and South Korea spent 553,393 and 81,422 millions of dollars for HF in 2012, respectively.

Patients with HF who died within 1 year after an index HF encounter incurred markedly higher costs within 1 year (despite the much shorter post-index period) than those who survived, with the majority of costs attributable to hospitalisations for both patient cohorts. [8]

Rehospitalisation is common among patients with heart failure following their initial discharge, accounting for about 30per cent of all cases [9]. In European studies, reported rehospitalisation rates range from 24per cent at 12 weeks40 to 44per cent at 1 year after discharge [10]. In the USA, 30-day readmission rates were about 20–25per cent, however, readmission rates of 60–67per cent have been reported with longer follow-up [11] . Short-term survival is also poor, with 1-year death rates typically between 20per cent and 40per cent. Some improvements in short-term and in-hospital death rates have been observed in recent years. [12-14].

Despite some ongoing improvement, long-term survival of patients after an episode of acute heart failure also remains poor, with reported 5-year death rates of around 70per cent [15-17]. In a community-based study in the USA, the 5-year death rate improved from 57per cent for patients newly diagnosed with heart failure in 1979–1984 to 48per cent for those diagnosed in 1996–2000. [17]

For patients, the physical limitations brought about by shortness of breath, loss of energy and fatigue associated with heart failure affect work, social and leisure activities. [19] Patients commonly experience social isolation, reporting limited ability to travel, socialize or take part in recreational activities. [20]
Psychological effects, including fear, anxiety and depression, are common among individuals with heart failure. [19] Furthermore, heart failure can have a marked effect on personal relationships, with the increasing reliance on others leading to feelings of guilt and frustration. In addition, family members often feel the burden of caring for a patient with heart failure, and these demands can have physical, emotional and financial effects on them. [19,20] Three different components make up patient self-care: maintenance, monitoring and management. Maintenance involves adherence to medication and lifestyle changes, while monitoring of the signs and symptoms of heart failure includes activities such as daily weighing to assess fluid retention. Self-care management means responding appropriately to any changes in symptoms – for example, by increasing the dose of medications prescribed for use as needed.

In conclusion, a lot of road has been covered, but otherwise it must be covered to try reducing the burden of this new plague. We should invest a lot of resources in preventing the transition from stage A to the other stages in order to avoid a further increase in the incidence of HF; we should move the management of HF out of the hospitals, with a home-care system employing disease-oriented care-givers or in territorial outpatient clinics, reserving hospitalisation only for the worst cases (stage C2-D). We should build risk models that identify the patients most predisposed to re-hospitalisation so as to be able to intervene to reduce the rate of re-hospitalisation of these categories. Only by implementing these health policies for HF control and management, we will avoid the noteworthy burden of HF not only in terms of mortality, but also in psychological, social and economic terms. 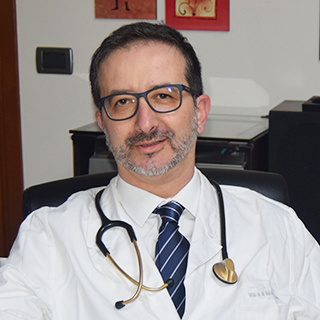 Medical Degree in 1999; Cardiac Surgery Diploma in 2004; Cardiology Diploma in 2015; Ph.D. in Cardiovascular Sciences in 2017; Assistant Professor of Cardiovascular Disease at University of L’Aquila. Author and co-author of hundreds of scientific publications. Member of SICCH; SIC; EACTS; ESC; ESC-HF, STS. Member of several groups of study.