Diagnosis of acute liver transplant rejection is crucial for the therapeutic implications and for the success of the transplant. DrSalsano explains how this can be achieved in children, with no invasive intervention but using Acoustic radiation Force impulse (ARFI).

Despite the improvements in immunosuppressive therapy, incidence of Acute Rejection (AR) remains as high as 50.3 per cent during the first year after surgery in this clinical setting, and liver biopsy remains the reference standard for its diagnosis.

Liver US already has a key role in monitoring the postoperative course of liver transplants. Color doppler ultrasonography is the gold standard for the patency and flow of hepatic vessels. The lack of ionising radiation, the non-invasiveness, and the positive cost-benefit ratio make these techniques advantageous with respect to traditional radiography, CT, and MRI. Ready availability and real-time information are additional well-known advantages. All these benefits are maximised in children for whom ionising radiation and LB should be avoided because of neoplastic and bleeding risks. Furthermore, the anatomic peculiarity of the abdominal wall in a child represents a favorable condition for the use of US techniques. Nevertheless, a major limitation of color Doppler sonography in liver transplant is the inability to diagnose AR. US-based elastography, namely ARFI SWE, is employed for the evaluation of liver fibrosis as an alternative method to LB. ARFI imaging has been used to identify the occurrence of chronic hepatitis or liver cirrhosis after liver transplant, but not for the diagnosis of AR in children. Previous studies also reported the association between high SWV values and inflammatory infiltration, hepatocyte swelling, and tissue oedema. These findings, all typical of AR, were underestimated and interpreted as confounding signs of fibrosis. It is well known that fibrosis affects liver stiffness, although other factors including inflammation, necrosis, fatty infiltration, or oedema may also increase liver stiffness. Necroinflammation increases liver stiffness measurement but even hepatic inflammation alone can result in an increase of the liver stiffness measurement superior to what would be expected as an effect of fibrosis alone. Furthermore, many extrinsic factors not directly related to fibrosis, such as extrahepatic cholestasis, intrahepatic cholestasis, and congestive heart failure, may have a significant overestimating effect on liver stiffness.

Dr Salsano illustrates his work recently published in the American Journal of Roentgenology [4].

The purpose of the study based at Bambino Gesù Children Hospital in Rome was to retrospectively investigate the ability of ARFI imaging to distinguish AR from other causes of liver dysfunction observed at LB (i.e., hepatitis, portal hypertension, cholangitis, and fibrosis), as well as to identify normal liver function at the protocol biopsies after pediatric liver transplant for nonviral diseases.

ARFI imaging and LB were performed within a timeframe of 5 days.

Liver stiffness was measured in the following way. Patients with left-lobe grafts were scanned in supine position using the anterior approach, below the costal arch. ARFI imaging was acquired in a site of the liver characterized by homogeneous parenchyma and devoid of any vessels or other liver substructures at standard B-mode imaging. Measurement 30–50 mm below the skin was chosen to standardize the examination. SWV was calculated as the median of 10 acquisitions and was expressed in meters per second. Because food intake modifies liver stiffness, evaluations were performed either after overnight fasting or before the first meal in the morning.

At LB, SWV was higher in patients with histologic alterations compared with patients with normal liver function (p < 0.01). Among patients with pathologic histologic results, SWV was significantly higher in patients with AR than in those with idiopathic hepatitis, portal hypertension or cholangitis. Using ROC curve analysis, a cut-off median SWV equal to 1.73 m/s was identified to obtain the maximum accuracy for diagnosis of AR (accuracy, 90.7 per cent). SWV was not predictive for idiopathic hepatitis, portal hypertension, or cholangitis, but it showed good diagnostic accuracy for the identification of absence of the previous classified conditions. As expected, SWV values were significantly higher during the first 6 months after transplant, likely in relation to the heighrates of AR during that time period.As presumed, the incidence of AR was significantly higher within the first week after transplant, and actually only one case of AR occurred after the first 6 months.

Dr Salsano explains that in his study all the major liver dysfunctions (acute rejection, hepatitis, portal hypertension, and cholangitis) were characterized by a different degree of inflammation, edema, cholestasis, and even necrosis and resulted in an increased SWV at scanning. As a part of the US-based non-invasive monitoring of a child with liver disease before and after liver transplant, and using the skill achieved in developing the pathologic grading of liver damage, the study aimed to identify AR and to distinguish it from other causes of liver dysfunction in a relatively homogeneous population of young children who had undergone liver transplant. The young age of the recipients, high-quality grafts, early evaluation during the postoperative months and absence of viral indication at risk of recurrence,provided a favorable setting for this study. Older patient age, use of adult whole grafts, presence of viral indications for liver transplant, and longer time between ARFI imaging and transplant may have played confounding roles in previous studies. “This is the first study in which ARFI imaging was predictive of AR after liver transplant in pediatric recipients” Dr Salsano explains.

Recurrence of hepatitis, which is the rule in hepatitis C virus cirrhosis, remains a confounding factor. This could explain the lack of specificity of ARFI imaging in the prediction of acute rejection versus hepatitis in previous studies. The values of SWV observed in cases of AR by Bambino Gesù’s team were higher than in cases of hepatitis, although they do not have a robust physiopathologic explanation for this finding. Histologically in AR there is portal inflammation with mononuclear cells (especially plasma cells and lymphocytes), neutrophils, and frequently eosinophils; bile duct inflammation or damage; and subendothelial inflammation of portal veins or terminal hepatic venules. The diverse types of inflammation are responsible for the differences in the increase of SWV in AR, hepatitis, cholangitis, and portal hypertension. The median SWV of a normal transplanted liver is very similar to that reported in the population of patients who has not undergone transplant. Conversely, the median SWV in AR stands out among all other categories. The small sample size of this study does not allow a statistical comparison between SWV in idiopathic hepatitis, portal hypertension, or cholangitis; nevertheless, SWV values registered in cases with biopsy-proved rejection were significantly higher than those with other conditions. The identification of an ARFI imaging stiffness cut-off value predictive of AR is a novel finding. This important clinical result will allow rejection episodes to be handled without the invasiveness of biopsy and related risks (i.e., bleeding, or vascular or biliary fistula) and guide immunosuppressive therapy. Also, this is the first study meant to evaluate the ability of ARFI elastography and SWV measurement to distinguish AR from all the other causes of postoperative liver dysfunction (hepatitis, cholangitis, and portal hypertension) in liver grafts for young children. In this study, ARFI imaging was predictive of rejection in more than 90 per cent of the available cases.

According to this new study ARFI imaging could be reliably used for first-line evaluations before biopsy, thus avoiding LB for young children, particularly when the bleeding risk is unsustainable. We are aware that liver stiffness measurements cannot replace LB, which remains the gold standard and fundamental to characterising the pathologic features related to liver AR in terms of type, grade, and severity. ARFI imaging for liver graft recipients could be offered as a screening tool to identify significant SWV alteration and to specifically target patients requiring LB, thus preventing systematic protocol biopsies. “We are already investigating the use of ARFI imaging during recovery after AR as this is the next step to tailor immunosuppressive therapy” explains Dr Salsano. Future investigations of the ARFI imaging in the liver transplant setting should also look to the early diagnosis of graft failure, which requires prompt retransplant. Yet, graft failure diagnosis due to non-vascular causes has been based only on trends of biochemical parameters, namely AST, bilirubin, platelet count, and to derive algorithms [5-6]. The role of ARFI in those cases of severe graft dysfunction is potentially vital due to the impaired coagulation profile, and the low levels of platelets that contraindicate the biopsy. 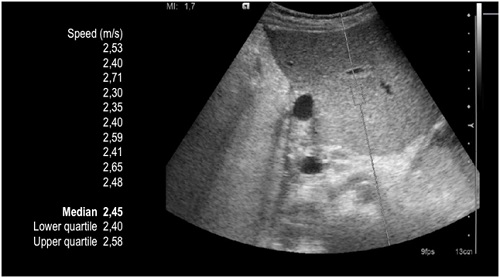 Figure 2
Example of ARFI sonography exam in a 32-months-old boy transplanted at 5 months for Alagille syndrome. The SWV is low and between normal values (median = 1.22 m/s, IQR 1,17-1,26). This suggests absence of acute rejection. Biopsy showed no rejection and a normal histopathological pattern. No changes in the immunosuppressive therapy were done. The boy is alive and well doing. 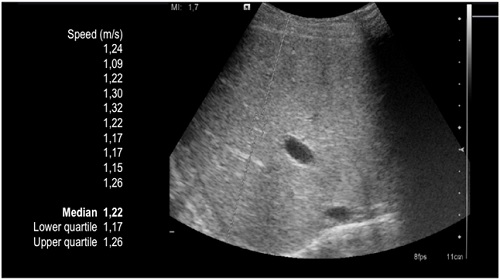 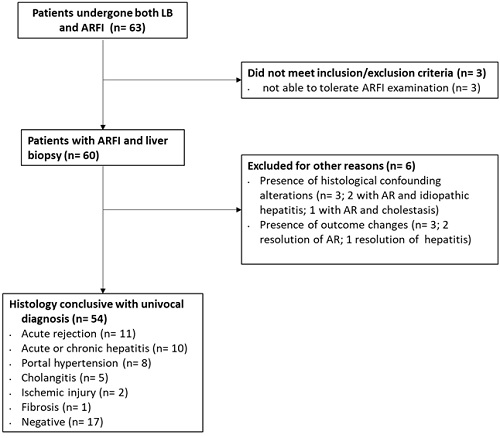 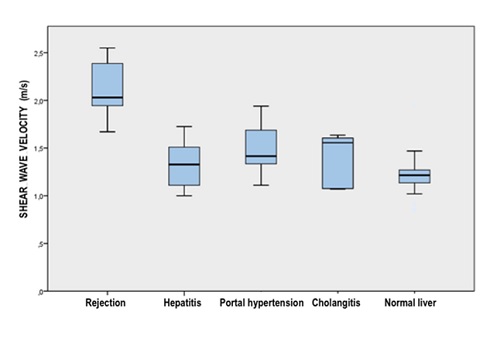 Figure 5
Receiver operating characteristic (ROC) curves of LS measurements by ARFI-SWV for the diagnosis of liver rejection, hepatitis, portal hypertension, cholangitis, normal livers. Area under the receiver operating characteristics curves (C-statistic) is reported in each category.The value obtained in the prediction of rejection is excellent (C-statistic = 0.966). It remains very good even considering the total number of enrolled cases (n=60, C-statistic = 0.930). 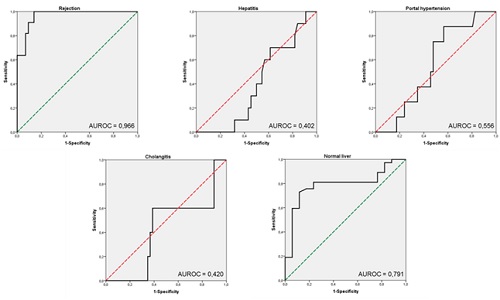 Salsano Marco is Interventional Radiology Consultant at Raigmore Hospital in Inverness (UK), and at Ospedale San Giovanni di Dio e Ruggid'Aragona (Italy). He collaborated with the Liver Transplant Unit at the Bambino Gesù Children's Research Hospital in Rome mastering his expertise in sono-elastography in teamwork with Dr Monti Lidia.

Monti Lidia leads the Gatrointestinal and Liver Radiology Unit at the Bambino Gesù Children’s Hospital in Rome. She is specialised in Gastrointestinal Imaging of native and transplanted children and in ARFI Ultrasound Imaging. She teaches pediatric radiology to fellows from the Catholic University of the Sacred Heart in Rome.