The fifth most common cancer in humans is also the most common cause of cancer deaths in developing countries. Annually, about 74,000 of 1,32,000 newly diagnosed cases result in deaths. Visible causes are sexual contact early in life, multiple sex partners, smoking, and consumption of birth control pills. It can be detected with Pap smear test and Visual inspection with acetic acid.

In a world of abundant options, awareness is a myth. As humans continue to go ahead in time and develop through science and technology, we no more have the time to pay attention to the details of our lifestyle. We are busy. Working, earning, and achieving goals have occupied the limelight of our priorities. Consumer culture is widespread globally and it gets hard to be aware of everything all the time. Within the structure of an urban life, lie a few deadly creatures that we ignore to notice… Just until they hit us or someone we love. Cancer is one such zombie that can silently creep through and within us at any point of our lives and snatch away the good from us.

Cervical cancer is the fifth most common cancer found in humans. Surprisingly enough, it is also the most common cause of cancer deaths in developing countries. Worldwide, there are approximately 510,000 new cases of cervical cancer with 288,000 deaths annually. 80 per cent of the sexually active women may acquire HPV (human papillomavirus) by the age of 50 which calls for a large-scale debate on vaccination against HPV.

Causes
Genetic modules to find the same are also being looked at. However, visible causes are sexual contact early in life, multiple sex partners, smoking, and consumption of birth control pills. These activities lead to the presence of HPV responsible for HPV infection which proves itself as the ultimate cause of cervical cancer.

As ageing begins, immunity tends to go down, resulting in higher risk of acquiring the disease. Another factor is the dormant nature of HPV. If a person acquires the infection at the age of 20, the virus will only start to express after 15-20 years, due to its dormant nature. Therefore, the risk of cervical cancer in women above the age of 40 is high.

Symptoms
Cervical cancer is one of the leading causes of deaths in women apart from breast cancer. Annually, about 74000 of 132000 newly diagnosed cases result in deaths and account to nearly one-third of global cervical cancer deaths. Therefore, it becomes inevitably significant for women to keep a track of any abnormal cellular activity in their bodies.

The symptoms can be marked by purulent discharge caused by a protrusion that extends from the cervix to the vagina. Lower abdomen pain, which can be confused with an inflammatory disease, also appears if the growth extends internally. Bleeding from the vagina between menstrual cycles, post-coital bleeding, and bleeding after menopause can be taken as major threats leading to cervical cancer. Since this disease is metastatic in nature, stage IV leads the infection to other organs of the body. Blood in sputum, breathlessness, and coughing occur when the cancer reaches the lungs. Kidney enlargement can also occur due to obstruction in the urinary flow causing increased blood pressure. At this stage, there is a dramatic increase in bodily toxins and a detoxification procedure is required. The patient becomeshighly prone to the symptoms of kidney failure, such as nausea, vomiting, and weakness due to low haemoglobin, which then leads to kidney failure itself.

Screening
As mammography is for breast cancer, pap smear is done to test cervical cancer. It is a procedure that takes a few minutes and hence can be performed on outpatients at an inexpensive cost. A sample of cells is taken from the cervix through a spatula and observed under the microscope for any abnormality. Mild treatment or preventive therapy may be life-saving options on early diagnosis of the disease.

Visual inspection with acetic acid, often abbreviated to VIA, is another closely principled procedure. Cells are placed in a 3-5 per cent acetic acid solution under the colposcope, and the mucosa (mucous membrane) is observed directly on the computer screen.

Treatment
Cervical cancer, depending on its severity, is treated through several methods. Cryosurgery, hysterectomy, cold-knife conisation, and laser surgery are common and lie under surgical procedures to treat the infection.

Another way to go is radiation, as it plays an important role to treat later stages of cancer. In some cases, radiation is given by aiming at the cancer from outside the body. This is called External Beam Radiation Therapy or EBRT. It is like an x-ray procedure, except that the dosage of radiation is stronger. Some cases need brachytherapy or internal radiation therapy. The source of radiation is placed directly in or near the cancer. Intracavitary brachytherapy, which is often combined with EBRT as the main part of the treatment, is specific to cervical cancer.

The most common form of treatment for cancer is chemotherapy. Anti-cancer drugs are injected into the bloodstream or given by mouth to kill cancer cells in most parts of the body. 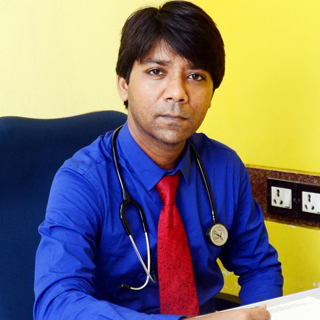 Bharat Chauhan is a renowned Oncologist from Mumbai in Maharashtra who is currently attached with Bombay Hospital, Sujay Hospital besides providing his expertise from Dr. Chauhan's Cancer Clinic and Chemotherapy Centre which is located at Jogeshwari. Dr. Chauhan has pursued MBBS from Maulana Azad Medical College (Delhi), MD in Medicine from Lady Hardinge Medical College (Delhi), and DM in Medical Oncology from the reputed Tata Memorial Hospital (Mumbai). Post completing his DM, Dr. Chauhan worked with Tata Memorial Hospital as Lecturer.He also spent some time working with AIIMS as Consultant Medical Oncology.