The Medway Nursing and Midwifery Accountability System (NMAS) is a model that calls nurses and midwives to account for their performance in relation to nursing care and patient safety.

The Medway NHS Foundation Trust is situated in Kent, approximately 40 miles east of London and 40 miles west of the coast of England. It is a large district general hospital and has regional services including Vascular and Neonatal services. It also has the busiest accident and emergency department in the county with over 80,000 attendances / year. The senior nursing team is stable and has worked together for a number of years. The Trust has been voted as one of the Nursing Times' top 100 employers of nurses in the country for the last three years.

In 2004, the Director of Nursing developed a system to measure the nurses' performance. She had been inspired by reading the ex-mayor of New York Giuliani's book Leadership (2003). In one of the chapters, Giuliani explains how he helped New York become safer using a system called Compstat. The three criteria of such a system are:

It was thought that these criteria could be used as the basis of a performance improvement for nurses in the Medway NHS Foundation Trust. The Director of Nursing devised a proposal for the nursing staff. This proposal set out indicators that should be collected and discussed on a weekly basis. The proposal was sent to the Heads of Nursing, the matrons and the senior sisters for comment during the summer of 2004. There were many comments about the proposal, but by September an agreed model was ready to be implemented. Table 1 provides the list of indicators that were agreed upon when it commenced. 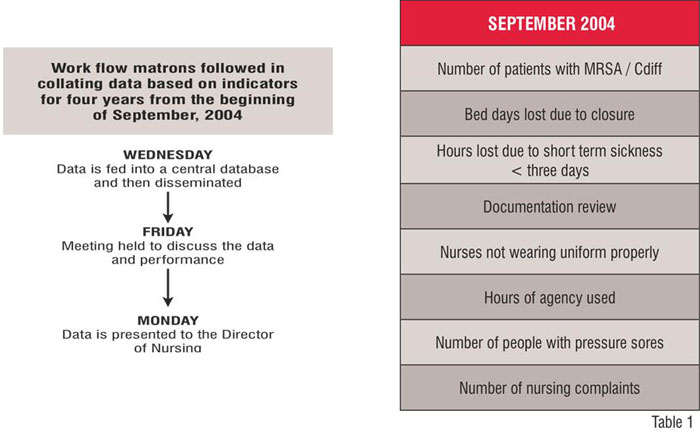 Every week, two or three matrons were asked to discuss their data for the last eight weeks for each of the indicators. Those presenting were accompanied by the senior sisters in the area. If their performance improved, they were asked to share how they led the improvement. This enabled their colleagues to learn different techniques and allowed good practices to be shared across the organisation. If their performance over the last eight weeks deteriorated, they were called to account for the situation and explain why things did not improve and what they would do in future to rectify the performance. Once the matrons present the data, the Trust evaluates and scores each of the indicators. The matrons who did not present that week understood whether they have contributed positively or negatively to the overall performance.

On the request of the matrons, the performance indicators were reviewed in April, 2005. The revised indicators are presented in Table 2. It was agreed that the indicators for MRSA, Clostridium Difficile and Pressure Sores would be more useful if they were classified according to those patients admitted with them-those acquired in the week in hospital and those who acquired them in hospital more than a week ago. The Trust made progress by reducing the involvement of the agency nurses so that the matrons could start measuring the use of bank nurses. They also thought that sickness should be counted within seven days rather than the first indicator of within three days. In September 2007, the indicators were reviewed once again and the fall in the number of patients was added as an indicator. 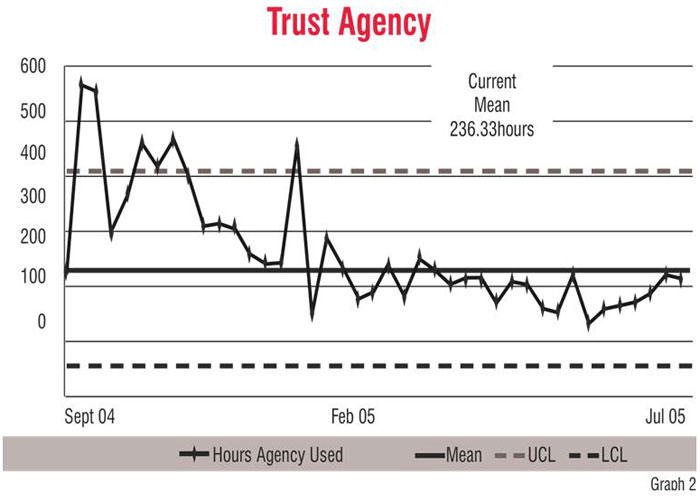 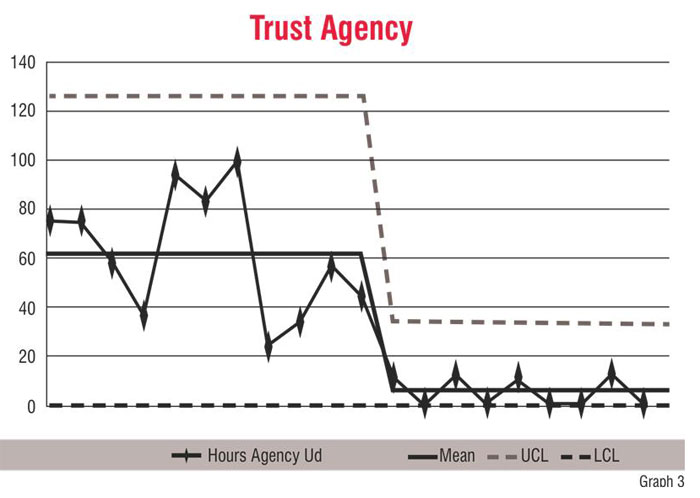 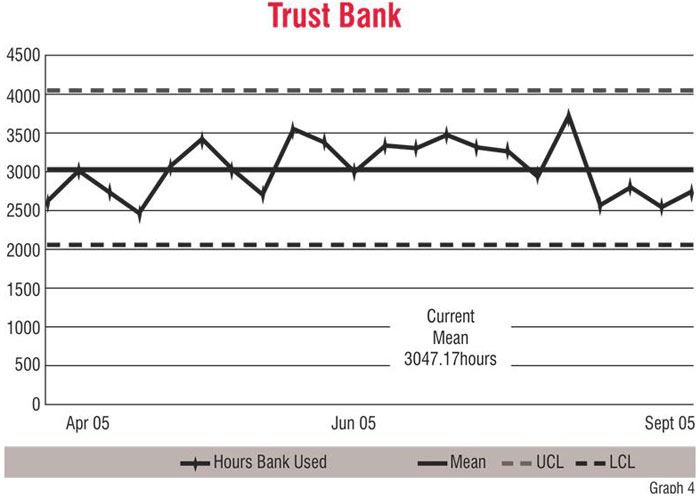 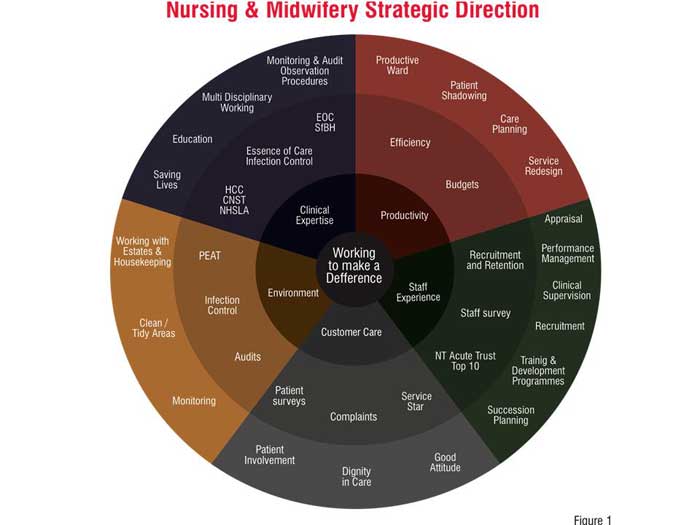 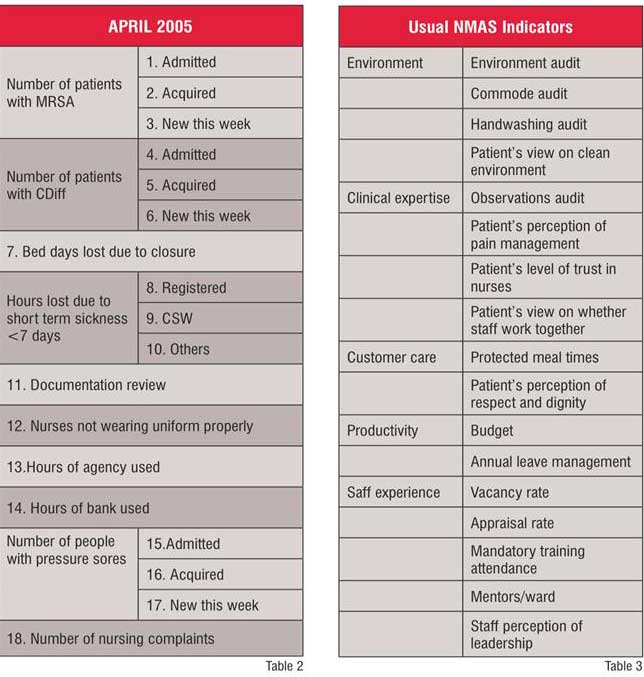 The graphs demonstrate some of the initial achievements the organisation had in relation to the indicators. Graph 1 shows the progress of the orthopaedic wards in improving the standard of documentation. The decrease in use of bank nurses in the general surgical wards can be seen in Graph 2. Graph 3 demonstrates that there was a drastic decrease in the use of agency nurses across the Trust. The straight line in Graph 4 shows that there was improvement in the performance during late 2005. However, it is important to know where performance is stagnant (a straight line) because it shows that the interventions that have been made did not have the desired effect and, therefore, required corrective actions.

The Medway NHS Foundation Trust is now implementing phase two of NMAS. This involves integrating all the nursing initiatives under a new strategic direction and identifying the performance indicators for all the aspects based on the original NMAS model. The strategic direction, which aims at an excellent patient experience, involves following aspects:

Each one of these aspects has a number of actions for each of the senior sisters. The senior sisters have 24 hour responsibility for the areas they manage and have also had their levels of authority agreed and clarified so that in the majority of their role they are able to act without having to ask line managers first. This is very important if they are to be held accountable for their performance. This is a major change in phase two-the senior sisters rather than the matrons are now held accountable for performance. For each of the five aspects of the strategy, there are ways to measure performance. These indicators have been added to the usual NMAS indicators (Table 3). These indicators not only cover factual figures on performance but also the patient's and staff's feedback on care and leadership in the concerned area. The strategy is illustrated in Figure 1 below.

To conclude, the Medway NHS Foundation Trust has seen many benefits from implementing NMAS. Some of them are:

Flexibility: It has been demonstrated through the above description that the system is not at all rigid and can change as the local or national healthcare agenda requires. The Trust has changed the indicators four times since its commencement to meet the needs of the staff.

Relevant data: The data is collected and discussed on a weekly basis. Therefore, the nurses have to account for current performance. In many performance review systems, the data is reviewed on a monthly or sometimes quarterly basis and, therefore, is not effective.

Agreed objectives: The indicators are agreed upon by the nursing staff and not imposed on them. As described above, the indicators have also been changed in response to the suggestions of the staff.

Focussed on performance: The model allows nurses to spare some of their time to focus on improvement and update their knowledge of their respective areas.

Weekly meeting: Weekly meetings with the senior nurses are considered beneficial to everyone. It is a very good forum for not only discussing performance but also to share good practice and focus the attention on the patient experience.

Accountability: The purpose of NMAS is to improve nursing care and, patient safety. It also ensures that the nurses are accountable for the patient care in the concerned area.

Transferable to other systems: The model proved successful in other systems as well. The model has been adapted in various systems in diverse organisations ranging from US police to UK nursing homes. In the UK, the model has been successfully adapted in acute care hospitals, thereby proving that it can be effectively used in community and mental health organisations as well.

Improved patient safety: By improving the performance in relation to each of the clinical indicators, patient care has become safer.

To summarise, NMAS has become totally embedded in the nursing culture of the organisation. It gives the nursing staff a framework for continuous improvement.

Jacqueline McKenna is the Director of Nursing and Strategic Planning at the Medway NHS Foundation Trust, a post she has held since 2000 having previously been Director of Nursing at Southmead NHS Trust in Bristol. She was awarded the Health Service Journal patient safety award in 2005 for her innovative Nursing and Midwifery Accountability System which is a performance improvement tool for senior sisters and matrons.