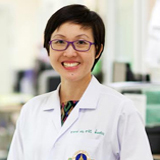 Dr. Tarinee Tangcharoen is a consultant in Echocardiography and Cardiac MRI and a non-invasive cardiologist lecturer at Ramathibodi Hospital, Mahidol university. She is also the co-treasurer of Thai Society of Cardiac Imaging. Dr. Tangcharoen published more than a dozen of research papers in Cardiac MRI. She graduated from Chulalongkorn University with a medical degree with honors.

How do you view the demand for cardiac MRI and How far along is cardiac MRI in the present state?
Although cardiac MRI is a new cardiac imaging modality, the demand for it has beenincreasingsignificantly in the past few years due to its one-stop-shop potential.Theimaging quality obtained by cardiac MRI is better than the one obtained by conventional technology such as echocardiography or nuclear imaging. This advantage helps clinician to detect the cardiac abnormalities earlier and more accurately. However, technicians need to be trained in using this modality in order to acquire high quality images.Therefore, cardiac MRI is not as available as echocardiography and it is performed mostly in tertiary centres or university hospitals.

How different is MRI from other imaging options in terms of time and quality?
Cardiac MRI is a versatile modality and providesmany pulse sequences – both with and without contrast – which allows clinician to assess almost every aspect of cardiac function such as systolic and diastolic function, ischemia and viability detection, valve function and also the extra-cardiac arteries. All of these can be performed in one scanning session. Thus, cardiac MRI is the combination of many conventional imaging modalities such asechocardiography and nuclear imaging in one machine.  The image quality obtained by cardiac MRI is better and also more accurate than echocardiography because it is less operator-dependent. Currently, the right ventricular function assessed by Cardiac MRI has been accepted as a gold standard.  Cardiac CT can also assess the myocardial function and ischemia but patients will be exposed to radiation. There is no radiation exposure in cardiac MRI scanning.  However, scanning time is still a drawback of this technique. Normally, patients will be in the scanner for up to 45 minutes for stress-viability sequence and possibly longer for complex congenital heart scanning.

How does the information provided by cardiac MRI findings affect clinical management decisions?
Overthe past few years, cardiac MRI has been recommendedas the imaging modality of choice in many clinical guidelines for both diagnosis and clinical managementdue to its ability to detect subtle cardiac abnormalities, which canbe difficult to detect by conventional techniques. For example, current guideline for managingpatients with hypertrophic cardiomyopathy recommends clinicians sending patients for cardiac MRI imaging when the echocardiography data is inconclusive or inadequate. For patients with suspected ischemic heart disease, current guideline recommends stress cardiac MRI as an alternative option to nuclear imaging for patients who cannot undergo stressexercise. Many studies have shown that stress cardiac MRI is more accurate than nuclear imaging in terms of sensitivity and specificity because of higher spatial resolution. Therefore, clinicians will be able to detect subendocardial ischemia or infarction accurately.

Are there limitations to cardiac MRI?
Yes, patients who are claustrophobia which means they are unable to stay in the small space for a period of time will not tolerate the MRI study.  Also, the MRI sequence which use the Gadolinium-base contrast such as the perfusion or viability imaging cannot beperformed  in the patients with impaired renal function especially when their GFR are below 30 ml/minute/1.73 m2. It is also challenging to obtain good imaging in patients with arrhythmic problems such as atrial fibrillation or frequent PVCs.

Is cardiac MRI considered a cost-effective technology?
Cost-effectiveness has been an interesting topic during the past few years especially when reimbursement is an issue.  The effective modality should be reproducible, provide less equivocal results and helps clinicians to diagnose disease early. Although cardiac MRI has clearly shownhigher accuracy for ischemia and viability detection compared tonuclear imaging, whether it is more cost-effective than nuclear imaging still remains a question. This is because there are many factors which affects cost-effectiveness. One study performed in Germany in 2013 has shown that stress CMRhas been proved to be more cost-effective than SPECT in patients with low to intermediate risk. Until now, we still need more studies to answer this question.

Any other comments?
Because cardiac MRI has tissue characterization assessment ability, it has potential to detect cardiac tissue abnormalities before the patients develop symptoms. Novel technologies such as T1 and T2 mapping allow us to accurately quantify the area of fibrosis and edema.  The scan speedhas also become an area of interest in the past few years. This helps patients stay shorter in the scanner while still obtaining adequate information.