Role of Catheter Ablation in the Comprehensive Management of Atrial Fibrillation

Atrial fibrillation (AF) is the most common arrhythmia that can lead to significant morbidity and mortality. Anti-arrhythmic drugs (AADs) are limited by a relatively low efficacy and substantial side effects. Interventional electrophysiology became an effective option in the management of selected patients with AF. Current guidelines recommend catheter ablation for patients with symptomatic paroxysmal or persistent AF for whom AADs have failed (class I). Patient with AF and multi-cardiovascular morbidities might have more recurrence rate of AF after ablation compared to those without significant morbidities. Advancement of technology would further improve the safety profile and clinical outcome of AF ablation. Future research would further refine our knowledge and might expand the groups of AF patients who would derive clinical benefit from AF ablation. Early referral of ideal candidate for AF ablation is much appreciated as it would be associated with better outcome at long term. 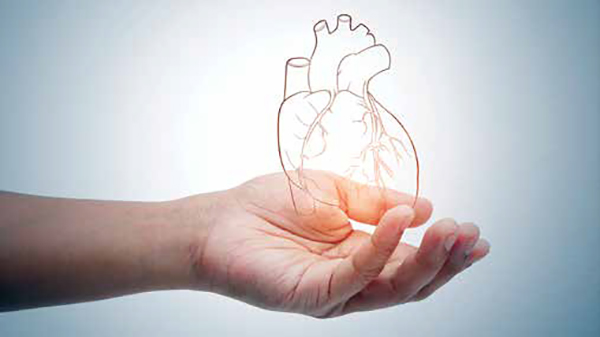 Atrial fibrillation (AF) is the most common sustained cardiac arrhythmia worldwide. The currently estimated prevalence of AF in adults is around 2 per cent. With ageing of the world population and intensifying search for undiagnosed AF, the prevalence of AF is expected to increase. Increasing age is a prominent AF risk factor, but other comorbidities including hypertension, diabetes mellitus, heart failure, coronary artery disease, chronic kidney disease, obesity, and obstructive sleep apnoea are also important and relatively modifiable risk factors which are considered potent contributors to AF development and progression.

Comprehensive management of AF consists of three main aims: 1- The alleviation of patient’s symptoms; 2- Prevention of tachycardia-mediated cardiomyopathy at atrial and ventricular levels; 3- Minimising the risk of stroke. The first two aims can be achieved with either a rate control or rhythm control (maintaining sinus rhythm) strategy. The third goal can be fulfilled by careful evaluation of AF patient’s risk of thromboembolic event according to CHA2DS2VASc score to determine the patient’s need for oral anticoagulation. For patients in whom a rhythm control strategy is chosen, catheter ablation (CA) and antiarrhythmic drugs (AADs) therapy are the two therapeutic strategies to reduce the frequency or eliminate episodes of AF.

AADs (class I and III) have been widely used for rhythm control in AF. Owing to the limited success and perceived side effects of AADs, CA has emerged as recognised option and early choice treatment strategy in certain groups of AF patients. With accumulating experience and the rapid development of new ablation techniques over the last two decades, the results of CA procedures have been significantly improved at terms of efficacy and safety.

Simply, CA for AF is a procedure to treat atrial fibrillation. It uses small burns (radiofrequency) or freezes (cryoballoon) to cause some therapeutic scarring on the inside of the heart to help break up or insulate the electrical signals that cause/trigger irregular heartbeats. 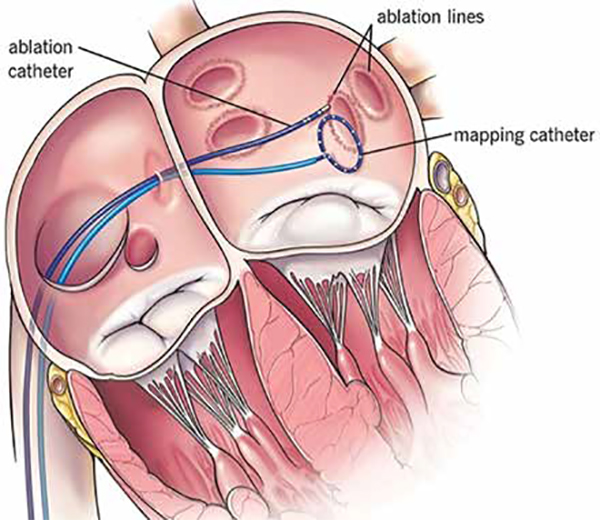 Current recommendations and guidelines regarding CA for AF

In general, CA is a recommended treatment option for AF when AADs therapy fails in controlling patient’s symptoms (class I).

Evaluation of CA efficacy is mainly measured on the basis of: elimination of late AF recurrence and decrease of the AF burden. Late recurrences of AF is defined as the development of any type of atrial arrhythmia lasting more than 30 seconds (AF, atrial flutter, or atrial tachycardia) between 3-12 months after the CA procedure. AF burden is measured as the percentage of time in which the patient’s cardiac rhythm spent in AF during a certain monitoring period. Early recurrences of AF within the first 3 months of follow-up are of limited clinical significance since only half of those patients will finally develop later episodes of AF. Based on the above success measures several clinical trials have shown that a first AF ablation procedure can eliminate late recurrences in approximately 70 per cent of patients with paroxysmal AF and decrease the AF burden by 80 per cent in a follow-up ranging from 1 to 5 years. Success rates are typically lower in patients with persistent AF reaching 50 per cent after a single procedure. For those with late recurrence or remaining significant AF burden, the success of the second AF  ablation (PV re-isolation) is >90 per cent.

CA for AF is a relatively safe procedure with overall complication rate varying between 2-3 per cent. The rate of complication might be affected by several factors like local centre’s expertise, learning curve, equipment available, local protocol, and patient selection approach, etc... Life-threatening complications, although very rare, can occur. In-hospital mortality following ablation varies between 0.6 and 2 per 1,000 patients. Cardiac tamponade is the most serious complication but is relatively uncommon with an incident rate between 0.6 per cent and 1.3 per cent but decreases with experienced operators, while local vascular complications are the most common type of adverse effects related to the procedure. Other recorded very rare complications include early or late presentation of pulmonary vein stenosis, catheter entrapment, periprocedural embolic events, phrenic nerve injury 0.4 per cent, atrioesophageal fistula 0.1 per cent, vagal nerve injury and pericarditis. Several patient’s related variables could increase complications rate like advanced age, obesity, multi-morbidity have all been associated with an adverse outcome after CA. 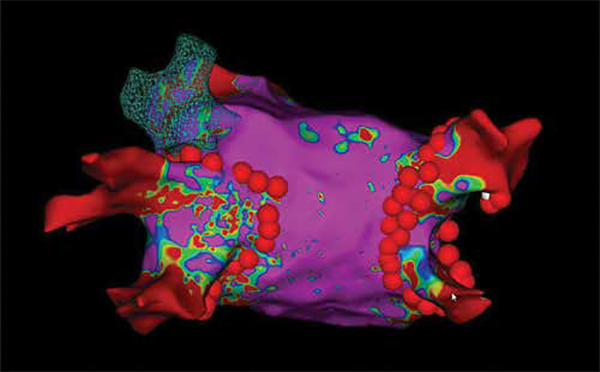 Defining the ideal or best AF candidate for CA

In seeking the AF patient who will gain the most benefit from a CA treatment strategy, several factors have to be taken into account. The expected low probability of late AF recurrence after CA, the improvement in the quality of life, and the decrease in the long-term morbidity and mortality should be combined with the lowest risk of periprocedural complications. Advanced age, long AF duration (long persistent AF,>1 year after the initial diagnosis), severe left ventricular systolic dysfunction (EF<30 per cent), increased left atrial size (diameter >5 cm), and the presence of comorbidities (obesity, hypertension, untreated valvular disease, metabolic syndrome, obstructive sleep apnoea, kidney disease) are the main factors predicting a high recurrence rate of atrial arrhythmias post-ablation. However, none of the above factors is an absolute contraindication to CA. Only in the presence of left atrial thrombus is the procedure contraindicated.

Based on the above, the ideal candidate for CA would be the relatively young patient with several symptomatic episodes of paroxysmal AF of recent onset (<1 year) and without comorbidities or signs of structural remodelling of the heart (normal LVEF, no or minimal atrial enlargement). Although the majority of AF patients undergoing ablation in everyday clinical practice do not fulfil all these criteria, most of them still experience a beneficial effect. New technologies are underway intending to improve the effectiveness and safety of CA and to increase the success rate even for AF patients who are currently considered poor candidates for this treatment strategy.

Early referral of ideal candidate for AF ablation is much appreciated as it would be associated with better outcome at long term. Transition from paroxysmal to non-paroxysmal AF (or from subclinical to clinical AF) is often characterised by advancing atrial structural/electrical remodelling or worsening of atrial cardiomyopathy which are associated with more late AF recurrence rate after PVI. At 10 years of follow up >50 per cent of paroxysmal AF might progress to persistent AF. Risk factors for AF progression include age, heart failure, hypertension, chronic kidney impairment, chronic pulmonary diseases, diabetes mellitus, previous stroke, and left atrial remodelling. 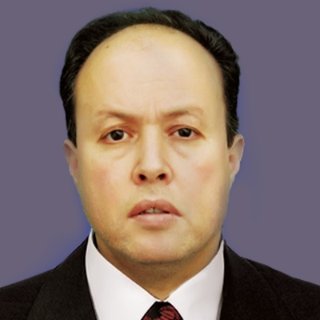 Rami Riziq Yousef Abumuaileq is a Consultant Cardiologist (M.D., Ph.D.) at Palestinian Medical Services- Gaza- Palestine. He has an appreciated record as expert/referee of cardiovascular disease and research. Currently, he is Associate Editor at European Heart Journal, Editor at BioMed Central, a Journal Referee for American Journal of Cardiology and a Member of the Clinical Case Review Committee at the prestigious ESC Congress 2020, 2021 and 2022. He had completed his Medical Doctorate of Cardiology with advanced fellowship at Cardiology Department of the Tertiary University Hospital of Santiago de Compostela-Spain.