OBESITY is a DISEASE

Obesity is a global epidemic in all age groups and in both developed as well as developing countries. In 1995, there were an estimated 200 million obese adults worldwide. In developing countries, it is estimated that over 115 million people suffer from obesity-related problems. A rapid increase in childhood obesity has also been reported.

The conventional Biostatistical Theory of Disease (BST) states that a disease is a type of internal state of the organism which, (i) interferes with the performance of some natural function — i.e. some species-typical contribution to survival and reproduction — characteristic of the organism’s age; and (ii) is not simply in the nature of the species, i.e., is either atypical of the species or, if typical, mainly due to environmental causes’’.

It is not clear that obesity is a disease according to BST. First, obesity is not a ‘‘type of internal state.’’ Obesity may of course be characterised by excessive amount of fat, fat cell influence (adipokines), or insulin resistance, but is primarily measured, categorised, and referred to by external factors or indexes, such as BMI.

Obesity as a medical problem or a social or cultural phenomenon appears to be a relevant and crucial question with vast implications for health policy and health care. Despite pragmatic arguments for designating obesity as a disease from professionals involved in treatment of obesity, patient organisations, and from health policy makers, it is still an open question whether obesity is a disease.

Obesity is a complex disorder and a major health risk factor linked to cardiovascular disease, stroke, cancer, hypertension, diabetes, and mortality. Large scale developmental activities and urbanisation in India have brought significant changes in lifestyle and dietary habits in the growing population. According to a World Health Organization (WHO) survey, worldwide obesity has doubled since 1980. The studies reveal obesity is killing three times as many as malnutrition. Obesity is a global burden on society which has a potential to destroy Nations medically and economically. The prevalence of both type 2 diabetes and obesity has globally increased and attributed to adoption of sedentary lifestyle and dissemination of the western diet. Diabetes is also complex. No one knows this better than the physician managing this entity of myriad presentations. It is also well known that despite best efforts by the treating doctors, a large segment of this population struggles to bring the disease under control.

There are several lines of evidence that inflammation of fat directly causes obesity and diabetes. Inflammation begins in the fat cells themselves. Fat cells are the first to be affected by the development of obesity. As fat mass expands, inflammation increases. Diabesity causes inflammation. Insulin and leptin resistance impair glucose metabolism. When fat cells become insensitive to insulin, they can’t store any more glucose and hyperglycemia results. Dr. Francine Kaufman coined the term diabesity (diabetes + obesity) to describe them. Diabesity can be defined as a metabolic dysfunction that ranges from mild blood sugar imbalance to full-fledged type 2 diabetes.

Diabesity is a constellation of signs that includes:

There is no doubt that there is direct co- relation between diabetes and obesity and the more severe the obesity, the more stubborn will be the diabetes management for treating diabetes associated with obesity.

Weight gain appears unavoidable when patients with type 2 diabetes are commenced on insulin. Body weight increases by 2 Kg for each percentage point decrease in HbA1C during the first year. Gain in weight mainly represents an increase in fat mass, which enhances insulin resistance and increases the risk of obesity related complications.

There is enormous scientific evidence that weight loss inevitably helps in resolving this condition. If one needs to lose 10-20 kgs, it can be done by healthy diet and lifestyle changes, however, if one needs to lose more than this, surgical intervention must be considered

• Depression
• Insomnia
• Self hate and feeling of guilt
• Neurotic disorders

Evolution of Obesity as a Disease

The Recognition of Obesity as a Disease

Disease has been defined in many numerous ways. The American Medical Association House of Delegates 2013 have defined obesity as a disease considering the following criteria: an impairment of the normal functioning of some aspect of the body, characteristic signs or symptoms, and harm or morbidity.

Obesity is caused by an imbalance between energy intake and energy expenditure which leads to increased body fat. However, it does not account for the complex role between the Central Nervous System (CNS) and metabolically active organ systems. There is a derangement of appetite modulation with ghrelin, leptin, insulin, and peptide YY may in the obese state causing it difficult to achieve sustained weight loss.

Labelling obesity as a disease holds great potential for reducing the stigma associated with obesity. Studies have reported that a model emphasising factors such as unhealthy eating or sedentary behaviour increases level of stigma toward obese people. Cataloging obesity as a disease will help reduce the weight bias and emphasise that obesity is not just a lifestyle issue but a disease process that requires both medical and behavioural treatment. The survey has presented obese individuals as physically dependent on food and reduced blame toward obese people. 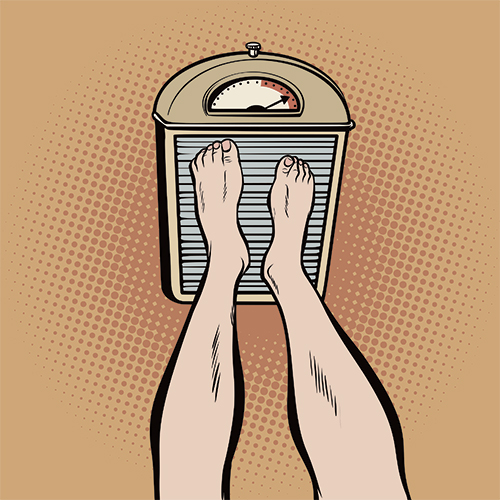 The Fat but Fit Hypothesis

In 2012, the AMA Council of Science and Public Health stated that obesity should not be classified as a disease. The evidence of few obese individuals not exhibiting metabolic abnormalities, such as insulin resistance, and may be considered otherwise healthy. Pooled data of eight longitudinal studies with 10-years of follow up, comprising 61,386 subjects, showed a 24 per cent increase in cardiovascular disease in the metabolically healthy obese group. Similarly, the metabolically unhealthy obese groups displayed a two- to three-fold increase in cardiovascular disease. However, this significant increase in cardiovascular events noted in the otherwise healthy obese group compared to non-obese metabolically healthy individuals have made the authors to conclude “there is no healthy pattern of increased weight.” Similar results have been noted in the Edmonton obesity staging system.

The Issue Against Obesity as a Disease

Those who argue the classification of obesity as a disease stated it does not meet established criteria of disease. Experts contemplate, changing its designation would be expensive and would sequester funding from the medical treatment and research of other important conditions. Few opponents of the disease argue that public opinion holds obesity as a lifestyle decision. Obesity is considered to be selfimposed, it’s a lifestyle choice and a risk factor for a disease and not a disease.

“Medicalising” is one of the argument for not characterising obesity as a disease. Medicalising is an act of being dependent on clinical treatment, such as medications or surgery, in lieu of lifestyle changes. Moreover, few oppose saying patients do not deserve treatment due to their behaviour related issues, habit of excessive, compulsive eating with lack of discipline in themselves. However, availability of effective treatments should not precondition obesity to be considered as a disease

The Global Challenge for Obesity

The global switch from diseases of nutritional deficiency to conditions of over nutrition has occurred, and continues to occur over a remarkably short time span. Not only does this provide a great challenge relative to diabetes risk but also for a large variety of pathologies. The availability of the mass media and web networking has tremendously enhanced global communication to spread the awareness regarding the deleterious effects of obesity.

Nevertheless, it remains a global challenge to imagine how to get a significant number of individuals in first and second world countries to alter their lifestyle in terms of reducing caloric intake, as well as increasing physical activity. There are a variety of interventions that have involved local or federal regulations (nutritional labelling, calorie labelling, taxing the soda, etc.) or incentivising healthy eating and exercising (insurance companies or employers can reward individuals that maintain a healthy body weight or exercise regularly).

The impact of this modern day epidemic can be felt today. Our current treatment options and preventive measures, while helpful, have only a minor influence on individual patients. The high risk of associated medical conditions, the clear recognition of a need to treat, as well as the drastic changes in an individual’s physiology of energy metabolism are strong arguments to classify obesity as a disease. Benefits of this classification would emphasise the urgency to eradicate this modern epidemic. For an individual obese patient, labelling this condition as a disease will ensure access to treatment. For the population as a whole, designating obesity as a disease will increase awareness, potentially drive policy development, and dedicate resources for further research and preventative measures.

Acknowledgement:
I would like to acknowledge our Medical Writer Dr Rajesh Sardana in helping me compile the content for this article.