Understanding and Predicting Progression to Hepatorenal Syndrome in Cirrhotic Patients

Hepatorenal syndrome is a severe complication in cirrhotic patients associated with high mortality. Diagnosis of difficult and often delayed due to diagnostic criteria. Understanding the pathophysiology, predictors, and precipitators of hepatorenal syndrome can aid clinicians in making the diagnosis and early initiation of therapy.. 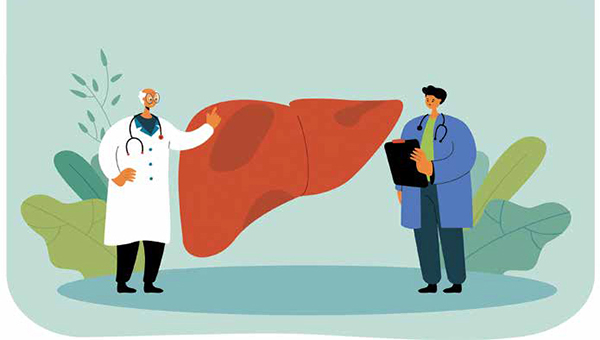 Patients with liver cirrhosis often present with acute kidney injury (AKI) which is a cause of high morbidity and mortality. Cirrhotic patients are at an increased risk of intravascular volume depletion secondary to certain medications (such as diuretics or lactulose, which are commonly used in this population), gastrointestinal bleeding and decreased effective arterial blood volume secondary to splanchnic vasodilation, all of which result in decreased renal perfusion and renal injury.

Based on the current International Club of Ascites (ICA), the previously known HRS- type 1 has been renamed HRS-AKI and diagnosis requires AKI based on the current KDIGO guidelines in the presence of cirrhosis and ascites, 48 hours or appropriate resuscitation, diuretic withdrawal, and exclusion of other causes of AKI.

Establishing predictors for development of HRS in cirrhotic patients with AKI could aid clinicians in establishing a diagnosis of HRS sooner rather than later and allow them to initiate goal-directed management. Some studies have attempted to describe predictors of HRS in this population of patients, however many of these studies have been limited by small sample sizes and poor generalizability. Additionally, the definition and diagnostic criteria of HRS has evolved over the years, necessitating the reevaluation of older studies in the field. 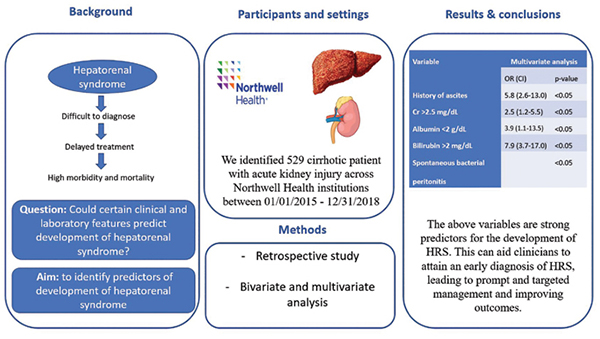 A recent retrospective case-control study conducted by Sasso et al. evaluated 529 cirrhotic patients admitted with AKI across multiple Northwell-health hospital sites in New York City. The primary outcome was development of HRS-AKI during hospital stay. Patient variables including demographics, past medical history, laboratory data, medication history and hospital complications were evaluated to determine predictors of the development of HRS-AKI in this cohort of patients.

This study compared outcomes of patients who developed HRS-AKI to those who did not and found that those who did develop HRS-AKI were more likely to have a history of alcoholic cirrhosis, evidence of portal hypertension and large volume ascites, a diagnosis of spontaneous bacterial peritonitis, lower sodium levels and platelet count as well as higher bilirubin, creatinine and INR levels. Mortality was also higher in patients who developed HRS-AKI compared to those who did not.

This study found that a history of ascites, baseline serum creatinine>2.5 mg/dL, albumin<2g/dL, bilirubin>2 mg/dL and spontaneous bacterial peritonitis to be independent predictors or progression to HRS-AKI (Figure 1).

Treatment of HRS-AKI is challenging and restoration of baseline kidney and liver function is rare. Treatment is usually directed towards avoiding irreversible renal injury by increasing effective intravascular volume and renal perfusion.

Albumin infusions for volume expansion is often used to prevent worsening of kidney dysfunction at the earlier stages of AKI in attempt to prevent progression to HRS-AKI. Albumin might also provide some antiinflammatory benefits. Pentoxifylline has also been evaluated as a possible agent in the prevention of progression to HRS-AKI, however further studies are needed to determine efficiency.

Vasoconstrictor therapy increases renal perfusion and is the main approach to treatment in HRS-AKI. Terlipressin, a synthetic vasopressin analogue is available in Europe, Australia, New Zealand and parts of Asia and is the firstline treatment option for patients with HRS-AKI. Clinical trials have shown improved kidney function and patient survival with the use of Terlipressin and even better outcomes with the combined use of Terlipressin and albumin. Other vasopressor therapies such as Norepinephrine have been used for treatment of HRS-AKI with some studies showing equal efficacy 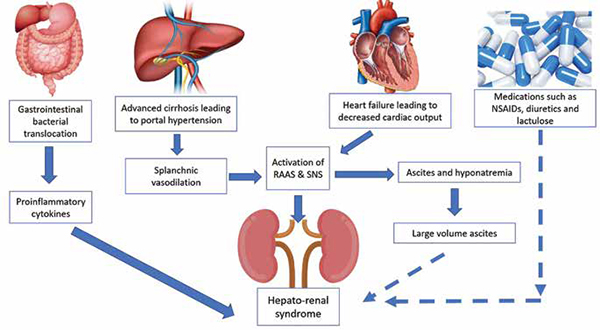 In countries where Terlipressin is not available, the combination of midodrine and octreotide is often used, however, convincing data on the efficiency of this combination is lacking.

Other treatment options include hemodialysis and transjugular intrahepatic portosystemic shunt (TIPS). Hemodialysis is often used as a bridge to liver transplant or for patients with no evidence of improvement in renal function who are not eligible for liver transplantation. TIPS results is shunting of blood from the portal vein to the hepatic vein, essential decreasing portal pressures which can lead to improvement in renal function. While some studies suggest that TIPS might be an effective method of improving renal function, is it often not feasible in patients with high MELD scores (as is the case for many patients with HRS-AKI) given the high risk of hepatic encephalopathy.

Liver transplant is the only definitive and most effective treatment option for HRS-AKI, resulting in restoration of kidney function in up to 80 per cent of patients. However, at the time of diagnosis of HRS-AKI, patients are often poor candidates for transplantation based on MELD scores.

Understanding the pathophysiology and precipitating factors for development of HRS-AKI is critical. In the setting of high portal pressures (often seen in decompensated cirrhotic patients), the renal vasculature eventually becomes vasoconstricted in response to splanchnic vasodilation and activation of the renin-angiotensin-aldosterone system. This results in a reduction of glomerular filtration and retention of sodium and water. Additionally, systemic inflammation as a result of bacterial infections has been suggested to play a role in the progression of HRS-AKI (figure 2).

Furthermore, several clinical conditions have been linked to the development of HRS-AKI. Worsening ascites can cause elevated intra-abdominal pressures leading to compression of the renal vasculature and worsening kidney dysfunction. Some studies have demonstrated that large volume paracentesis may be associated with HRS-AKI secondary to intravascular fluid shifts and potentiation of the renin-angiotensin-aldosterone system. Spontaneous bacterial peritonitis results in a hyperinflammatory state that has been suggested to precipitate HRS-AKI and cardiogenic shock results in decreased effective intravascular volume, contributing to renal dysfunction. Additionally, certain medications such as diuretics, non-steroidal anti-inflammatory drugs and lactulose may contribute to HRS-AKI (figure 2).

By understanding the pathophysiology of HRS-AKI and integrating the clinical conditions associated with HRS-AKI and the established evidence-based predictors of progression to HRS-AKI, clinicians can stratify cirrhotic patients into high risk or low risk for HRS-AKI allowing for earlier diagnosis and management of this high mortality condition. 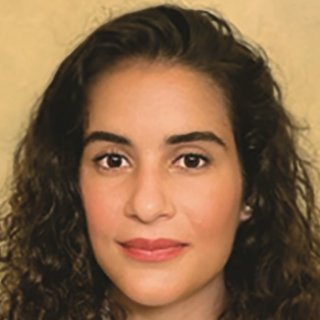 Sasso is a medical resident at Northwell health. After completing medical school, she pursued two years of post-doctoral fellowship at the department of Hepatology at the Medical University of South Carolina. Her research interest focus on complications of portal hypertension. Sasso is going to start her gastroenterology and hepatology fellowship at the University of New Mexico