Minimal access surgery has come as a boon for bariatric surgery.

Minimal access technology is a giant leap forward in delivering surgical care to patients. The underlying principle of minimizing the trauma of surgical access met with such wide spread acceptance that there was an uncontrolled and unmonitored surge in its practice and application. This resulted in accidents, which nearly put this technique to disrepute. However, increasing experience and dedication of surgeons firmly believing in the technology’s principle helped minimal access surgery achieve the status it enjoys today.

There is no surgical speciality (belying obstetrics) where minimal access surgery has not made inroads. One such surgical speciality where minimal access surgery has come as a boon is bariatric surgery. Bariatric surgery deals with surgical management of patients suffering from an extreme degree of obesity. An obesity which has crossed the boundary of being a mere cosmetic problem to a life threatening disease. This disease is termed as morbid obesity and is defined as a patient with a BMI (body mass index) of > 40 Kg/m2 (Asians > 37.5 Kg/m2) or 35 Kg/m2 (Asians 32.5 Kg/m2) with significant associated obesity related comorbidities. The disease has developed stealthily and has been declared the worst pandemic of the 21st century.

The world health organization in conjunction with the Regional Office for Western Pacific (WPRO), International Association for the study of obesity and the International Obesity task force have formulated an extremely well researched and crisp perspective of obesity in the Asia Pacific region. Extensive recommendations are detailed on medical management of obesity. The perspective documented in February 2000 makes a reference to the role of bariatric surgery in the management of obesity in the Asia Pacific region. Bariatric surgery in fact is the only treatment option which has reported effective, consistent and sustained prophylaxis and improvement of obesity related complications.

The data on obesity from the Asia pacific region brings to light certain differences in behavior patterns of obese individuals here as compared to that observed in the west.

This is a purely restrictive procedure in which an adjustable silicon band is placed on the stomach just below the gastroesophageal junction to create a 15cc pouch. The balloon lining the band is connected by a hollow tube tunneled through the abdominal wall to a small reservoir known as access port which is placed subcutaneously and fixed to the muscle sheath in the epigastrium or left hypochondrium. By injecting saline into this reservoir, the balloon lining the band can be inflated to narrow the passage between the gastric pouch and remaining stomach. The procedure of gastric banding works on a simple principle of decreasing the intake capacity of the patient and slowing the rate of emptying the gastric pouch to prolong the time interval between meals. As the entire digestive tract is intact in this procedure, digestion and absorption is normal. Success therefore relies significantly on the patients motivation level and adherence to dietary guidelines. The weight loss in various reported series ranges between 40-60% EWL by end of five years.

Complications associated with LAGB include gastric perforation, access port infection, access port leak, outlet obstruction, pouch dilatation, band slippage / erosion. The overall incidence of these complications is 3-5%. A significant advantage of this procedure is its reversibility. It is a simple and safe procedure which is rapidly gaining popularity the world over.

The gastric bypass is considered the gold standard in treating morbid obesity. The procedure is performed both laparosocpically and by conventional open access.

The procedure involves division of the stomach using staples to create a 15-20cc gastric pouch. A 100-150 cm roux-en-y jejunal loop is created using staples. The jejunum is anastomosed to the gastric pouch creating a 1.2 – 1.5 cm wide anastomosis. This gastrojejunostomy may be performed using a circular stapler / linear staples or intra corporeal suturing.

The principle underlying gastric bypass has a combination of restriction and malabsorption. The small size of the gastric pouch restricts the intake, the narrow outlet delays the emptying and delayed mixing of digestive juices and food consumed decreases absorption.

The weight loss varies from 50-70% EWL at five years following surgery. Complications of gastric bypass occur in 7-10% of patients. Morbidity and mortality are both higher as compared to LAGB. This is directly related to the multiple anastomosis required in performing the gastric bypass. Complication include anastomotic leak, haemorrhage, stricture, DVT, PE and dumping syndrome. The latter occurs due to concentrated food rapidly reaching the small gut causing nausea, vomiting, palpitation, dizziness and diarrhea. This unpleasant event usually results in the patient abstaining from foods which may cause this to happen. 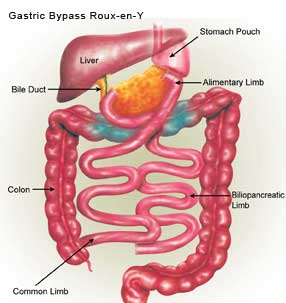 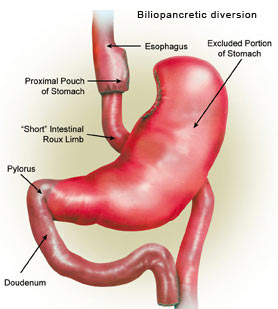 Patients of morbid obesity have been effectively treated by bariatric surgery and life style management in the west for the past 50 years. Open bariatric surgery on these patients with a high surgical risk is associated with significant perioperative morbidity and a prolonged convalescence. Technical difficulties include an incision through an anterior abdominal wall, of increased thickness working in a depth with difficulty in accessing areas like the oesophageal hiatus, bulky and heavy intra-abdominal contents, abdominal wall closure, delayed ambulation due to surgical incision with increased risk of DVT and pulmonary embolism. All complications related to an open incision such as wound dehiscence, incisional hernias, hypertrophic scars etc. An event such as post-operative bleeding or bowel leak requiring re-exploration have a very high incidence of morbidity and mortality.

Introduction of minimal access surgery has significantly shortened convalescence and perioperative morbidity. The laparoscope is able to access and provide excellent vision of nearly the entire abdominal cavity. Appropriate placement of trocars makes handling of entire GI tract comfortable. The puncture wounds made by the trocars do not require a layered closure. The post operative pain is significantly decreased and majority of patients are ambulatory in the post-operative period. This results in rapid recovery of the patient.

Any surgeon performing bariatric procedures must be well versed with diagnosis and management of complications of these procedures. Surgeons should possess appropriate and adequate surgical expertise and technical skill to perform the procedure by laparoscopic and open approach.

Bariatric surgery in India is at an infancy stage. Patients of morbid obesity require to be managed by a multidisciplinary team comprising the surgeon at the helm with help from, physician, nutritionists, physiotherapists, psychologists and counselors. Protocol based management provides for safe surgery and yields the best results. Bariatric surgery is slowly growing popular in India. The technology of minimal surgery has made this surgical option for treating obesity more acceptable.