The FiberNet device is the first embolic protection device, which combines features of a filter, and an occlusion device in one system to overcome the complications of carotid angioplasty like distal embolisation of debris. 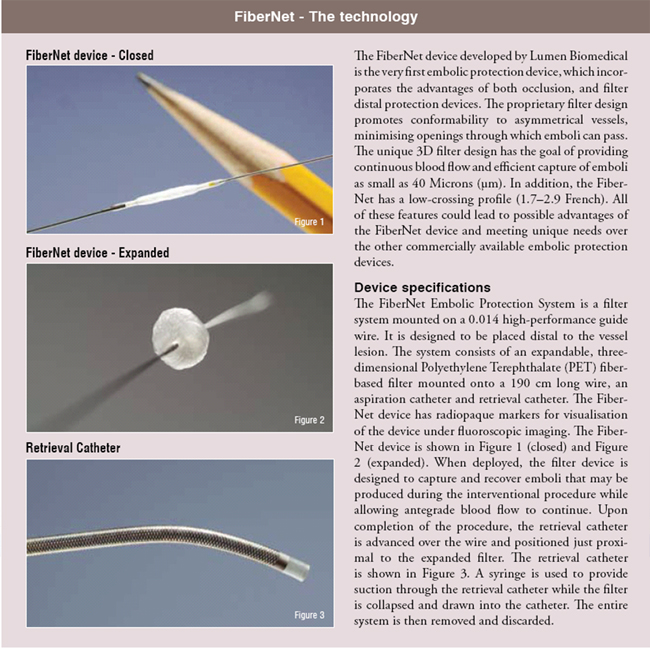 The first-in-man trial was reported by M. Henry et al. in June 2007 . Since then, 35 high-grade lesions of the internal carotid artery have been treated in 34 patients by stent implantation under embolic protection with the new FiberNet device. Mean patient age was 71.4 ± 8.8 years (range 50-85 years). 67.6 per cent were male. 29.4 per cent of the lesions were symptomatic.

The procedure was technically successful in 34 / 35 (97 per cent) interventions. There was no stroke or death within 30 days. Two permanent amaurosis and one amaurosis fugax occurred. Visible debris was captured in all cases. No changes were noted in CT/MRI during 30 days post-procedure. The mean surface area of debris caught was 63.8 mm² (range 37.7-107.5mm²).

Primary endpoint for this study was defined as all death and stroke within 30 days post-procedure. Secondary end points included:

In addition to the feasibility study, plaque debris was collected during randomly selected carotid stenting procedures in which the FiberNet device and other CE marked embolic protection devices were used. Visible debris was captured in all cases. The debris was classified for quantity, analysed histologically and differentiated into atheromatous plaque, cholesterol crystals or macrophage foam cells. Data evaluation is still pending. But, our experience shows that the average mean debris surface area captured with use of the FiberNet device or with proximal occlusion devices was larger than with the use of existing competitive filter devices.

This is a multi-center prospective study designed to demonstrate the performance and safety of the FiberNet Embolic Protection System when used as an adjunctive device during Saphenous Vein Graft (SVG) intervention. This study will enroll up to 30 participants in up to 10 centres in the United States and Europe. The lesion must be located within the SVG and must be =50 per cent and <100 per cent stenosed. The patient may have one or two SVG grafts to be treated and each SVG may have more than one lesion. The primary objective of the study is to evaluate the safety and performance of the FiberNet Embolic Protection System during SVG interventions. The primary endpoint is Major Adverse Cardiac Events (MACE) rate during 30 days post-procedure. The secondary study objectives are endpoints related to the use of the FiberNet system and additional safety endpoints.

Horst Sievert is the Director of the CardioVascular Center Frankfurt, Sankt Katharinen, and the Department of Internal Medicine, Cardiology and Vascular Medicine of the Sankt Katharinen Hospital in Frankfurt, Germany and Director of the Catheterization Lab for Peripheral Vascular Laboratory / Structural Heart Defects. He is also an Associate Professor of Internal Medicine/Cardiology at the University of Frankfurt.

Jennifer Franke is a fellow in cardiology, angiology and intensive care medicine at the Sankt Katharinen Hospital in Frankfurt, Germany. She has been the study coordinator of over 20 clinical trials at the Cardiovascular Center Frankfurt under the direction of Horst Sievert, the scientific secretary of the International Course on Carotid Angioplasty (ICCA).