A substantial group of patients who consult the emergency hospital departments or outpatient clinics have indications for oral anticoagulation(e.g. atrial fibrillation, deep venous thrombosis, pulmonary embolism, etc.). Poor anticoagulation control, major intra or extra cranial bleeding, recurrent thromboembolic events are the major concerns physicians have with oral anticoagulants. Currently, there are clinical risk assessment tools which have been recently validated or recommended by the international guidelines and could be simply used for achieving better outcome and optimal use of oral anticoagulants.

Venous Thrombosis(VT), comprising  Deep Vein Thrombosis (DVT) and Pulmonary Embolism (PE), has an incidence of approximately 1 per 1000 annually in adult populations. The risk of recurrence is high. Oral anticoagulants (OACs) play a vital role in the secondary prevention of VT in such patients.

The prevalence of Atrial Fibrillation(AF) is more than double that reported just one decade earlier, now its prevalence is estimated to be about 2 per cent in the general adult population. It is well known that patients with AF have five fold risk of developing ischemic stroke compared to others. OACs represent the cornerstone therapy in the primary and secondary prevention of ischemic stroke in AF patients. Compared with control or placebo, OACs therapy reduces stroke risk in AF patients by 64 per cent and mortality by 26 per cent.

Despite the clear benefits of OACs in AF patients and patients with VT. Recent studies had demonstrated the underuse of OACs. In the EORP-AF (EURObservational ResearchProgramme-Atrial Fibrillation) general registry of 9 developed European countries, only 81per cent of high stroke risk patients were on OACs. Although presents worldwide, the underuse of OACs founds to be most prominent in the developing countries. Data from existing literatures show: The estimated rates of OACs use were low; <58 % in Brazil,<50% in China, <44% in Pakistan, 16% in Malaysia. The GulfSAFE (Gulf Survey of Atrial Fibrillation Events) registryhad demonstrated low rates of anticoagulation use ( prescribed to only 49 per cent of patients who need OACs) in 6 Gulf countries (Bahrain, Kuwait, Oman, Qatar,United Arab Emirates, and Yemen).(1)

Risk of major bleeding with OACs therapy might be among the important reasons of why many physicians are still reluctant to prescribe OACs.

The most serious complications of OACs are Intracranial Haemorrhage (ICH) and fatal bleeding with incidence ranges from 0.3% to 1.8% and from 0.5% to 1.0%, respectively. This risk reflects the importance of delicate balance and proper decision making.

For proper control of OACs:

Poor quality control of oral anticoagulation is the most important risk factor for bleeding and ICH.

VKAs are still commonly used and are the main stay OACs therapy in many developing countries where the patients cannot buy the NOACs or the health insurance does not cover NOACs.

To achieve the optimal balance between thrombotic risk with low International Normalised Ratios (INRs) and an increasing bleeding risk with high INRs, the INRs need to be in the optimal range of 2-3 for the prevention of stroke and VT in patients with AF or DVT on VKAs.

The quality control of VKAs could be measured by the Time in Therapeutic Range (TTR) or simply by the Proportion of INR in Range (PINRR). Both methods have a significant correlation (r = 0.99, p = 0.001).The PINRR method utilises the number of INRs within the target range (e.g. INRbetween 2 and 3) divided by the overall number of INRs during that selected time interval.

A meta-analysis of four landmark NOAC trials in AF revealed a significant 19per cent stroke risk reduction versus VKAs, which was driven by the reduction in ICH.  At high TTR or PINRR of >70 %, VKAs might have similar efficacy and safety as NOACs. Despite more than fifty years of clinical experience, the maintenance of stable INR in patients using VKAs remains a challenging task.

Physicians are highly appreciating the introduction of reasonable clinical tools which could refine their judgement and help the decision making process.

The clinical risk assessment tool should be a user friendly tool (i.e., simple and practical).

SAMeTT2R2 score has been validated in external cohorts and has been described in the recent guidelines as a clinical tool to facilitate decision making in regard to OACs.(2) 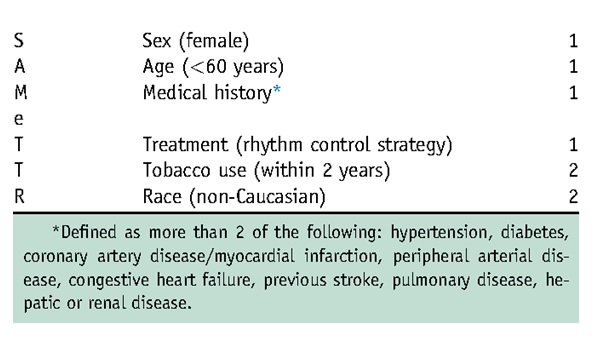 With increasing prevalence of patients who need OACs or who are already are OACs, physicians should be aware and oriented about proper estimation of bleeding risk with OACs.

The absolute and clear contraindications to OACs might be few and could be summarised in:
1-    Active serious bleeding (where the cause is unknown).
2-    Severe thrombocytopenia <50 platelets × 109/L.
3-    Severe anaemia which is still under diagnostic work up.
4-    A recent high-risk bleeding event such as Intracranial Haemorrhage (ICH).

For those who do not have absolute contraindications, they might still have some risk of developing bleeding event while on OACs.

In this regard, several bleeding risk assessment tools have been validated, among which HAS-BLED score has shown strong predictability of major bleeding event in the different studies conducted on AF patients and in several large cohorts of DVT or PE patients.

HASBLED which has been described in the recent guidelines could represent a simple and practical tool. According to HASBLED, patients with score >3 might have high bleeding risk with OACs. 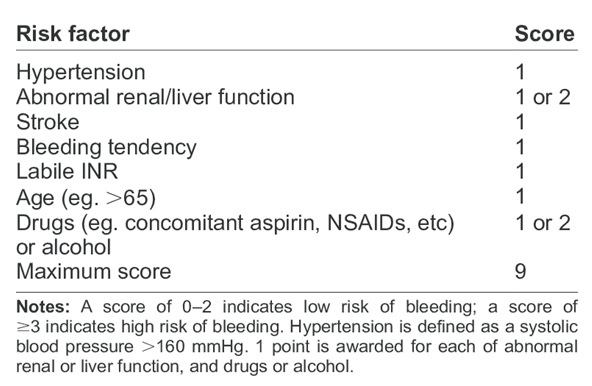 Physicians should remember that Bleeding risk is dynamic, and for each patient reassessment of bleeding risk profile is recommended at least annually.

Useful points to remember when dealing with OACs in patients with AF or VT:

Although NOACs (dabigatran, rivaroxaban, apixaban or edoxaban) are preferred over VKAs for patients with DVT/PE and for patients with AF without mechanical prosthetic valve or rheumatic mitral stenosis. VKAs are still the commonly used OACs, particularly in the developing countries where the health insurance does not cover NOACs or the majority of patients have low income and cannot buy NOACs.

1-    For patients who are recently on VKA (e.g., warfarin), assess the risk of poor quality of anticoagulation using SAMeTT2R2. For those with score >2, greater efforts to improve TTR, such as more regular visits, education/counselling, and frequent INR monitoring are needed or the use of a NOAC should be reconsidered.
2-    If NOACs are considered. Choose the best NOAC which suits the patient’s history, age, renal and kidney functions.
3-    Anticoagulation card that describes the anticoagulation therapy to be kept with the patient.
4-    More frequent follow up visits for patients with high bleeding risk and associated multi-comorbidities. At least one month after initiation of OACs and every three months later on with continuous efforts for proper management of associated morbidities.
5-    Ensure the patient proper adherence and alert should be maintained of the possible drug-drug interaction with OACs during the follow up visits.
6-    Values of complete blood counts-platelets, renal and liver functions should be registered at base line and during follow up (i.e., at least every 6-12 months).
7-    Patients are better to be involved in the decision making process.
8-    For patients with severe complex illness (e.g., recent cancer, ICH, blood dyscrasia, dementia, frequent falls or severe liver/kidney disease etc…), multidisciplinary team better to be consulted (e.g., knowledgeable cardiologist, haematologist, neurologist etc…).