Person-Centered Healthcare: How to Practice and Teach PCH 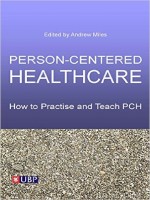 Despite exponential increases in biomedical and technological advance over the 100 years that have radically transformed the scope, possibility and power of clinical practice, there is a growing and pervasive sense of unease within international medicine that all is not entirely well, leading to claims that medicine has entered a time of significant crisis - a crisis of knowledge, care, compassion and costs.

As medicine has become more powerfully scientific, it has also become increasingly de-personalized, so that in some areas of clinical practice an over-reliance on science in the care of patients has led to the substitution of scientific medicine with scientistic medicine and an accompanying collapse of humanistic values in the profession and practice of medicine. Since medicine has the unalterable imperative to care, comfort and console as well as to ameliorate, attenuate and cure, the perpetuation of a modern myth in medicine - that now that we can cure we have no more responsibility to care - risks the creation of an ethical and moral chaos within clinical practice and the generation of negative outcomes for both patients and clinicians alike.

Observations of a ‘de-coupling’ of medicine’s so-called art and science base date from the late eighteenth century and have continued throughout the nineteenth century as part of the ‘patient as a person’ movement. Recently, medicine has witnessed the emergence of the separate evidence-based medicine (EBM) and patient-centered care (PCC) movements, two initiatives that have developed in parallel but which have rarely entered into intellectual and clinical exchange, leading to fears that now, when it is so important for them to coalesce, they are poised to collide.