Medical devices and their components are currently being scaled down to molecular levels and successfully applied in diagnostics and clinical therapies.

Many of us might know Isaac Asimov´s science fiction novel “Fantastic voyage” from 1965. Here, a submarine has been scaled down to the size of a microbe and including a miniaturised crew, has been injected into the blood stream of a scientist. These scientists were able to successfully remove a blood clot in the brain of a famous physicist, and by this, guarantee his survival. During the days when Asimov wrote his novel, Richard Feynman, the famous physicist and Nobel laureate further stated: “There is plenty of room at the bottom!” Feynman believed that new and yet unpredictable material properties on the level of atoms and molecules should be explored and exploited for research and device application.

In the 60s of the last century, both, the novelist and the physicist, would have never dreamt that part of their fantasy and expectations would have partially come true. Medical devices and their components are currently being scaled down to molecular levels and successfully applied in diagnostics and clinical therapies. Atoms and molecules are typically measured in nanometers, i.e. in a scale of 10-9 meters. Nanoobjects as compared to other objects of the living world are shown in figure 1. Nanoscale indeed refers to biological dimensions and should, thus, be ideal for application to medical devices. 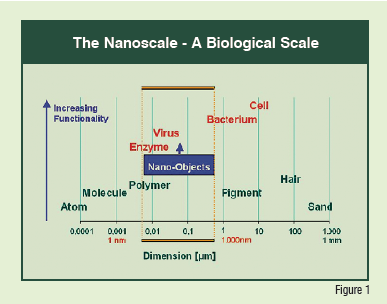 Following developments of the electronics industry in miniaturising devices such as electric circuits etc., it is not a surprise that other areas of technology would follow. The number of scientific publications on nanotechnology and its applications in life sciences is rising exponentially. Consequently, governmental institutions and private equity companies are investing in research and development of nanoproducts for application in construction, biotechnology and medical devices. Expectations for a turnover in nanotechnology in the year 2015 count on US$ 15 billion worldwide. Is this hype justified and where are the most active groups working on nanotechnology? Figures on the number of patents applied may provide the first answer to this question: Following an analysis of Ernst & Young from 2007, about 5,340 patents have been granted till 2004 in the USA, 2,559 in Europe and 1,220 in Asia. Countries leading in nanotechnology in Asia are Korea and Japan. We can assume that the number of granted patents in nanotechnology will further increase and more and more areas, such as construction, biotechnology and life sciences will profit from developments in this field. Further, most of the innovative companies dealing with R&D in nanotechnology are small and middle-sized enterprises with less than 30 employees. This implies a permanent need for financial support, investments and continuous patenting.

“NanoScience is the study of phenomena and manipulation of materials at atomic, molecular and macromolecular scale, where properties differ significantly from those of larger scales.” …and… “Nanotechnology is the design, characterisation and application of structures, devices and systems by controlling shape and size at the nanometer scale!” defines the Royal Academy of Engineering in London in 2004.

Applications in drug delivery (>50%), in vitro and in vivo diagnostics (>25%) and implant technology (>20%) are currently the preferred and successful realms of nanotechnology application. What are the tools and structures used in nanotechnology for the application in life sciences or in medical device technology? Regularly shaped cages, which are made up of a network of hexagonally and pentagonally arranged carbon atoms may serve as tiny reservoirs for drugs. They are named after its discoverer Richard Fuller as Fulleren Cages. Liposomes or other polymeric micelles are used as drug transporters once they have been modified with specific ligands. Conjugated ligands modify the surface of such nanocarriers in such a way that they are able to pass the blood-brain barrier and thus, deliver drugs to the tumour targets hidden behind this barrier1. Oligonucleotide modified gold nanoparticles can be used for intracellular gene regulation2. These particles are less susceptible to degradation by cellular enzymes and exhibit greater than 99% cellular uptake and were, at least under the conditions studied, non-toxic to the cells.

Further application stems from nanofibres obtained through electrospinning. These fibres may serve as stable or biodegradable scaffolds in bioreactors, as reinforcing structures for blood vessels, biodegradable compounds for wound healing or as a coverage for otherwise bioincompatible materials such as stainless steel for drug-eluting stents.

Nanotechnology also offers promising tools for surface modification of biomaterials through coating with nanoparticles and thus achieving an optimal blood and cell-compatibility. Such biomaterials are currently used in procedures, such as hip implants or bioartificial blood vessels. Extracorporeally applied medical devices, such as membranes for hemodialysis or tubing systems for drug delivery, also profit from this kind of surface modification. A controlled attachment of nanoparticles with defined chemical properties may be used for the analysis of optimal structures to either repel bacterial cells or promote protein absorption and thus help the bioengineer to identify the most promising biomaterials3. Quantum dots are a novel class of inorganic fluorophores which are gaining widespread recognition because of their exceptional photophysical properties. They are nanometer-scale semiconductor crystals which are engineered to emit light at a variety of precise wavelenghts from ultraviolet to infrared. The narrow emission and broad adsorption spectra of these dots makes them well suited to multiplexed imaging, in which multiple colours and intensities are combined to encode genes, proteins and small-molecule libraries4. They are ideal tools for future tumour diagnostics, drug delivery systems or body-imaging processes. Figure 2 provides an overview of possible applications of nanotechnology in life sciences. 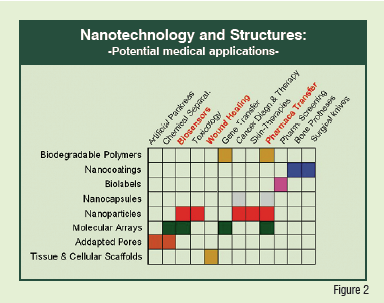 The interested reader is already convinced about the advantages of nantechnology application in medical device technology outlined here by only a few examples. However, questions may still arise regarding the possible pitfalls of these highly promising applications? Nanosized particles may give rise to cellular uptake or at least interaction with cellular structures in the body5. They may act as catalysts or nuclei for the induction of protein fibrillation and thus increase the risk for toxic clusters, e.g. in amyloid formation6. Nanoscale surfaces can act as platforms for protein association, but depending on its chemical composition, may also prevent fibrillation of proteins. Uptake of nanoparticles by biological cells may also stimulate pathways of oxidative stress and thus lead to inflammatory reactions at low levels. Clusters of nanoparticles may also prevent the correct association of nerve cells in vitro. As a consequence, a case-by-case approach is needed in order to predict reactions caused by nanostructures, which renders the establishment of safety regulations for nanoparticles difficult.

A further pitfall is the still lacking and worldwide accepted regulatory rules for approval of nanodevices. Prerequisites for approval procedures are widely accepted terminologies for medical, health and personal care applications of nanotechnology. As long as no clear rules for approval are available, companies hesitate to further invest in the development of nanodevices. Fortunately, efforts are currently made all around the world to solve this problem and therefore, nanotechnology remains one of the most promising innovations in life sciences today.

Hans Christian Anderson, the famous Danish author of short stories published the “The emperors’ new clothes” in 1837. Here, two scoundrels, who had heard of an emperor’s vanity, pretended to be extraordinary tailors and offered him a cloth so light and fine that it looks invisible. As a matter of fact it was invisible to anyone, who is too stupid and incompetent to appreciate its quality. The emperor took it for granted and presented himself virtually without clothes. A child finally unmasked the situation by stating: “…look, he is naked!” Nanofibres applied today, however, are indeed invisible to the naked eye. The old story of Anderson might have finally come true.