This article is related to the carotid approach for TAVI, and shows comparable outcomes in terms of 30 days mortality, strokes and vascular complications in 500 consecutive patients. Trans-carotid TAVI has become our first alternative in case of femoral contraindications.

TAVI is now a daily practice for the treatment of aortic stenosis. The question today is to choose the best approach for each patient.

All the competences of the heart team must be used to obtain the best results.

The common carotid artery: straight on to the aortic ring

Anatomical characteristics, like iliofemoral stenosis or abdominal aortic aneurysms, required to find another way to reach the heart safely for TAVI. Despite their good results, the classical alternatives such as the apical or aortic routes are not comparable to the femoral one in terms of surgical approach and operative burden. The subclavian artery is a fragile artery and with a delicate surgical control.

The common carotid artery (right or left), which is very simple to control, is a large artery offering a privileged access to the aortic ring.

Approached on its first centimeters, the proximity of the puncture point and the valve allows an excellent adjustment of the height of the prosthesis during the delivery.

Trans-carotid TAVI can be performed under local or general anesthesia.

Intervention is perfectly comparable to the femoral approach.

The optimised procedure, with radial puncture and stimulation on the left ventricle stiff wire, allows an early rehabilitation, without any danger of bleeding on the femoral artery.

A small drain (8Fr) is placed in the incision and removed on day one. Then, the patient benefits from the same post-operative monitoring protocol as femoral patients.

Simple as a femoral intervention

In a hybrid room or in the operating theatre with a mobile C-arm, the endovascular material is the same as the femoral route.

Pigtail angiography catheter is introduced in the aortic root through the radial or femoral artery under ultrasound guidance. Rapid pacing is done with a right ventricle probe introduced throughthe femoral or left jugular vein.

A straight guide wire, usually directed by an AL probe, is used to cross the aortic valve, and the SAFARI (Boston Scientific) is set up.

Installation for a carotid procedure with the Commander delivery system requires some space at the top of the patientbut does not present any particular difficulties.

The operating table is moved as far as possible towards the feet and an instrument table is placed on top.

If the OR is too small, the Certitude surgical introducer can be used. 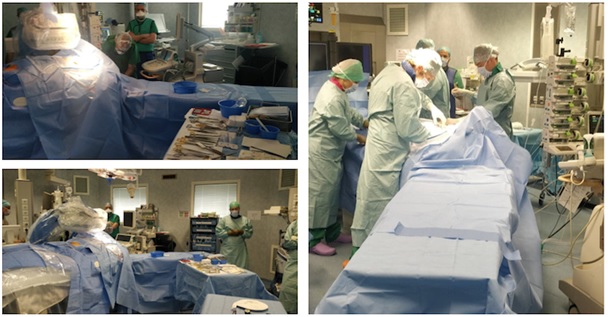 Once the common carotid artery is controlled, the sheath is introduced following a classic Seldinger puncture under visual control. 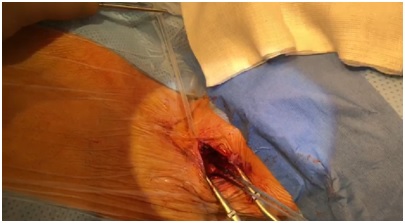 The introducer is then placed under fluoroscopic control in the aortic arch just above the ostium of the common carotid artery.

The device can be fixed with a stitch on the skin

The reactivity of the material is facilitated by the proximity of the puncture point and the straightness of the device. High placement of the prosthesis in the aortic annulus is thus easier, in the hope of limiting conductance disorders. 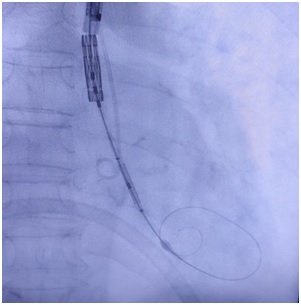 At the end of the procedure, the common carotid artery is surgically repaired with separate stitches of 6-0 Prolene, allowing non-stenotic restoration of the lumen.

Internal carotidstenosis was systemically assessed by supra-aortic Doppler ultrasound and in a few cases with a dedicated CT.

Comparable results and no more strokes

Our article(1), recently published in the European Journal of Cardio-Thoracic Surgery, compares 100 consecutive carotid patients with 400 patients treated through the femoral route in Nantes.

Our results corroborate other carotid series (2–5)and do not show a risk of stroke attributable to the carotid route, too often considered as a limitation.

The simplicity and encouraging results of carotid TAVI have gradually led us to use this approach routinely in patients not eligible for the femoral route.

Figure 4: Evolution of non-femoral approaches at Nantes University Hospital since 2015

The safety of the carotid route now demonstrated, it no longer seems reasonable to push the indications of femoral TAVI on poor quality vessels or on hard-to-reach vesselsas in obese patients.

The cohesion of the Heart-Team seems once again to be the only solution to propose the best for our patients. 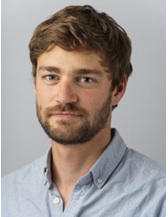 Basile MARIE is working as a thoracic and cardio-vascular surgeon,at Nantes University hospital in France. In this department, supervised by Pr Jean-Christian ROUSSEL, he performs with the whole team almost 80 surgical TAVI per-year with more than 90 per cent of carotid access. More than 400 transfemoral TAVI are done each year in this center, which makes it one of the largest center in France.