Takotsubo cardiomyopathy is an interesting yet uncommon heart disease which imitates the clinical presentation of an acute coronary syndrome. More recently, an increasing number of cases of takotsubo cardiomyopathy have been observed, which have been associated with the overlapping pathophysiological mechanism of the novel COVID-19 virus contagion.

To begin with, it is rather fascinating to know that Stress-induced cardiomyopathy was first studied in the Japanese population, wherein the unique name ‘Tako-tsubo’ was given to this cardiomyopathy, owing to the close resemblance of the shape of the ‘Takotsubo’ Japanese octopus fishing pot to the left ventricle in this disease. (Figure 1) 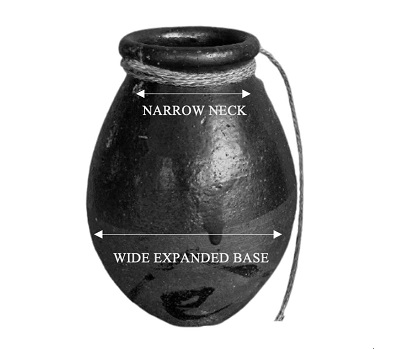 Most of the times, takotsubo cardiomyopathy is misdiagnosed as an acute coronary syndrome due to the overlapping stigmata of clinical signs and symptoms the patient presents with. However, that said, one needs to be mindful and careful at the same time in correctly diagnosing this disease and managing the patient accordingly.

The COVID-19 pandemic has impacted lives of millions of people worldwide, thereby causing a tremendous loss of life globally which has resulted in a diaspora of problems both on personal and professional levels. The negative energies and feelings of uncertainty that surround this pandemic has affected people’s health on different levels. While the COVID-19 outbreak has an enormous economic and social impact, it has also created a huge healthcare burden for physicians and organisations. Among patients, various cardiovascular health problems have been exacerbated and complicated by the COVID-19 virus, out of which takotsubo cardiomyopathy is one such entity.

The Disease- Process, Prevalence and Presentation
The exact cause of takotsubo cardiomyopathy remains unknown, but the main trigger factor is said to be a ‘stressful condition’ which exacerbates the onset of this condition. Interestingly, this condition is seen mostly in elderly women when they are confronted with a sudden stressful trigger mostly arising due to an emotional cause like a sudden bad news, death of a loved one, natural disaster etc. While emotional factors play a key role in women, it is the physical factors which predominate in men, even though they are not seen that commonly. But this does not rule out the fact that there are certain documented cases wherein takotsubo cardiomyopathy has been diagnosed without the presence of such an identifiable stressor.

As stated earlier, takotsubo cardiomyopathy is triggered by an emotional/physical trigger which in-turn encompasses a vicious cycle of excessive sympathetic activation and catecholamine discharge leading to myocardial injury and subsequent cardiac dysfunction. (Figure 2) 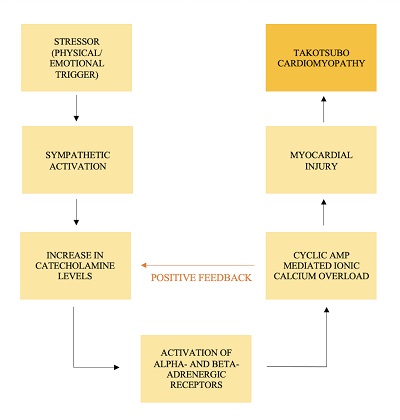 Takotsubo cardiomyopathy has been studied to have a prevalence of about 1-2 per cent in all suspected cases of acute myocardial infarction.(1, 2) Takotsubo cardiomyopathy also has a strong female predominance having a 9:1 female:male ratio, wherein 79.1 per cent of the patients are found to be over 50 years of age.(3, 4) Patients of takotsubo cardiomyopathy commonly present with acute onset chest pain and shortness of breath, but they may also present with palpitations, nausea and vomiting, oedema, syncope, hypotension and arrythmias.
The initial presentation of the patient is often confusing to a clinician; therefore, a thorough diagnosis is crucial in such cases!

The Key: Establishing Diagnosis
Even though there are no universally accepted criteria for diagnosing takotsubo cardiomyopathy due to lack of data and epidemiological statistics, some of the ones widely used are the Mayo Clinic diagnostic Criteria and InterTAK diagnostic criteria.(1, 5)

It is important for physicians to note that upon performing an ECG of a patient with acute onset takotsubo cardiomyopathy, one finds various abnormalities like ST-segment elevation/depression, T wave inversion, QT interval prolongation, Q wave abnormalities etc, but it is at this very instant that a comprehensive differential diagnosis be sought out and thoroughly discussed before proceeding forward.

It is the lack of awareness and correct knowledge about takotsubo cardiomyopathy that many physicians misdiagnose this disease. Although most of the suspected patients are commonly posted for angiography, it is to the surprise of physicians when they are not able to appreciate any significant obstructive coronary artery blockage(s) that may cause this condition, thereby finally ruling out coronary artery disease!

Even though there are numerous other investigations and imaging techniques that have replaced echocardiography as the gold standard, echocardiography still stands as the most widely used investigation of choice of physicians to diagnose takotsubo cardiomyopathy in different clinical settings wherein state-of-the-art technology and facilities might not be available. One can clearly appreciate the characteristic appearance of the left ventricle resembling that of a ‘Tako-tsubo’ in different views to confirm the diagnosis. (Figures 3 and 4) 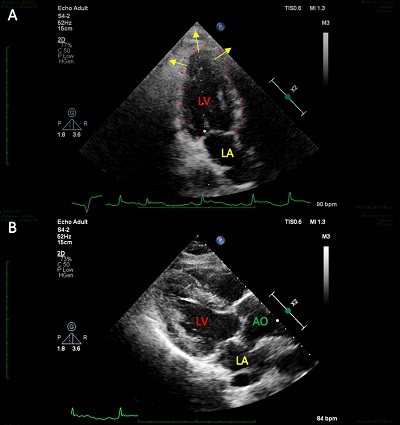 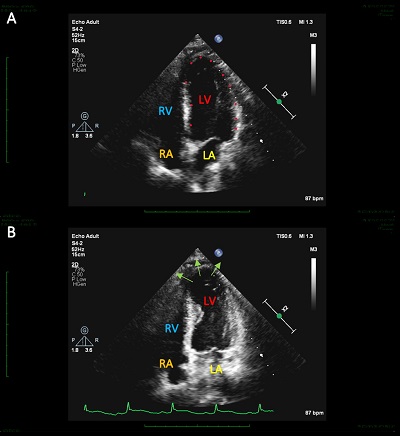 One shouldn’t stop here!
It is much more important for Cardiologists to note that these days takotsubo cardiomyopathy might not present as classical ‘apical ballooning’ of the left ventricle, but it can also have different presentations with respect to the part of the left ventricle involved like- basal, mid-circumferential, and focal or localised. A newly identified variant- ‘Reverse Takotsubo’ is becoming increasingly common in patients, and which depicts a total opposite presentation to the classical apical ballooning, i.e., it shows apical hyperkinesis and basal/inferior hypokinesis.

Management and Sequelae
Takotsubo cardiomyopathy usually reverses on its own and does not need much intensive interventional support, that said it has shown a minimal recurrence in some patients, and thus may also cause worsening of systolic/diastolic dysfunctions on a long-term basis.

The incidence of in-hospital complications and morality with takotsubo cardiomyopathy is limited, owing to the acute and majorly benign course of this disease. First like management should certainly include beta-blockers, ACEs/ARBs, antiplatelets, inotropes, diuretics, and other drug regimens which ease the cardiac work and support the circulatory system. Multiple treatments are also under trial currently, some of which have also tried estrogen supplementation in animal models owing to the role of decreased estrogen levels in post-menopausal age group as a possible etiological factor of this disease.

It is also important that the patient is stabilised and continuously monitored for at least 24-48 hours after the initial presenting episode, and later discharged with regular follow-up advice. Lastly, even though psychiatric counselling has not really been included alongside the main treatment options, but as the very origin of this disease lies with the stressor/trigger, counselling and therapy should now also be considered as a mainstay in such cases.

The COVID-19 Relation
The COVID-19 pandemic has undoubtedly caused an enormous harm to the physical, emotional, mental, and psychological well-being of people. The incidence of anxiety related, neurological, psychiatric, metabolic, and cardiovascular diseases has been on the rise ever since due to the psycho-social impact COVID-19 has on people. Unfortunately, the heart is at no mercy for this too! There has been an increasing number of cases of cardiovascular diseases which have largely been linked to the COVID-19 virus infection in patients.(6) This has resulted in not only triggering various facets of the disease process but also played a key role in complicating these cases.

The pure stress and anxiety which stems out of this pandemic situation has no doubt negatively affected the health of patients, rather worsened it by many folds. The so-called ‘cytokine storm’ which is triggered in the COVID-19 infection leads to a similar catecholamine surge and sympathetic activation in patients, the same process which is seen in takotsubo cardiomyopathy. This results in vascular inflammation, cellular damage, and microvascular & endothelial dysfunction. A recent study showed that the incidence of takotsubo cardiomyopathy increased from a pre-pandemic range of 1.5-1.8 per cent to an astonishing 7.8 per cent during the COVID-19 pandemic.(7) This not only indicates the possible linkage of the virus with takotsubo cardiomyopathy, but also outlines the globally increasing burden of this disease.

The mere fact that the word ‘COVID’ is itself a potential stress trigger in patients, especially in the elder age group, is worrisome. COVID-19 and takotsubo cardiomyopathy share a common disease course in terms of the excessive release of catecholamines, which in-turn affects not only the cardiovascular system, but also other organ systems. However, a major limitation to establishing this relationship is the paucity of data and limited studies done in this arena.

Hopefully, future studies will not only help in providing a better clarity on this matter but also help in formulation of primary preventive strategies and possible treatment options to achieve a better prognosis in patients.

The Mantra: Heart Care for Holistic Health
It is not new for mankind to have been exposed to such stressful situations, but what is more important is the way one handles and deals with the same. It is truly very important for one to understand that each single disease, no matter what, arises from an imbalance in the normal functioning of the body and if one identifies and treats this abnormality, the disease will cease to exist on its own!

A verse from Charaka Samhita states: “One can never attain the fruits of rasayana (promotive health) if he is not undergone grossly the process of elimination of his physical as well as mental impurities. The formulation meant for providing longevity and alleviating senility and diseases succeed (only) in patients having purified mind and body and controlled self.”

Integrative approach to positive health against cardiac ailments as prescribed by the ancient Indian physicians and traditional medical literature have time and again repeated the following mantra for healthy well-being :-

Simple steps to overcome the disease at a personal level include: quitting smoking, minimising alcohol consumption, controlling conduct, attitude & behaviour, practising positive habits and ensuring an adequate sleep cycle. In addition, there are certain important things that one should always keep in mind to allay the burden of such diseases which interfere with the mental well-being of a person. Some of these are- looking for the cause of the disease, not ignoring any symptoms, seeking proper guidance, adopting exercise in one’s daily routine, understanding the inner-self & mind-body interplay, and last but not least; practising a ‘Balanced lifestyle’.

Even though takotsubo cardiomyopathy is a clinically significant cardiac condition, it still remains under-recognised in the medical fraternity. It is crucial to timely diagnose takotsubo cardiomyopathy in order to manage the patient in the correct way and avoid any complications, thereby helping in a better prognosis. While, there is a link which has been established between takotsubo cardiomyopathy and the COVID-19 virus, it needs to be further studied and elaborated. Lastly, one needs to treat such cardiovascular conditions in a multi-dimensional fashion in an effort to not only stop the disease process, but also to ensure and maintain the well-being of a patient.

Positive efforts aimed towards investing in one’s own health will definitely reflect in a 5R- Health, Happy, Harmonious, Hearty and Holistic Lifestyle! 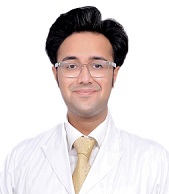 Amanpreet Singh Wasir is currently a medical student (MBBS) at Bharati Vidyapeeth University & Medical College, Pune, Maharashtra, India. He has published clinical research work in the field of Medicine, particularly Cardiology, in National and International Journals. Amanpreet is associated with various leading medical organisations and an expanding network of medical professionals globally. His principal focus is to work towards ‘Holistic and Preventive Medicine’ in the forthcoming years.