Advances in cross sectional imaging using CT and MR have significantly changed the clinical practice of neuroradiology over the last decade. Powerful imaging investigations such as functional MR, MR tractography and PET CT allow detailed functional and morphological analysis of the patient\'s central nervous system. This article reviews some of these important advances and how they impact on daily clinical practice. 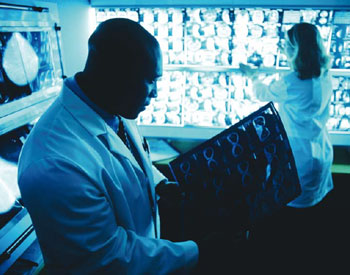 Current state of the art 64 multi-detector CT imaging provides images with a minimum isotropic spatial resolution of 0.6mm. This means that the brain scans can be reconstructed in any plane without significant artifacts. The brain can be scanned in a few seconds and reconstructed in any plane with a slice thickness of less than 1mm if indicated. This excellent spatial and temporal resolution has provided the technology to make CT brain perfusion and CT angiography of the cerebral vessels feasible. CT cerebral perfusion allows the stroke physician the ability to quantify the size and extent of the cerebral infarction at the same time as the initial CT examination is performed. This information is critical if thrombolytic therapy is being considered to identify regions of infarcted brain and surrounding ischaemic but still viable brain that can be rescued. CT angiography of the Circle of Willis provides images of the cerebral arteries of sufficient diagnostic quality to detect small aneurysms above 5mm in diameter and to detect the nidus of cerebral vascular malformations. This provides the interventional neuro-radiologist three-dimensional details of the aneurysm morphology, the size and position of the aneurysm neck and presence of mural thrombus within the aneurysm. These details are important before endovascular occlusion of aneurysms or vascular malformations with coils or occlusive glue is attempted. The main disadvantage of CT perfusion and CT angiography is the much higher radiation dose to the patient, especially to the lens of the eye and the thyroid gland. Despite the recent adverse publicity in the United States concerning CT radiation doses, there is no doubt that the careful use of CT imaging with modern X-ray tube dose modulation techniques is a major advance in neuro-imaging over the last decade.

The recent trend in using 3 Tesla high field MR systems to image the nervous system has meant that images of the brain and spinal cord have now a significantly improved signal to noise ratio. These images have significantly better contrast resolution when compared to 1.5 Tesla high field MR systems. Three Tesla MR systems appear to be the standard in neuroradiological practice today. Moves to higher field 7 Tesla systems may be some time away given the safety concerns over the higher specific absorption ratio (SAR) and higher and faster changing gradient strengths (faster slew rates) affect on peripheral nerves.

The most exciting research fields in neuroradiology have been the development of MR tractography of the brain and spinal cord and functional MR imaging (fMRI). Tractography is based on the imaging of restricted diffusion of water molecules across the myelin sheath cell membranes of axons but unrestricted diffusion within the length of the axons. This has allowed visualisation of white matter fibre tracts in the brain and spinal cord in many different disorders. Abnormal fibre tract connections have been demonstrated in congenital neuronal migrational anomalies of the brain, behavioural disorders such as autism and even psychiatric disorders such as schizophrenia. Tractography of the spinal cord is now possible on 3 Tesla systems with the development of cerebrospinal fluid motion nulling software.  Images of fibre tract disorders in white matter disorders such as multiple sclerosis, tumours of the spinal cord and spinal cord trauma are now possible.

Functional MR imaging has moved from a research investigation into clinical practice. This technique depends on the principle that neuronal activation of the cerebral cortex increases the regional blood supply within the brain and there is an increase in the percentage of oxygenated haemoglobin (HbO2) in the blood vessels supplying that region of cortex that is activated. This has allowed researchers to investigate many psychiatric and cognitive disorders including Alzheimer’s disease and schizophrenia. In clinical practice it is now possible to map out the eloquent motor and sensory cerebral cortex before brain tumour resections are performed. Functional imaging of the spinal cord is now possible on high field 3 Tesla systems. It is used to identify spinal cord motor neuron activation in the corticospinal tracts for pre-surgical studies.

MR spectroscopy measures important metabolites in the brain and their relative quantities as a ratio compared to an internal standard of creatine. The important metabolites of N-acetyl aspartate, choline, creatine, myoinositol and glutamine can be measured non-invasively. This technique is particularly useful in the evaluation of cerebral tumours, cerebral inflammatory lesions such as abscesses and granulomas and metabolic disorders of the brain. With tumours, especially cerebral lymphoma, there is increased turnover of cell membranes in tumour cells so that choline, an essential component of cell membranes, becomes elevated. Spectroscopy is useful with CT-PET scanning in detecting tumour recurrence versus gliosis after surgery, chemotherapy and or radiotherapy for malignant brain tumours such as glioblastoma multiforme. 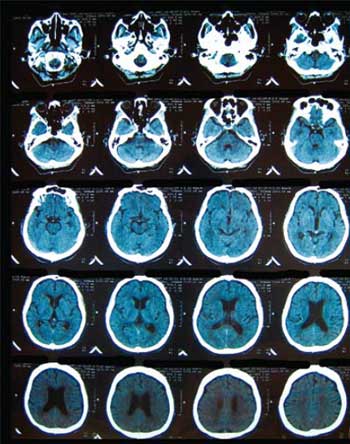 Positron Emission Tomography CT using 18F fluoro-deoxyglucose (18F FDG) isotope has advanced the detection and staging of central nervous cancers. 18F FDG is metabolized in the initial stages of the Krebs cycle by hyper-metabolic cancer cells where it produces two positrons that can be detected by a gamma camera within a CT gantry. It is particularly useful in differentiating recurrent brain tumour from gliosis.

The development of new positron emission isotopes such 18F flutematamol (clinical trial NCT01028053) to detect amyloid deposition in the brain have provided the first diagnostic imaging investigation of early preclinical Alzheimer’s disease. It will soon be possible to detect Alzheimer’s disease before the patient presents with symptoms of cognitive decline, so that patients who have a family history of the disorder will be able to be screened for Alzheimer’s disease in the near future.

Glioblastoma multiforme tumours are now being treated with anti-angiogenic drugs such as cilengitide so that there is a need to measure tumour response using imaging. Current research in new molecular markers of neo-angiogenesis has resulted in the first clinical trials of positron producing isotopes that bind to integrin receptors in tumours. These isotopes will be able to document the tumour response to these new anti-angiogenic drugs.

Advances in imaging technology have resulted in a better understanding of neurological disorders and have advanced neuro-imaging from a purely anatomical to functional assessment of the nervous system. New PET isotopes hold the promise of molecular imaging of the brain in disorders such as Alzheimer’s disease before the patient presents with symptoms. 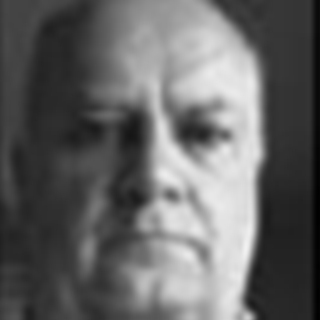 Peter Corr is a consultant radiologist at Al Ain and Tawam Hospitals and Chairman of Radiology at the UAE University since 2005. He was trained in Cape Town, S Africa with fellowship training in neuroradiology. His areas of interest are non invasive cardiovascular imaging, neuroimaging of infections, sonography, sports injury imaging and radiology education. He has published 75 peer reviewed articles, 7 book chapters and one textbook.