Devices containing artificial membranes for the treatment of kidney disease lack the ability to replace or augment metabolic and endocrine functions, which are non-selective and biologically reactive.

The ability to separate molecular species in a solute using a membrane was first described by Thomas Graham in 1861, and today the process is widely used in a variety of industrial and clinical applications. In the latter, commonly used applications are: plasma separation, oxygenation and the augmentation of renal function (Haemodialysis). In plasma separation, 2-3 litres of plasma is removed from the patient during treatment and replaced. The frequency of the treatment and the volumes exchanged depends onthe disease being treated and the patient's response to the treatment. Membrane oxygenation is used during cardiac procedures or also over extensive periods to provide support for patients with pulmonary distress. The most widely used application is haemodialysis, a treatment that is generally performed three or more times a week to sustain life. In haemodialysis, the membrane ontained within a haemodialyser, or artificial kidney, acts as a selective barrier between two phases, regulating the transport of substances, which occur as a consequence of concentration difference across the membrane. Variations of this concept are the newer modalities of treatment, which introduce an element of convection to the process. Such approaches, however, retain their reliance on a membrane, but tend to utilise membranes with a high hydraulic permeability (Table 1).

The manufacture of membranes has been optimised to produce materials with a tightly modulated pore size distribution.

Currently used membranes and demography of their use

Early experimental dialysis treatments used membranes based on cellulose, namely, collodion formed from the mixture of cotton, sulphuric and nitric acid redissolved in alcohol. This material is difficult to produce, sterilise, is subject to leakage and has a lack of consistency with respect to the pore size. All of this contributes to its limited clinical application. By the early 1940s, cellulose was manufactured using the viscose process replacing collodion. With the availability of a reliable method of vascular access in the 1960s, treatment of renal failure became more widespread and retained its reliance on membranes manufactured from cellulose. Widely used membrane variant being Cuprophan, used primarily in a flat sheet or tubular form. By the late 1960s, technology became available to produce such membranes in a hollow fibre format, which is used almost universally in the treatment of renal failure. 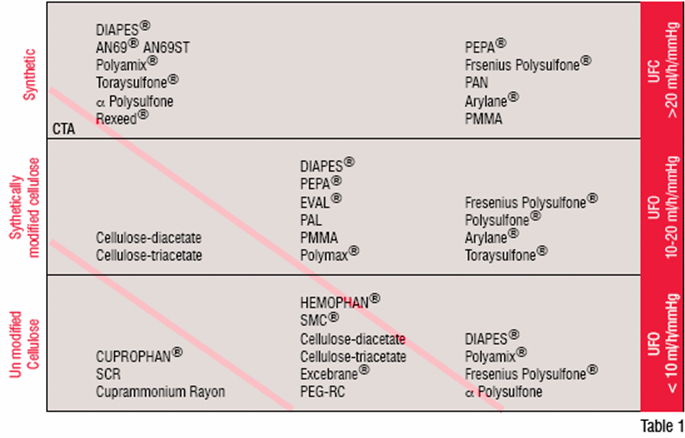 The poor biocompatibility of cellulose-based membranes was found to be due to the presence of OH or hydroxyl chemical groups on the membrane surface and modifications either by chemical replacement of groups, or by the grafting of polyethylene glycol chains onto the membrane ensued. The structural modifications used may be tertiary amino groups such as Di-Ethyl-Amino-Ethyl (DEAE) or acetate groups as used in the production of cellulose acetate or cellulose triacetate with the magnitude of the hydroxyl group substitution varying between 1 and 100 per cent.

Synthetic membranes are produced by the chemical transformation of polymers, which may be either hydrocarbon or heterochain. One, two or more polymers may be mixed to produce the membranes, which can be symmetric, whereby both sides of the membrane are identical in structure, or asymmetric. In asymmetric membranes, a thin dense inner layer normally in contact with the blood overlies a porous substructure. As the base materials used in the production of synthetic membranes tend to be hydrophobic, the manufacturing process involves their blending with a hydrophilic material, generally, polyvinylpyrrolidine (PVP). Such membranes due to their different surface structure compared to cellulose-based membranes, are generally more biocompatible, but currently no membrane is available for clinical use, which is inert.

To curtail costs, haemodialysers were historically reused on the same patient. Whilst this continues, globally, the number of patients treated with reused dialysers decreased steadily from around 34 per cent in 2000 to 26 per cent in 2005, a development that was driven primarily by the abandonment of reuse in many clinics in the USA and in Eastern European countries.

It has been estimated that the global growth rate of haemodialysis is around 6 per cent per annum, with trends observed to date dominated by economically well-developed countries, such as the USA, Japan and Germany. Based on the status as of 2005 and the observed growth rates, the emerging picture of dialysis treatment in the year 2010 is one with a global population approaching two million patients, furthermore it is estimated that by this time around 800,000 of the patients receiving treatment will be living in countries that are presently defined as low- or middle-income countries.

Membranes, whether they are manufactured from cellulose or synthetic materials, are subject to limitations in their solute transport characteristics. Membranes may be considered as porous structures that act as non-selective molecular sieves i.e. molecules of a specific molecular weight, the membranes cut-off weight (~25kD) traverse the membrane irrespective of whether they are implicated in uraemia or not. The rate of solute transport across the membrane is inversely proportional to the square root of the molecular weight of the chemical species. This means that a molecule such as B2 microglobulin, a compound with a molecular weight of 15kD implicated in the evolution of long-term problems associated with regular dialysis therapy, diffuses approximately at 7 per cent of that for urea (60 daltons) and clearly highlights the limitations of membranes in removing larger molecules. In both cellulose and synthetic membranes there is a distribution of pore sizes. Increasing this distribution means that whilst there may be an improvement of middle-size molecules, there will also be loss of proteins such as albumin, unless the pore size distribution is tightly controlled. The issue of protein leakage in high flux membranes has long been recognised. Today, protein-leaking membranes are available and have been used in a small number of clinical trials in which improvement in anemia, decreased plasma total homocysteine and reduced plasma concentrations of glycosylated and oxidised proteins was demonstrated. It remains unclear if routine use of such membranes is warranted.

Today, manufacture of membranes has been optimised to produce materials with a tightly modulated pore size distribution, thereby improving the removal of specific compounds. However, such manufacturing alterations cannot be leveraged further to generate improvements in selectivity. An alternate approach to improving solute transport is to move away from the circular or elliptical pores to a rectangular slit, an approach that offers considerable advantages in terms of solute transport.

In membranes used in the treatment of chronic kidney disease, the primary focus has been to improve removal of metabolites from blood. However, in a haemodialyser, the blood side of the circuit is sterile, but the dialysis fluid side is not. Unless the water distribution system is cleaned on a regular basis, a potential for the development of a biofilm within the water distribution network, as well as the hydraulic circuit of the dialysis machine, leading to the release of endotoxin fragments and bacteria exists. Bacteria, due to their size, cannot cross the membrane but endotoxin fragments are able to do so. And this has raised concerns that membranes with a large pore size may confer a risk to the patient of exposure to cytokine-inducing bacterial substances in the dialysate, thereby contributing to the micro-inflammatory state of patients undergoing regular dialysis. A number of studies have demonstrated that such transport across the membrane is dependent not just on the size of the pores, but also the membrane material, due to the ability of synthetic membrane materials to absorb cytokine-inducing bacterial substances.

Membranes used in the treatment of chronic renal disease are manufactured in large quantities and their production has been optimised. However, currently used membranes are at their limit with respect to transport characteristics, although some improvements are possible with the use of slit shaped geometries, rather than the currently used cylindrical pore configuration or by the development of membrane absorbers. Alternately, the surface grafting of macromolecules to capture solutes of interest may also offer solute transport enhancement.

With respect to biocompatibility, current approaches aim to minimise or suppress the patho-physiological mechanisms by the shielding or manipulation of the hydrophobic and hydrophilic domains in the polymer blend. Whereas this approach yields positive results, totally inert membranes are not yet available.

Finally, it should be stressed that all currently used membranes lack the ability to provide replacement or augmentation of the human kidneys, metabolic and endocrine functions. This issue is now being addressed as polymeric membranes offer a considerable potential as supports or anchors for cells.

Nicholas Hoenich is a scientist University of Newcastle upon Tyne. He serves on the Editorial Boards of several bioengineering journals, is a member of the Research Committee, British Renal Society, and expert advisor to the Medicines and Healthcare Products Regulatory Agency for the UK. He is the author of over 100 peer group reviewed publications and has contributed to several textbooks dealing with the treatment of renal failure.